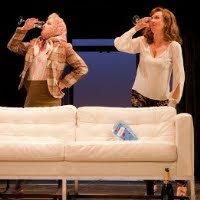 The RSC's big Christmas show this year is an all-guns-blazing Merry Wives of Windsor, although the seasonal feel is more Halloween - complete with jack o'lantern in a window - than Christmas. Phillip Breen's modern dress production comes straight out of the pages of Country Life, with wives in scarves and high-heeled wellies, and huntin', shootin', rugger-playing husbands. Legend has always had it that Elizabeth I herself requested that Shakespeare write The Merry Wives of Windsor, wanting to see Falstaff in love. If that old story were true, Shakespeare would probably have met with a sticky end because that's not what's provided here: Instead the fat old knight from Henry IV is very much in lust, with two married, upper-middle-class women. They're better friends than he realised though, and on discovering he's sent them both identical love letters decide to lead him on, and into embarrassing and increasingly public mishaps.

Where last summer one basic set served, with variations, for three different productions, here the production's status as a big holiday special is made clear with the amount of money that's been spent right there to see on stage: Max Jones' set design, with its houses, pubs and playing fields, a working Citroën 2CV and a full-size red phone box that appears for a matter of moments, is the most elaborate I've seen on the new-style diving board stages. It's not that surprising that it was so hard to install that the first few previews had to be cancelled. 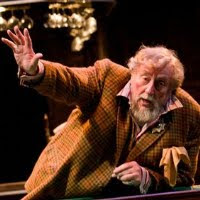 Also extravagant in its way is the casting, which isn't packed with star names but plenty of familiar and experienced theatrical faces. Eleven years after playing Falstaff in the Henry IVs at the RSC, Desmond Barrit finally returns to the role for the spin-off. It's a joy to see Barrit on stage again (what with him having made something of a career in recent years of replacing Richard Griffiths in Alan Bennett plays I'd already seen, it's been a while since I've caught his work.) He's robust and enthusiastic as the jollier take on Falstaff we get in this play, although there's flashes of the melancholy undercurrent from the History Plays; and there's certainly a feeling that the wives' revenge on a drunk old man outweighs the offence. (Is there a general consensus on when, in relation to the Henriad, Merry Wives is set? My feeling is, and this production seems to agree, that it's well after Hal's rejection, with Sir John retiring to the suburbs and trying to make the best of what he's left with; perhaps this final embarrassment is the last straw before his sad demise.) Barrit brings a lot of desperation and energy to the big humiliating setpieces, and Falstaff's relentless sense of keeping on going despite all signs that he should give up. 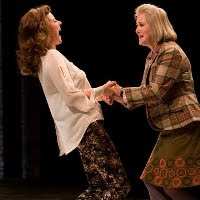 The casting of the titular wives is also inspired. The warmth and sense of mischievous fun of Alexandra Gilbreath as Alice Ford contrasts perfectly with Sylvestra Le Touzel's icy deadpan as Meg Page. One of those pairings where I kept going back and forth as to which was my favourite of the two performances. Elsewhere, Anita Dobson's Mistress Quickly becomes a slightly dim, meddling doctor's receptionist, trying to match-make Page's daughter Anne with all three of her suitors at once. As Anne herself Breen has brought along Naomi Sheldon from his production of Sex With A Stranger, while John Ramm is appropriately frantic as the ever-suspicious, jealous Frank Ford, leading to a lot of silliness with the hamper's worth of underwear being flung all around the auditorium. (When actors are clearly trying to clear stuff from the stage by chucking it into the audience, why are some audience members so determined to throw it right back on stage? Do they think they're being helpful? I think they'll find the ushers have been warned there might be some bras and pants to be cleared up after each show.)

Cute recent drama school graduate Calum Finlay is a stuttering hipster as Anne's main suitor Shallow. Although I was slightly confused by his arm being in a sling: When he first appeared with it I figured it was a reference to the beating he's had just before the play starts. But when it was still there after the interval I wondered if it was real and he was the latest victim of the Curse of the RSC. And then the sling was gone for the finale so maybe my first guess was correct and he didn't have a bicycle-related injury after all. 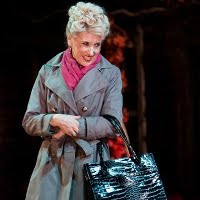 The Merry Wives of Windsor isn't generally regarded among the best of Shakespeare's comedies but if done right it can be a lot of fun. And it's done right here - with the more slapsticky elements of the comedy going at full tilt, and the script's delight in malapropisms (I don't think I'd spotted before just how many different characters in the play share that trait) more matter-of-factly brought out. Like most Shakespeare comedies, and even more so most farces, it takes a while to get going, but this was one of those productions where about half an hour in I realised that I'd fallen for the show's gentle charms.


The Merry Wives of Windsor by William Shakespeare is booking in repertory until the 12th of January at the Royal Shakespeare Theatre, Stratford-upon-Avon.