PREVIEW DISCLAIMER: Blackta invites the official critics in next week. 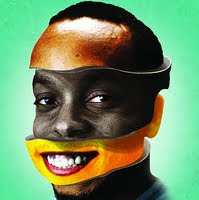 Nathaniel Martello-White, who was a rather good Lysander at the RSC last year, is a black actor - or, as the title of his playwrighting debut has it, a Blackta. He paints a pretty bleak picture of it as a profession in this play, which follows four black actors who are friends, but a friendship tinged with aggression and professional rivalry, often going up against each other for the same roles and trying to make their rivals nervous: They're constantly coming up with new gym regimes and diets to give them an edge, and fretting over just how black is too black to appeal to a casting director. The latter fact also gives the characters their names: There's the fiery Brown (Anthony Welsh,) laid-back Yellow (Howard Charles,) apparently indestructible Black (Daniel Francis,) and the butt of their jokes, the fantasist Dull Brown (Javone Prince.) For all the difficulties they face getting jobs now, an even grimmer fate seems in store for them with age, as in the background sits Older Black (Leo Wringer,) permanently waiting for a callback that never comes.

The central conceit of Martello-White's play is that while the relationships between the friends are played out pretty naturalistically, the process of auditioning is turned into a surreal reality show: Their predicament is treated as a building they might be finally let out of if they get the one job that'll propel them to stardom. Every so often one of them is called up to an upstairs level, where in front of an unseen audition panel (nicknamed The Thing) they perform tricks (origami, quick-changes, skipping rope - those months of boxing training for Sucker Punch coming in handy for Welsh) or cliched scenes (Prince's "victim tied to chair" is a highlight.) Then they await their fates - a red light is a no, amber a callback, green means they've got the part and "the greenest of green lights" their ticket out of there.

In recent years the Young Vic has been successfully positioning itself as the place to go for radical interpretations of classic plays, with new writing on the back burner, usually only appearing in co-productions with visiting companies. And artistic director David Lan, who directs here, is looking a bit rusty in his skills with new work. Because Blackta is full of cleverly-written scenes, funny lines, interesting ideas and characters; but from quite early on I found myself wishing it had been more rigorously edited. Martello-White's better with character than he is with story, and the fact that the latter never really materialises is made more apparent by the show's length. The play repeats a lot of its points, for which it's hard to point fingers at the writer as it seems to be a common mistake made by first-time playwrights; but I can't help feeling that a more specialised new writing venue like the Royal Court or even Hampstead would have taken it more firmly in hand and cut some of the flab. A protracted Star Wars sequence is very entertaining but could have been cut in its entirety (although talk about good luck, having the play open in the same week as Episode 7 is announced!) and there's a nasty streak of homophobia to the characters that comes out of nowhere then vanishes again to no apparent end.

Still, there's a lot to recommend a very well-acted show with some sharp writing and a clever set from Jeremy Herbert that gives the impression of a much bigger stage than the Maria actually has. But it's also one of those frustrating occasions when it feels like an incisive 90-minute play is hiding inside a somewhat sloppier 120-minute one.

Blackta by Nathaniel Martello-White is booking until the 24th of November at the Young Vic's Maria.