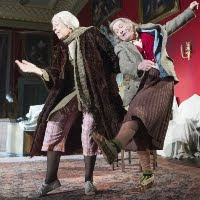 Inevitably one of the biggest theatrical events of the year was always going to be the premiere of the new Alan Bennett play, the latest in his long-standing collaboration with the National Theatre's Artistic Director, Nicholas Hytner. People also reunites Bennett with Frances de la Tour, who had memorable supporting roles in both The History Boys and The Habit of Art, and here gets her turn centre stage. The setting is a crumbling country pile somewhere in South Yorkshire. The house and most of its contents are, in theory, priceless, but death duties have left little money to actually take care of the place, and it's now an unheated mausoleum, occupied by two batty old ladies: Dorothy (de la Tour,) the owner, who lives a virtual hermit's life and only keeps up with "current" events via a pile of newspapers from 1982; and her even battier friend Iris (Linda Bassett,) who sits in a world of her own knitting scarves for the troops (Dorothy's informed her there's a war on in the Falklands.) 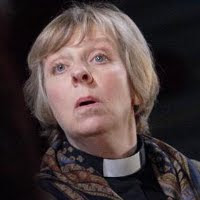 People is concerned with what to do with the big old house, and is largely Bennett's satire of the National Trust. Dorothy's sister June (Selina Cadell,) a Church of England archdeacon, is insistent that the house be given to the Trust to take care of. Dorothy thinks June only wants it to become public property because she didn't inherit it herself, and is looking at other options: Bevan (Miles Jupp) is an auctioneer evaluating the contents of the home, which could fetch enough to keep it running. But he also represents a shadowy "Concern" that are interested in buying the house and moving it brick by brick to the South of England for mysterious reasons of their own. The audience was clearly there for Bennett's famous flashes of biting wit, and lapped them up when they came, but actually this is a show pretty low on the one-liners. Not a problem in itself, but I found the pace of the whole first act to be rather slow. With the exception of the miscast Jupp, who brings no real spark to the snake-oil salesman, I didn't find the cast to be the problem; rather that by the time the curtain comes down for the interval I felt we'd spent the entire first hour having the scene set for us. 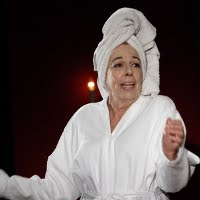 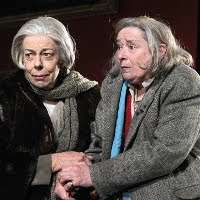 With various objects being used to comically obscure Pearce's and his co-star's (Jess Murphy) genitals, not to mention the unfortunately-timed arrival of a Bishop (Andy de la Tour,) Bennett is self-consciously playing with the standard tropes of farce in these entertaining segments. Another reason I liked the second act better may be because I could see the scene-stealing Bassett better (in the first half she mainly stayed in the one chair, obscured by the head of the person in front of me.) Her facial expressions are a highlight, not least of all when presented with Colin's professional talents. But overall People is a bit of a curate's egg, and a strange mix of various different styles from Bennett's past career. By the end I was reminded of Enjoy, the early flop (more successfully revived a couple of years ago) where he seemed to preempt reality TV by a couple of decades with the story of a working class family put on public display; this time the surroundings are a bit grander, and it's history that's being Disneyfied and given a price tag.

People by Alan Bennett is booking in repertory until the 2nd of April at the National Theatre's Lyttelton (returns and day seats only for performances up to the 9th of February.)