Vanya has spent his life looking after his late sister's estate, taking a pittance for himself and sending all the profits to support his brother-in-law: An illustrious professor, Serebryakov has been a source of pride to the whole family. But when Serebryakov remarries and retires, he decides to move himself and his new young wife Yelena to the country estate that's been supporting him all these years. As Uncle Vanya opens, the title character (Ken Stott) has started to see that the professor (Paul "WHO THE FUCK ARE YOU?" Freeman) is a hack who's contributed nothing to his field and will leave no legacy. Chekhov's play looks at what happens when Vanya begins to realise that if the man he's sacrificed his life's work to is a nonentity, his own life's been a waste. Meanwhile the beautiful but listless Yelena (Anna Friel, like I just got home, Anna Friel) enraptures both Vanya and the local doctor. 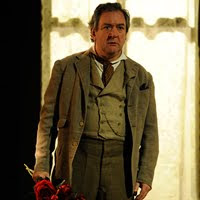 There's been some inventive takes on Chekhov's plays lately, but with a big-name cast in a West End theatre it was never likely that Linsday Posner's production would be one of them. And this is a very traditional-looking Uncle Vanya - Christopher Oram's solid set designs necessitate lengthy pauses between the acts as the curtain falls and a different part of the house is brought onstage. If the detail in Oram's designs had been matched in other areas of Posner's production, then this old-fashioned approach might have worked all right. But the surface is all there is here, which in a play so much of which happens below the surface is catastrophic. Stott's performance is strong, but his dial's turned to "angry" almost constantly. Samuel West, sometimes accused of being a bit of a cold performer, is a good match though to the distant Dr Astrov, an alcoholic and proto-environmentalist. And Anna Carteret's grand old lady is a strong presence, if only she appeared in the play more. None really feel like they've got under their characters' skins though. 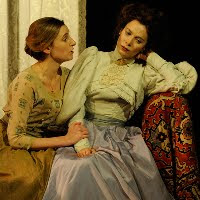 But the production's problems are clearest in Laura Carmichael as Vanya's niece Sonya. The production is destined to be overshadowed by elderly director Peter Hall's "heckling" of Carmichael on Press Night, when he dozed off, only to wake up thinking he was in one of his own rehearsals, and loudly critiquing her performance from the stalls. The dozing off I can certainly understand - next to me Jim nodded off for a few moments in the second act, and the sound of snoring elsewhere says he wasn't alone. And no wonder as Carmichael is a rather blank stage presence. Often when something's lacking in a performance it's hard to pinpoint but this is one of those rare occasions when it's possible: When Dr Astrov says's there's not one person he cares for any more and Sonya asks him if there's any exceptions, Sonya's feelings for him are blindingly obvious to everyone except the doctor and, it seems, Carmichael herself. When Astrov obliviously replies in the negative, there's only blankness where there should be heartbreak.

I don't know if the lack of depth to the characters originates with Christopher Hampton's translation of the play, although I'm sure it isn't helping. There's certainly something particularly dry and humourless to the script, which is particularly ironic given the production's being promoted with the tagline "laughter is a great healer" and an emphasis on Chekhov's comic side. 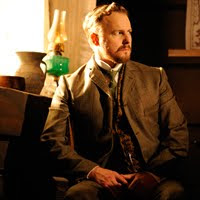 Things are a bit livelier in the third act when there's more stuff actually going on, but to care about that we really need to know who these people are by then, and we don't. As well as his taking a nap during Act Two, Jim wanted it noted that when Stott's gun ran out of bullets in Act Three, he was more than willing to go up on stage and reload for him. Actually I think even more telling is what Jim did near the very end of the play, as we were on an aisle and I saw him getting distracted by something on the stairs, his eye kept wandering further down the steps and I thought he'd spotted a mouse on the stair (well I declare.) I looked but couldn't see it myself, and when I asked him after the show had ended if it had indeed been a mouse, he said he thought so, but it might have been a trick of the light. Basically, so engrossing was the climax of this production that Jim was more entertained by a mouse that MIGHT NOT ACTUALLY HAVE BEEN THERE.

Uncle Vanya by Anton Chekhov in a version by Christopher Hampton is booking until the 16th of February at the Vaudeville Theatre.

PS: Nimax Theatres continue to have the worst-trained FOH staff. A man further along our row received two loud text messages, which is distracting. But not as distracting as the usher who clambered over the women sitting in front of us to walk up to him and ask him to turn it off. What makes it worse is it was moments before the end of the first act. If FOH were up to speed on the play in their theatre, they'd have known that if he had to do this, he could have waited and done it during the minutes the audience were left staring at a black curtain.
Posted by nick730 at 23:05