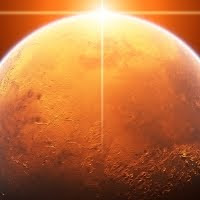 When the Finborough played host to the Papatango playwrighting competition for the first time last year, they went for an ambitious programme of staging, alongside the winner's month-long run, week-long runs of the other three finalists. This year they've reined things in a bit, with a couple of rehearsed readings of finalists, but full productions for the top two plays, running in repertory. First, the runner-up, Tom Morton-Smith's Everyday Maps for Everyday Use.

The soundtrack as the audience enters is a selection of Bowie's more space travel-fixated songs, as the play is set in Woking, where HG Wells had the aliens first invade in The War of the Worlds, and Morton-Smith's characters' lives, ambitions and sexual inclinations are all in some way or other tied up with Mars; the play follows the various ways the six people's lives intertwine. 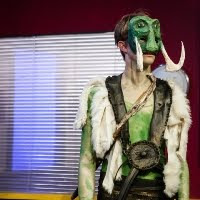 John (Michael Shelford) is a cartographer, working on updating the A-Z, and enjoying the way changing maps reflect the world's changes. His former university friend Behrooz (Moncef Mansur) has stopped mapping the Earth, and is now an artist painting maps of the unchanging Martian landscape. He's being exhibited in the gallery run by Corinne (Cosima Shaw,) a single mother with a fondness for tying up men she meets online. Her teenage daughter Maggie (Skye Lourie) is finding that she has a fetish for Japanese Anime about sex with aliens' tentacles. Maggie's geeky best friend Kiph (Harry Lister Smith) is in love with her, and so trying to get his head round her kink which creeps him out. He himself prefers the cosier Mars of a creaky 1970s sci-fi show, whose star Richard (Michael Kirk) is in town for a signing. The sextet have a number of sometimes surprising ways in which their lives cross over, and Beckie Mills' production picks up on all the humour in Morton-Smith's script, which came across despite the audience being a bit thin on the ground this afternoon. 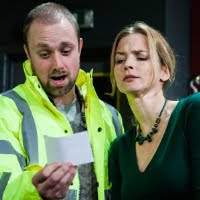 But the play also has some interesting and insightful things to say about sexuality, and the way in which the internet and fan fiction have opened the floodgates to finding out, and bringing into the mainstream, the fetishes people previously might have they were alone and "perverted" in. A major point of interest in the play is the sometimes thin line between what is considered a harmless sexual kink and what is a socially condemned perversion. This particularly comes to the fore in the relationship between John and Behrooz, which soured when the latter discovered John had downloaded fanfic whose contents could be potentially illegal, but a whole new light is shed on the situation by Behrooz's feelings for Maggie. Shelford is here given a very on-the-nose (perhaps a bit unsubtly so) speech about the press' hypocritical attitudes towards paedophiles and barely-legal starlets. 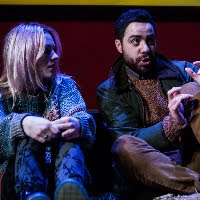 Maggie herself could have problems much greater than it appears when we first meet her, and Lourie gives a fantastic performance as we learn how deep-seated her insecurities are, how much the names she gets called at school have defined her, and how much her mother's attitude of wanting to be her daughter's best friend has missed exactly the kind of development it was meant to support. Parent-child relationships crop up elsewhere in the play as well, as Richard bemoans how badly he dealt with his own son's coming out to him, and John wonders if the sexual feelings he's ashamed of will make him a bad father to his unborn child. Everyday Maps for Everyday Use is a multi-layered piece with no easy answers that entertains even as it sometimes disturbs, and will hopefully get the bigger audience it deserves as the run continues.

Everyday Maps for Everyday Use by Tom Morton-Smith is booking until the 22nd of December at the Finborough Theatre.