Theatre review: In the Republic of Happiness 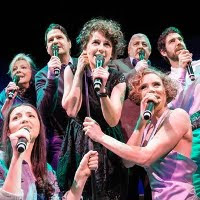 Surely one of the most experimental pieces the Royal Court's staged in a long while, Martin Crimp's In the Republic of Happiness starts with what looks like a familiar Christmas scene, but quickly turns into one of the most baffling festive offerings you're likely to see. The play is divided into three distinct sections, each given a very different look in Miriam Buether's great set design (and for a change at the Jerwood Downstairs, the audience actually gets to watch the super-speedy scene changes take place.) First up is the traditional family discord around the Christmas dinner table. But as the sun goes down it turns out Dad (Stuart McQuarrie) has taken all the light bulbs out of their fittings, and the family secrets prove just as murky as the living room as the afternoon wears on. 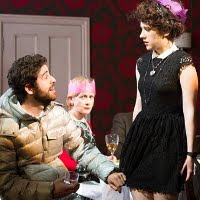 What really tips things over into theatre of the absurd is the surprise arrival, seemingly through a wall, of Mum's brother Bob (Paul Ready,) who is about to leave the country and before he goes has to tell the family what he dislikes so much about them - though he says it's all actually his partner Madeleine's (Michelle Terry) opinions he's passing on. Ready brings out a real creepiness to Uncle Bob long before we find out some of the reasons the rest of the family seem so uncomfortable around him. But Bob and Madeleine's arrival is far from the biggest upheaval as we suddenly move to a TV studio where the cast of eight become a panel discussing their ideas of various freedoms they are entitled to. This central section is the longest and also the hardest work for the audience, as the discussion resembles nothing so much as a word association game, the subjects flashed up on a screen (varying from airport security checks to the characters' right to live forever) receive about ten minutes of repetition of key words and phrases. Some shows' reputations precede them however much you try to stay unspoiled, and for the last week my Twitter feed's been awash with how terrible In the Republic of Happiness is, with reports of many walkouts (but some opposing views, including most of the official critics who've vomited stars upon it.) I only spotted two people walking out, in the difficult middle section. Tonight's audience did at least find a lot to laugh about in the talk show segment, although there was undoubtedly an edge of panic to the laughter (but I still think Fielding's line "I've stopped enjoying food. I've stopped enjoying sex. I've stopped enjoying moderate violence" is brilliantly funny, just don't ask me why; maybe it's in the delivery.) And the delivery is really good, from the whole excellent cast. Why the vast gulf in opinions between audiences and critics? Perhaps the latter are rewarding challenging writing, but the thing about a challenge is that audiences appreciate getting something at the end of it, which I don't think is really the case here.

Pinning down the meaning of Crimp's play is hard, although it certainly deals with many of the middle-class preoccupations and hypocrisies that have been a focus of Dominic Cooke's tenure as Artistic Director (Cooke also directs here.) In the Republic of Happiness has a definite satirical vein that touches on selfishness, entitlement, pop psychology and the inability of some people to find happiness despite having so much in their lives. The final sequence, which I actually found the least engaging but is at least the shortest, sees Bob and Madeleine in wherever they went off to at the end of the first scene, a place where they seem to have "subjects" Bob lectures to - perhaps this is the Republic of the title, and even here Bob can't be happy. 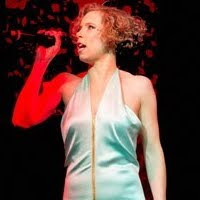 All three scenes of the play are occasionally broken up by the cast breaking into song - actually these are pretty good, probably the best thing about the whole show (although the Court is perhaps being a bit optimistic in trying to flog CDs of Roald van Oosten's songs from the play to the audience on the way out; I suspect they'll do a brisker trade from people needing a stiff drink at the bar.) Crimp's play is an experiment, and in my opinion one that fails - it doesn't work as entertainment, and I doubt many people will have come out of the theatre caring about the play's concerns, because they're too indecipherable in the first place. Ian utterly hated it - perhaps having heard so much vitriol in the last week meant I was expecting far worse, so I even managed to enjoy some of it. And I certainly wouldn't want the strong feeling against this to make people forget that much worse is currently being excreted onto the Upstairs stage of the same theatre. I'm quite glad I saw In the Republic of Happiness if only to join in the debate about it. But I doubt the newspaper critics will be getting a great deal of thanks from the readers they've so enthusiastically pointed in its direction.

In the Republic of Happiness by Martin Crimp is booking until the 19th of January at the Royal Court's Jerwood Theatre Downstairs.