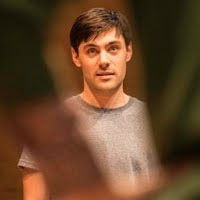 Lightning struck twice with Polly Stenham and Anya Reiss both being discovered while still at school, but the Royal Court's attempts to make it a hat trick with E.V. Crowe haven't, to my eyes, borne fruit. Her schoolgirl debut Kin was underwhelming and I found her latest offering even more problematic: Hero tackles casual homophobia at a primary school by taking us into the flats of two male teachers: Charismatic Danny (Liam Garrigan) lives with his civil partner Joe (Tim Steed,) and they are hoping to adopt. His colleague and neighbour, the much more chaotic Jamie (Daniel Mays) is also an old friend of Joe's, and as such invites himself round a lot more often than Danny would like. At the start of the play his visit is to ask for advice, because the 7-year-olds have started a false rumour that he's gay, and he massively overreacted when he found out.

The chip on Jamie's shoulder is bigger than he is, and soon he's implying that since Danny is actually gay, he should be the one getting the stick. Quite how Danny's sarcastic reply that he should come out to his class turns into a genuine determination to do so is unclear, but with Joe worrying that any controversy could affect their chances of being allowed to adopt, he sticks to his guns. Meanwhile Jamie's discomfort at being thought gay is nothing to what happens when much more aggressive homophobes target him. 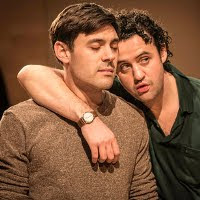 I had all sorts of issues with Hero, not least of all that beyond "homophobia still exists even in apparently liberal areas and takes many forms" I struggled to see what it was about, it took so many tangents. The utter unlikability of the characters is a massive problem too, as is the fact that their relationships don't make much sense. Joe's every move seems motivated by self-loathing homophobia and we have to accept him and Danny as a couple because the script says so, not because they exhibit any kind of compatibility. At least Joe's continuing to put up with the repellent Jamie is explained eventually, although we're told what happened by quite an unreliable source. Jamie himself is a mass of fury, resentment and overreaction, whose selfishness frequently tips over into potentially causing others harm. Is his extreme reaction to everything that happens meant to suggest he's also fighting his own repressed sexuality? Beyond some glib clichés about his fashion sense and musical preferences we don't get much exploration of this.

It's disappointing that the only woman in a play by a female playwright is a cipher - Jamie's wife Lisa (Susannah Wise) does at least seem to realise what an utter cock he is, although why she not only stays with him but is determined to get pregnant by him is another matter. As for the play's only well-adjusted character, the Hero of the title seems to have been taken very literally, with Danny a positively messianic figure, all fluttering eyelashes and soothing wisdom, which eventually grates as much as his nemesis' anger issues. 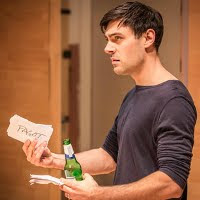 After the interval the furniture on Mike Britton's school gym-inspired traverse set is flipped round to take us to Jamie and Lisa's flat, where we revisit some events from the first act from a different perspective. It's a neat dramatic device but clumsily handled - we don't actually learn anything new from the change of angle. And perhaps the pair's discussion about IVF is crucial, but it seems ridiculous that they'd have it when Jamie's just had the shit kicked out of him, they're waiting for the police to arrive, and they don't know if Danny has been similarly attacked. We also get a very flippant (to the point of completely trivialising a serious issue) resolution to the first act's big cliffhanger courtesy of Danny's Jesusy powers of saving the world with love and understanding. Great chunks of this second act seem to have no relation to each other or the overall framework, an impression not helped by Jeremy Herrin's production taking a different stylistic route than in the first half.

I feel bad about being harsh on a young playwright and there is the odd good moment (Danny's description of how he taught "inclusion" is nicely performed and has a sense of hope in a better future from the children,) while very occasionally one of the attempts at humour lands, but almost everything else about Hero is a shouty, unholy mess.

Hero by E.V. Crowe is booking until the 22nd of December at the Royal Court's Jerwood Theatre Upstairs.