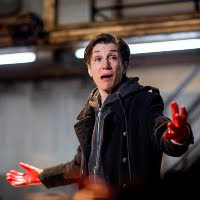 My final Shakespeare trip of a Bard-heavy year takes me back to one of those plays I've never warmed to, Julius Caesar. Back in the summer, Gregory Doran's Africa-set production was probably the best I've seen the play done, so this one at the Donmar Warehouse had a lot to live up to. And Phyllida Lloyd's is another take to go for high-concept casting, this time an all-female version of the story. We still follow the conspiracy of Brutus (Harriet Walter,) Cassius (Jenny Jules) and a select group of Roman senators to assassinate the hugely popular Julius Caesar (Frances Barber) before his increasing political power leads him to tyranny. But we're now in a women's prison, where the inmates have been given permission to stage the play in the recreation room, and some of the cast are taking it all much more seriously than others.

I must admit there was an element of me being disappointed before I even went in: When I heard about the prison setting I thought it was a stroke of genius as the story could quite believably be transplanted there. Caesar as the prison's top dog, turned on by the other inmates, with the battles following the assassination perhaps being done to the backdrop of a prison riot. So it was a disappointment to then hear about the play-within-a-play element, with the women basically playing men and the original story not actually stretched that far. 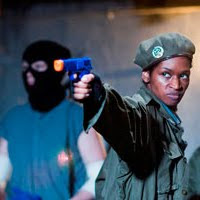 And I never lost the feeling that the production is not quite as radical as it might want to be, with the prison setting and the play-within-a-play fighting each other at times: So the guards have presumably given the prisoners plastic toy guns so they can do the violent scenes without actually getting their hand on anything that could be used as a weapon; but Caesar's death-by-bleach and Portia's (Clare Dunne) using a broken plastic protractor to cut her thigh seem to come out of a more literal idea of inmates using cunning to create real weapons out of nothing. And again perhaps I'm unfairly comparing to the last Caesar I saw but this production didn't feel like it had a strong through-line that wrapped the story up, with several ideas feeling underdeveloped, like Dunne's Octavius Caesar edging Mark Antony (Cush Jumbo) out of power at the end. And while I thought the start of the latter's "Friends, Romans, countrymen" speech was very cleverly done, I found the way it then developed to be a bit overly literal - I think the audience could be trusted to realise that despite his protestations of being a bad public speaker he's actually got them in the palm of his hand, without us seeing him actually conducting their responses. And although Carrie Rock's Soothsayer has been established as being somewhat childlike and insane, I still think her
SEVERE VADGE WARNING!
later on is the sort of thing that would have been called gratuitous had a male director done it. 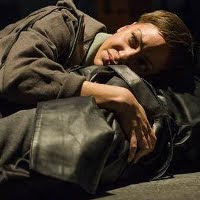 But there's also a lot that's right about Lloyd's production. After the Donmar space got slightly rejigged for Berenice, Bunny Christie brings back the usual configuration but strips back the space to expose its brick walls and levels of scaffolding, adding a couple more (sadly underused) catwalks to those the building already has. And Lloyd has blocked the show well1 - from the side of the circle we rarely had to lean forward. Barber's Caesar has a real suggestion of the menace that Brutus sees in him. The assassination itself is very cleverly staged, although tonight rather wasted on a front row who were not up for any such business - I'd hate to see what would have happened if any proper audience participation had been required. The edited text is run straight through without an interval, which can be punishing on the bladder but really is the best way to approach Julius Caesar as the later scenes can falter without the energy of the earlier ones pushing them on - this is quite a speedy couple of hours in any case.

And if the story isn't completely transposed into its new setting at least there's a nice touch in the way Walter's prisoner can be seen getting more profoundly affected by playing Brutus as the play goes on; I'm sure you could create whole back-stories for the character and how the role she played might have mirrored what got her into prison in the first place. I still think I'm going to mainly remember this for not quite having the courage of its convictions, and I thought the high concept led to some of the actual staging of the play-within-a-play being quite samey and dull, but there are still a lot of positives and the story is told with plenty of pace.

Julius Caesar by William Shakespeare is booking until the 9th of February at the Donmar Warehouse.

1this really should be basic rather than worthy of note, but something about the Donmar seems to make directors completely forget how to block for a thrust, let alone one with quite a lot of blind spots from the circle
Posted by nick730 at 22:30