Theatre review: The Orphan of Zhao 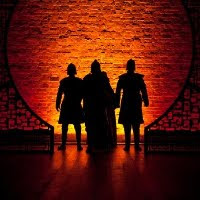 Next up in the "A World Elsewhere" season is the first Chinese play ever to be staged at the RSC, The Orphan of Zhao. Although its provenance is slightly less straightforward than that - the story has been retold on stage in China for centuries, with the best-known version being Ji Junxiang's 14th century telling, with 17th century amendments by Zang Maoxun. What we have here is a new adaptation by James Fenton, taken from a variety of original Chinese sources (and adding a new ending to tidy up a nagging plot hole.) Gregory Doran directs, making this either his final production as Chief Associate, or his first as Artistic Director, or neither, or both. The publicity has been keen to call the play the "Chinese Hamlet" although the main similarity is in this being a bloody revenge tragedy - The Orphan of Zhao is a much more epically sprawling affair, and at times a gripping one.

Serving an immoral, drunken Emperor, his favourite courtier Tu'an Gu (Joe Dixon) has a lot of power, but isn't too keen on sharing it. He determines to get rid of the other three most senior ministers, especially the Emperor's son-in-law Zhao Dun (James Tucker.) When Zhao is framed as a traitor, not only is he killed but all his family are wiped out. But one last descendant remains: Zhao's infant son Cheng Bo, the titular orphan, has not been killed as Tu'an thinks. Instead, a country doctor allowed his own son to be murdered in his place, and Tu'an has unknowingly adopted the child destined to grow up and kill him. 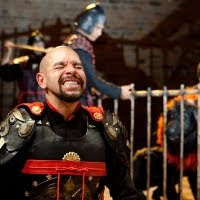 Designer Niki Turner has brought a beautifully lush look to the production (she'd better have - the programme notes inform us that she and Doran got sent on a jolly around China for inspiration) and although the story's structure means it's heavy on the setup, it's pretty absorbing stuff, and I was a bit surprised to find we were already an hour and 20 minutes in at the interval.

Dixon obviously relishes the ruthless bad-guy role, and a scene of him and the Emperor (Stephen Ventura) demonstrating their contempt for his subjects by using peasants (/the audience) as target practice is nicely done. Also clearly a hit with the audience was the Demon Mastiff, a red-eyed puppet of Tu'an Gu's murderous pet, brought to life War Horse-style by the actors. Graham Turner has one of the trickiest jobs as Cheng Ying, the doctor who in many ways forms the warm heart of the play, but has to balance this with his character sacrificing his own son so that the last of the Zhang line can live. And it's interesting how effective the scenes featuring the endangered baby are made by having the doll used on stage complemented by Chris Lew Kum Hoi (who also plays an important part in Fenton's new coda) kneeling to the side of the Moses basket making gurgling noises. 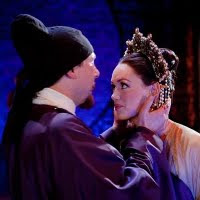 The jump forward a couple of decades to the now-adult Cheng Bo (Jake Fairbrother) does make for a slow start to the second act as he still has no idea of his own true identity, so the audience are quite far ahead of him. But his reunion with the mother who thinks he's dead (Lucy Briggs-Owen, otherworldly as the now-insane Princess) gets us back on track. And the play's trump card is in the dynamic of the big confrontation: Cheng Bo now knows the truth about the monster Tu'an Gu really is and why he has to take revenge on him; but he remains the adoptive father who helped raise him (and ironically taught him the martial skills he can now use against him) and who until recently he unreservedly loved. It's a dynamic I don't feel like I've seen before, and Dixon and Fairbrother handle its contradictions very well.

One thing I wasn't sold on was the occasional interjections of song, either by Jeremy Avis' Balladeer or another of the characters. Paul Englishby's incidental music is great but the songs are less successful, and the way Fenton's incorporated them feels like a cursory nod to the style of the original Chinese plays rather than an essential part of the narrative. I don't know enough about the originals though, to say if the songs do indeed sit a bit awkwardly with the rest of the storytelling, and all Fenton's done has been to emulate that. 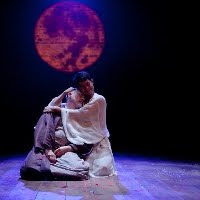 But with lots of nice little visual touches (red petals cascade to the ground whenever a character dies; and was that rice falling to the ground to represent a rain shower?) this is an interesting production of a play that clearly deserved a revival.

The Orphan of Zhao by James Fenton is booking in repertory until the 28th of March at the Swan Theatre, Stratford-upon-Avon.