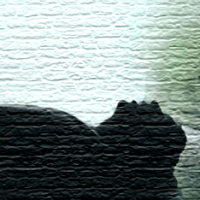 For the third year running ambitious fringe company The Faction return to the New Diorama to perform a three-play repertory season. Shakespeare is back on the menu this time around, indeed they've gone for the biggie: Hamlet is an interesting one for a company so heavily invested in ensemble playing to tackle, as it's weighted so much in the lead's favour. Although I didn't know when I booked which member of the company would take the title role, I correctly guessed that director Mark Leipacher would give it to Jonny McPherson, one of the stronger actors among the regulars, and the one with leading-man good looks. Though the performance space is small as is the cast, Leipacher has gone for a pretty epic sweep in a production that hasn't taken scissors to the text too liberally, and so despite maintaining a speedy pace it comes in at over three hours - but for the most part it uses the time well.

Prince Hamlet, having returned from university for the funeral of his father, finds that his uncle Claudius has briskly taken his father's throne as well as his wife, and now demands that Hamlet stay at court. Here, thanks to a cameo appearance from a famous face, he learns that the old king's death was no accident. The prince vows revenge on his murderous uncle, but the bloodbath of his vengeance has to wait as he discovers himself. 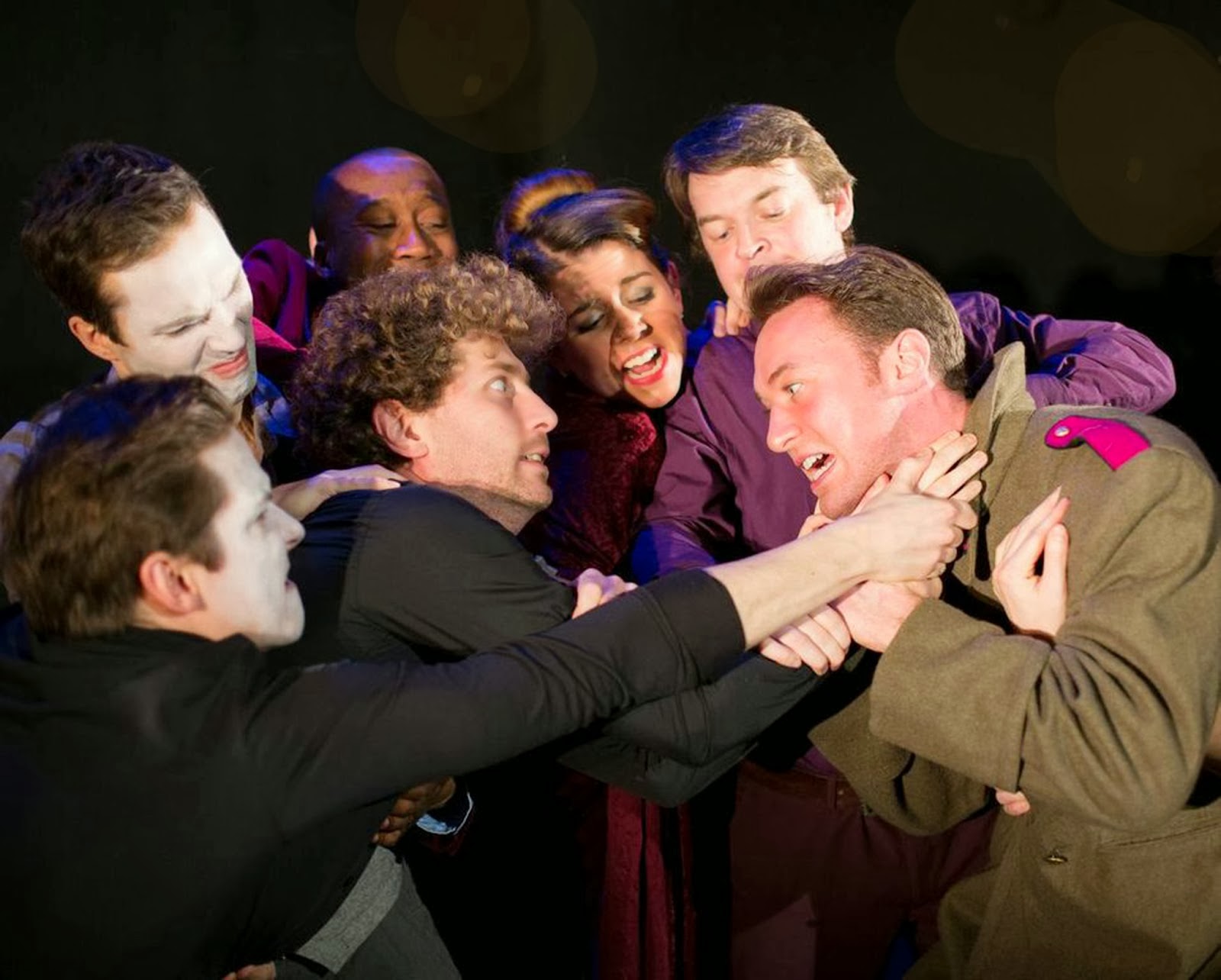 Like Twelfth Night, Hamlet sometimes challenges my self-imposed rule about giving a plot summary even for plays I've reviewed a dozen times before, but The Faction's take makes it easy to put a new spin on things as it does indeed become the story of a prince becoming a man (even if he has to die in the process.) Many actors have made audiences really love Hamlet but there's no question the character displays some pretty dickish qualities, and this is McPherson's starting point: A superior, condescending hipster, his black cardigans prissily done up, even his mourning garb is more affectation than genuine grief. His early pronouncements of his uncle's guilt are shallow jibes, so when his father's ghost appears and actually confirms it's true, it gives Hamlet a new purpose and a spur to develop over the course of the play - although as the scene of baiting Osric (Christopher Hughes) proves, the dickishness never quite goes away. 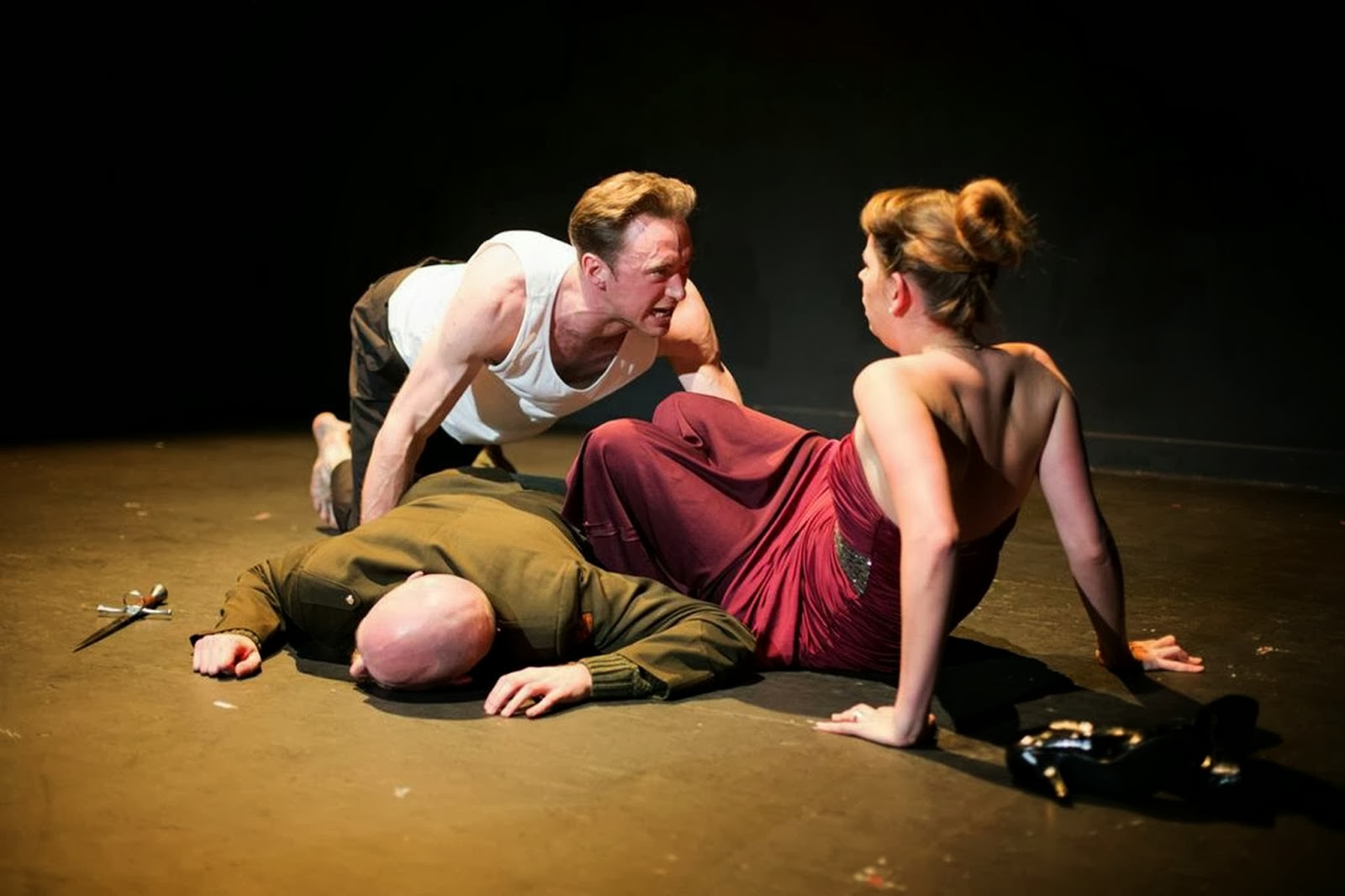 Damian Lynch's Claudius is very much a David Cameron politician in jeans and blinding smile, the mask of earnestness not slipping one jot until he's caught out by The Mousetrap and starts to crack. The Faction's ongoing issue of all the cast being roughly the same age leads to a Gertrude that looks, if anything, younger than her son, but Kate Sawyer manages regardless to join the ranks of Gertrudes with one incredibly memorable little piece of interpretation1, as we see the precise moment when she consciously decides to lie on Hamlet's behalf to Claudius - and as a consequence begins to see her new husband in exactly the light her son painted him in. And some ideas that shouldn't work really do - playing Cary Crankson's Laertes as a bit dull-witted and possibly stoned made me wonder how the hell his lecture on keeping her purity to Ophelia would work, but in fact it pans out as a gloriously awkward moment as he digs himself into increasingly explicit descriptions and mimes. It later makes him particularly vulnerable to becoming Claudius' pawn. I liked the little reference for people familiar with the play, in having Derval Mellett's Ophelia wear a flowery dress from the start, and it's one with a nice payoff in the mad scene. 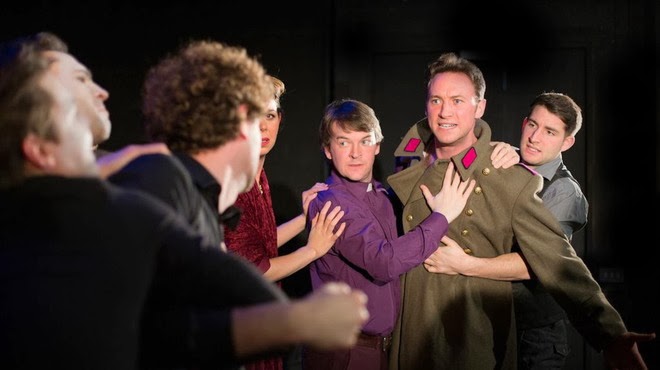 Where The Faction have never been the strongest company is in creating a strong overall conceit for their productions, and the modern-dress costumes and electronic surveillance equipment sit awkwardly with the big swords the cast go around brandishing. Dressing Horatio as a priest suggests we'll get a particular exploration of the play's religious element, but there's nothing in Lachlan McCall's performance to back up the dog collar, and apart from some characters ostentatiously crossing themselves near the end the religious aspect is untouched. And the trademark ensemble physical work does end up sitting awkwardly with the very focused look at one character. The production's big coup, of getting a pre-recorded Simon Russell Beale to play the Ghost, is very nicely staged, the chorus-like cast holding up red cushions to project his image onto (and McPherson incorporates some of the jerkiness of the projection into his performance of Hamlet's tendency to repeat himself.) But having the cast clomp noisily on and off the stage in this and other lyrical movement sequences rather spoils the effect.

When a production, even of Hamlet, goes over the three-hour mark I feel it really needs some fireworks to justify it, and Leipacher could have been a bit more ruthless with cuts to streamline things a bit. But this is one of the more satisfying takes on the play you're likely to see with such a small cast at its disposal, a handicap that usually means a lot of subtlety has to be sacrificed, but not here.

Hamlet by William Shakespeare is booking in repertory until the 22nd of February at the New Diorama Theatre; and on the 26th & 28th of February at Greenwich Theatre.

1the others being Penny Downie realising the wine is poisoned and drinking it anyway, and Clare Higgins seeing the Ghost but pretending not to
Posted by nick730 at 23:48