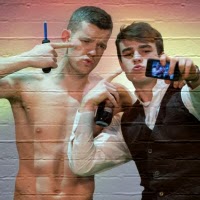 Much as I'd like to approach every show I ever see as a blank slate, some inevitably have more levels of anticipation built up around them than others. The latest stage appearance from Big Favourite Round These Parts Russell Tovey is always bound to be a bit of an event. The news that he'd be playing a gay footballer didn't make it any less exciting. The publicity photos confirming the rumours that he spends most of the play wandering around in his underwear... well, you've read this unholy excuse for a blog, you know where this is going. The good news is that The Pass will disappoint only the most demanding of theatrical perverts. The better news is that John Donnelly's play is a bit of a triumph, equal parts funny and disturbing, which would be memorable even if the cast didn't spend most of it in a state of undress. Although just in case it wasn't clear: The fact that the cast spend most of it in a state of undress is a good thing.

Over the course of three late nights in three different hotel rooms, The Pass charts the entire career of superstar footballer Jason (Tovey.) We first meet him and his teammate Ade (Gary Carr) as 17-year-olds on a European tour. Having been training for the team since childhood, this could be the last chance to impress the coaches and maybe make the first team - and they know it's likely only one of them will get to stay on. 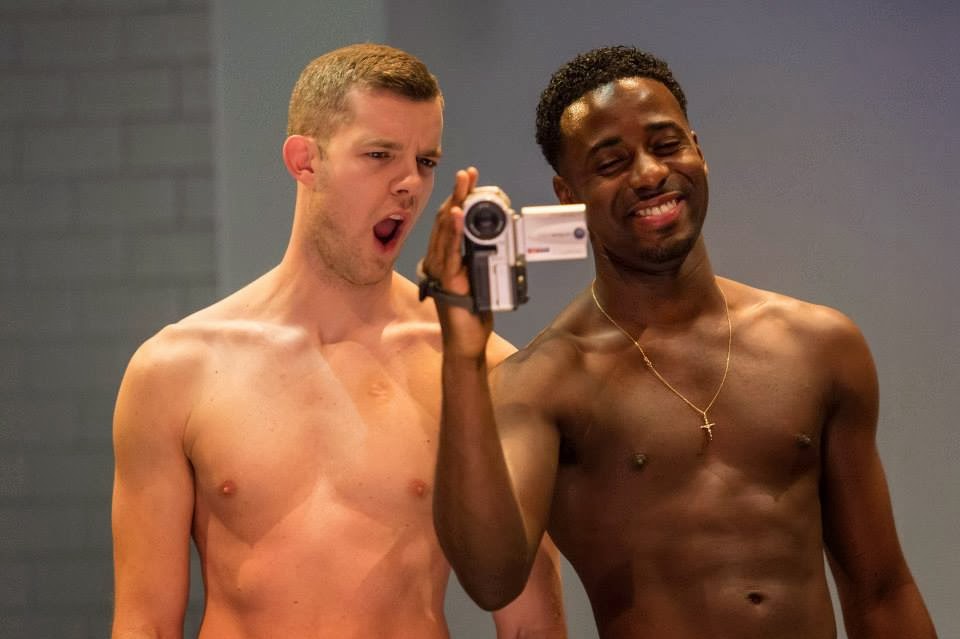 As they mess around when they should be resting for the next day's match, we get a sense of their long-standing friendship and also the competitiveness underneath it; but also of the attraction to each other they exaggerate to try and pretend it's a joke. 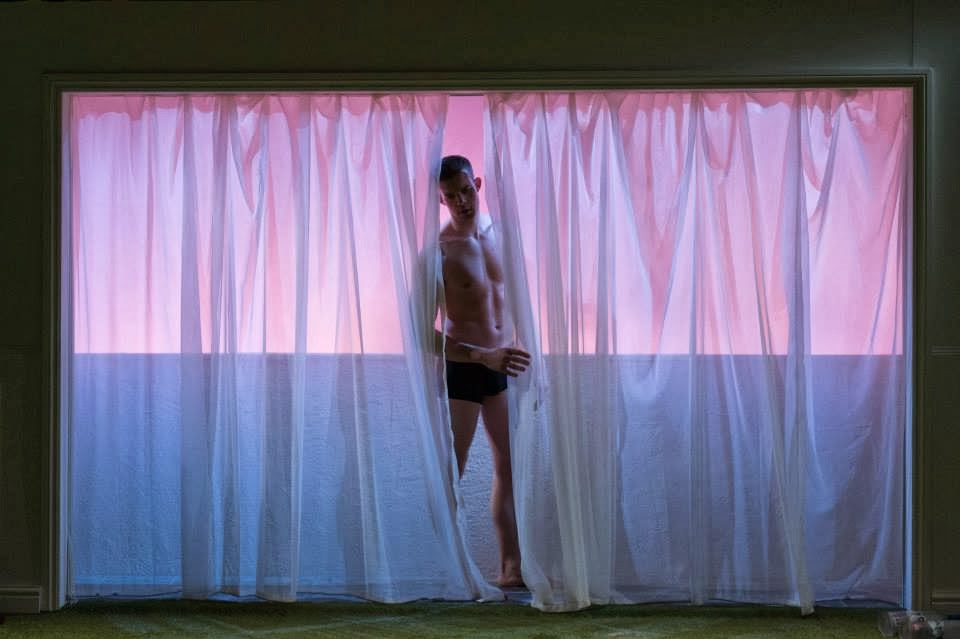 By the second act it's Jason who's won out, and we see him at the height of his fame. He's married, but when recovering from an injury in Spain he brings table-dancer Lyndsey (Lisa McGrillis) back to his room. The final act sees him at the end of his career, more or less living in a Manchester hotel room after his divorce. He invites Ade, now a plumber with a boyfriend, round to visit to deal with some unfinished business. 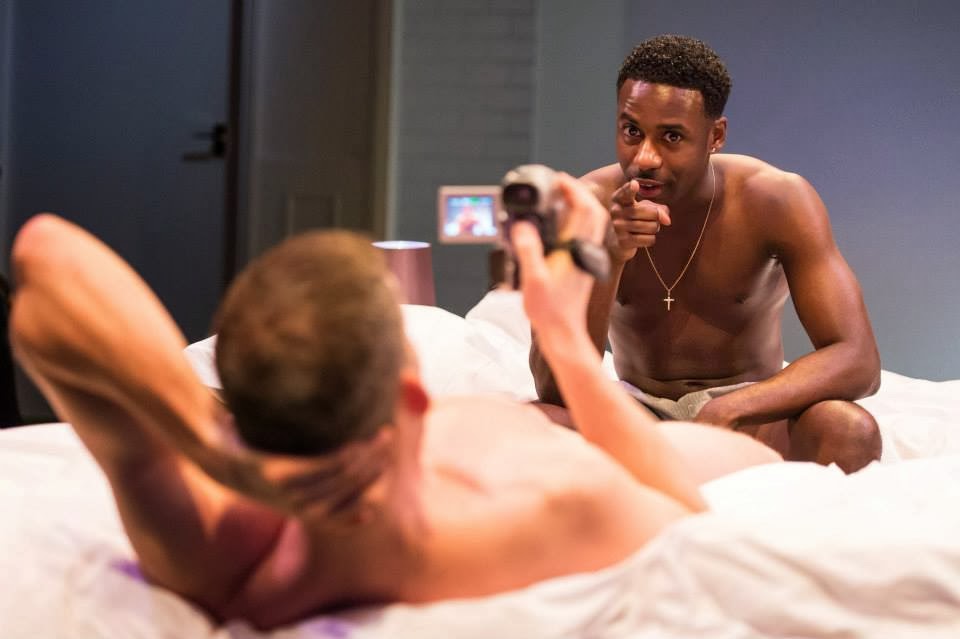 Donnelly's script is very funny, especially in the first two acts, and Tovey has great sparring partners in Carr and especially the stellar McGrillis, brilliant at taking down the arrogant footballer who thinks he can throw her off-balance by being more educated than she expects, only to find she's his match in many ways. (I also loved McGrillis pretending that her character was stroking the back of Jason's neck, so she could get rid of the bit of shaving foam that had been left there from the previous scene.) 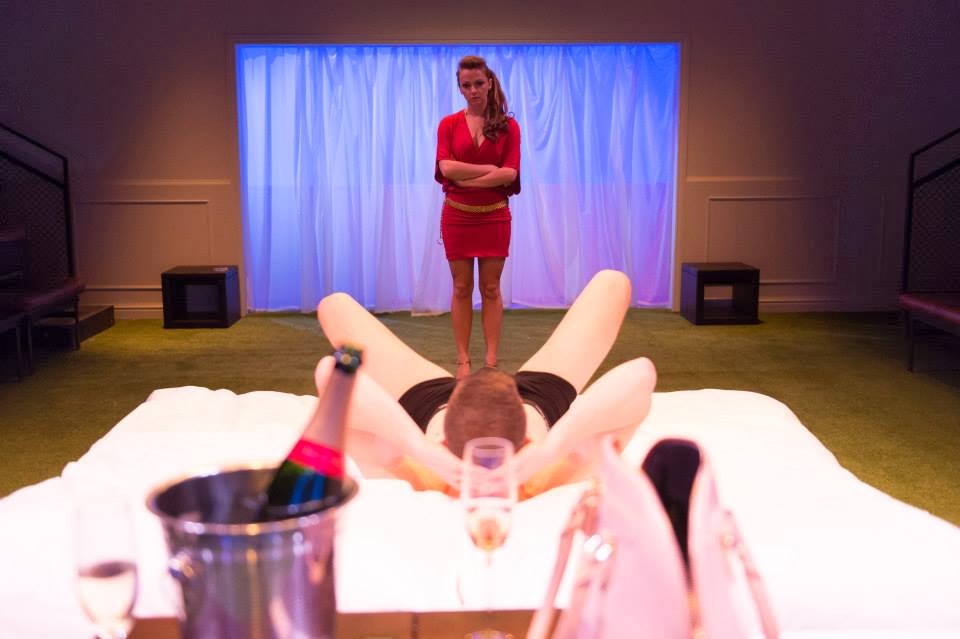 This central act is perhaps the strongest also because of the perverseness of the twist the story takes, the most striking example of the play's examination of how football remains in an almost parallel universe from the rest of the modern world as far as attitudes towards homosexuality go - and the levels not just of action that Jason will take to throw people off the scent, but also of denial he'll use to get through his life and keep his career on track. 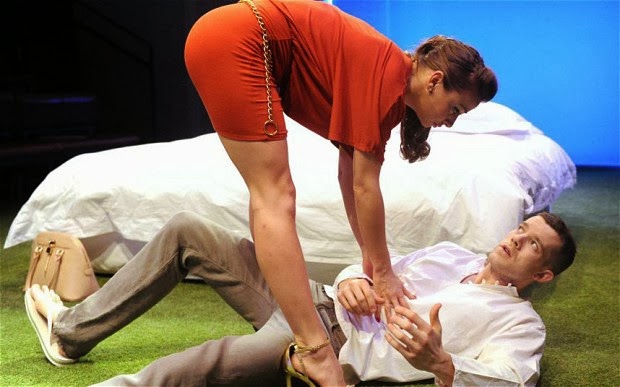 What? No, this is totally the usual amount of photos I use to illustrate a review, shush. Look, this is a play that opens with Russell Tovey in his underwear, skipping rope; pecs bouncing up and down, other generously proportioned areas bouncing up and down as well. It's a play for which quite a lot of publicity photos featuring said generously proportioned areas have been released. I'm just saying I'm not the monster here, this is a very good play but that's not the reason it's sold out to within an inch of its life. 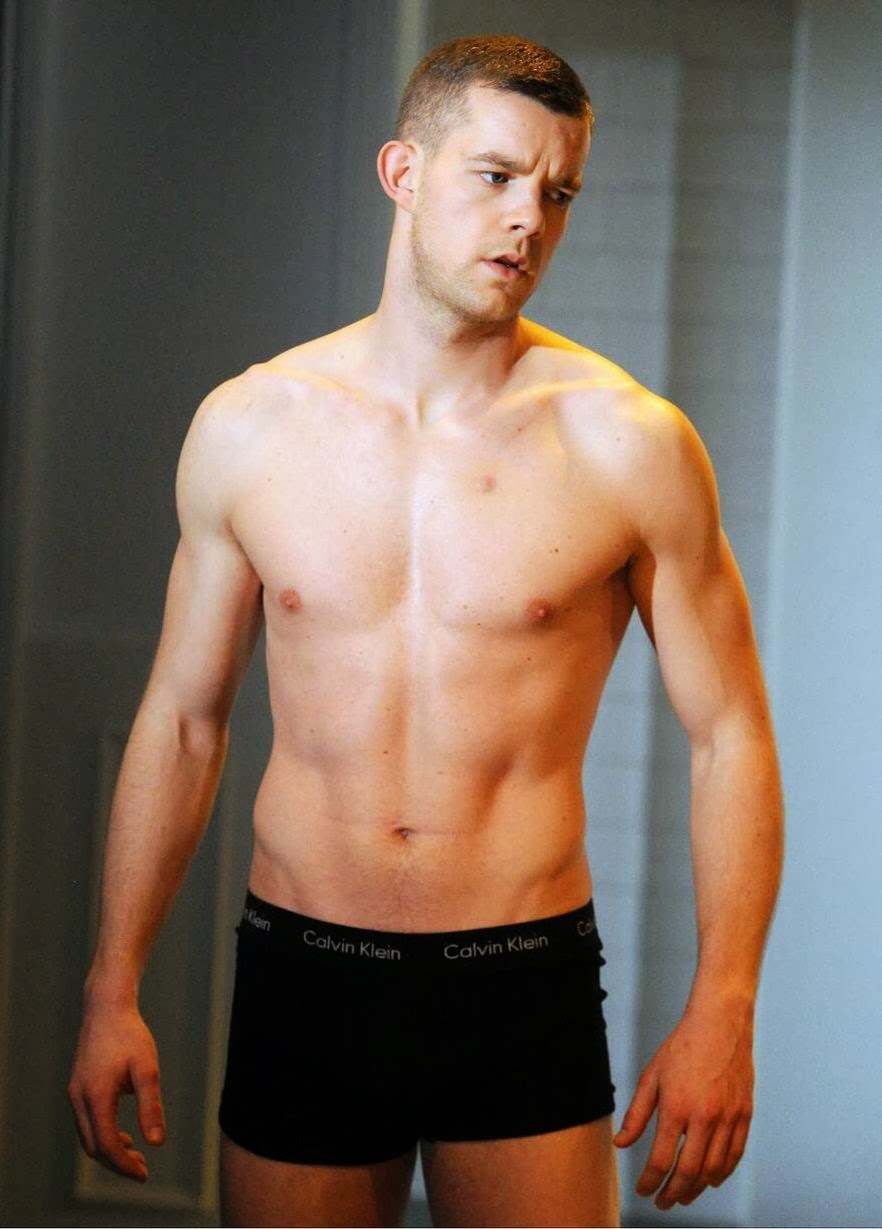 Although the humour remains in the final act, we see a much darker side to the play as the full extent of Jason's corruption becomes apparent. On painkillers for his failing knees, he uses them recreationally as well, and as his mood fluctuates wildly his reunion with Ade becomes alternately about trying to reconnect to his past, and about point-scoring over how much better his life's turned out. I don't call someone a Big Favourite Round These Parts on looks alone you know, there's a talent round in there as well, and Tovey more than justifies the title with a blistering performance of charm tempered with a real edge of danger. 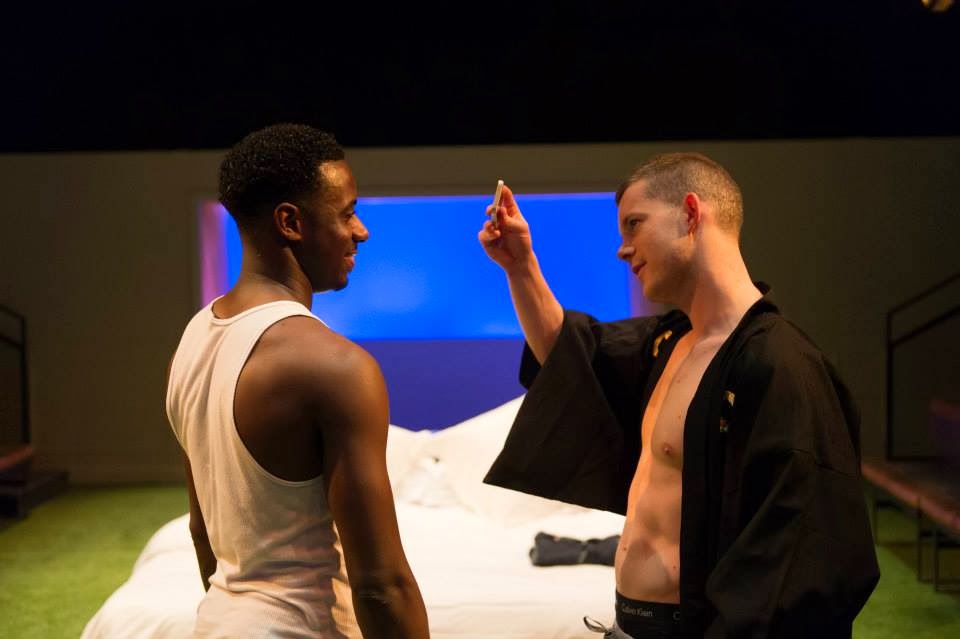 The potential for things to turn to tragedy really comes when Jason ropes young bellboy Harry into their games, a lovely little performance from Barry Nico Mirallegro, who has great chemistry with Tovey. Here is a photograph of Russell Tovey splashing all over Nico Mirallegro's face. 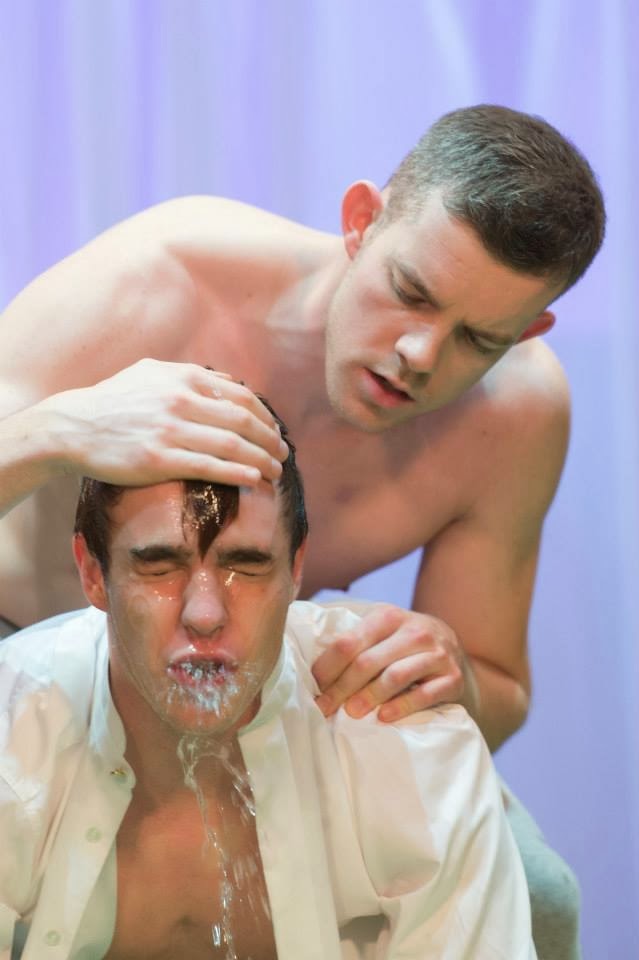 Donnelly also shows a real skill for going near the knuckle, judged perfectly in John Tiffany's production - I'm thinking of how close to the bone he plays the moment where it seems like Jason and Ade's banter has tipped over into racism. And although many a show has made a cheap Jimmy Saville joke, it's chilling to bring him up here just before Tovey starts unbuttoning Mirallegro's shirt. And the last part of that sentence has definitely appeared on the internet before in a different context. 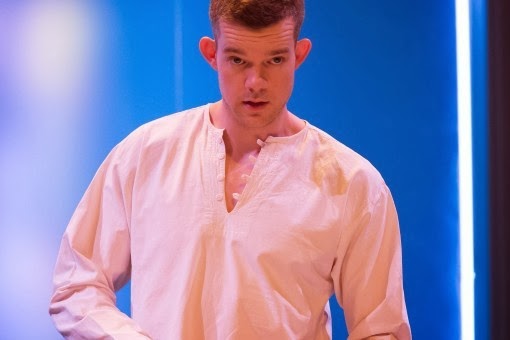 Tiffany also brings some of his trademark, dance-like movement theatre to the scene changes, the Jacksons' "Can You Feel It?" providing a recurring theme on the soundtrack and gaining an increasingly sinister association as the play goes on. The best work so far from the Royal Court's new regime, this is funny, intelligent and intense, and worth much more than a mere list of how much male flesh is on show. 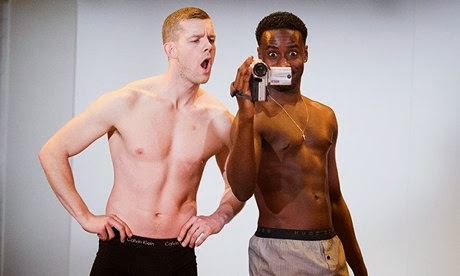 But, for the record: Tovey is in his pants for most of the first and third acts, Carr likewise for the first. Mirallegro has his shirt unbuttoned for most of his time onstage and his trousers round his ankles for a while. Tovey and Carr both have rear nude scenes from behind the frosted glass of the shower area. Tovey almost goes full-frontal but keeps his hand over the more relevant areas; it's enough to see he manscapes more than I would like, but that had already been established from him holding a similar pose in Being Human so I've got over it. Andy says he spotted a bollock up Carr's boxer leg, but I can't attest to that. I'm an award-winning writer me, apparently. I bet those people who voted for me are feeling so proud right now.

The Pass by John Donnelly is booking until the 1st of March at the Royal Court's Jerwood Theatre Upstairs (returns and day seats only.)

Note: People in the front row may get wet. They may also get water splashed on them.
Posted by nick730 at 22:54