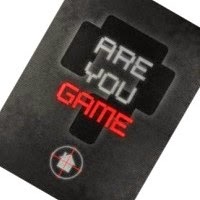 Ever since Cock, Mike Bartlett has been writing plays based around a very specific set design, often putting his central characters under vicious attack. After that first cockfight, and the recent bullfight, he now puts a young couple in the middle of a real-life shoot-'em-up video game. The first of a number of plays coming up that look at the spiralling cost of housing, Game sees Ashley (Mike Noble) and Carly (Jodie McNee) move into a luxury two-storey apartment for free. Of course, there's a catch: Like the Big Brother house, Ashley and Carly's new home is under 24-hour camera surveillance, and every wall is a two-way mirror behind which visitors can watch them. But simply watching isn't the main attraction - paying customers are there to play a kind of human safari. At any time of day, an unseen stranger might shoot one of them with a tranquilliser dart. And this isn't a TV set but the home where the couple plan to live and raise a family for several years.

Miriam Buether, who designed Bartlett's Cock for him, returns to gut the Almeida's usual seating and put the audience behind the glass walls of the apartment in dark, camouflaged game zones on all four sides. Shutters rise up on the windows when the house is in play, and at other times what's going on is displayed on video screens. Every so often David (Kevin Harvey,) an ex-soldier charged with their security, leads a group of customers into one of the zones, from where they'll try to shoot their victims. 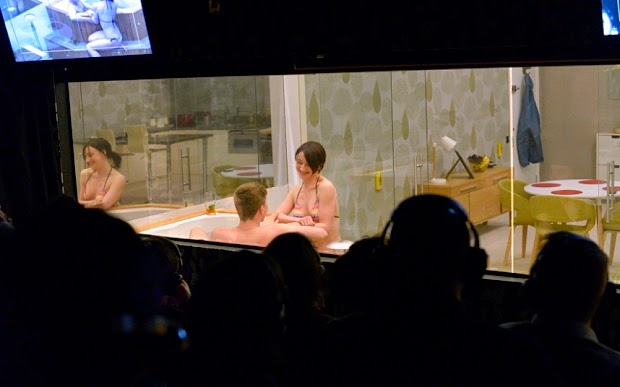 These are probably the satire's strongest scenes; Bartlett has a particular knack for heightening casual, everyday cruelty. Whether it's a hen party cackling at Ashley and Carly's attempts to have a baby, a middle-class schoolteacher taking out her dislike of the poor on them, or a middle-aged couple barely acknowledging their existence as they shoot them and bicker with each other, these are the most uncomfortable moments. 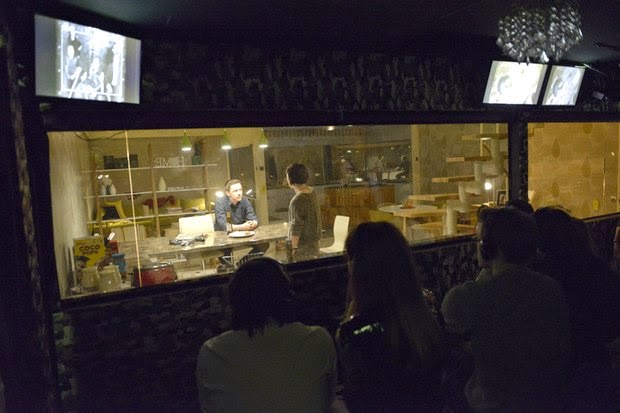 The story's development is less satisfying though; it's a problem the play acknowledges, as the game's initial popularity wanes over the years, and the shadowy company behind it has to drop prices and introduce increasingly cruel twists to keep business going. Noble and McNee give strong performances as the couple trying to live a perfectly banal existence in the middle of a surreal nightmare, but their ordinariness doesn't give them much to work with. In a way Game is both too long and too short - too long to sustain its premise for an hour, too short to create characters we feel we know; David, the warden made to sit through years of watching them hunted, feels a bit too much like a stock character as well, the outsider traumatised by being unable to help. But the evening remains watchable, largely thanks to Buether's convincing immersive design, and committed performances from Sacha Wares' cast in a taut production. It's just a shame that the killer premise hasn't quite stretched out to an hour's story.

Game by Mike Bartlett is booking until the 4th of April at the Almeida Theatre.