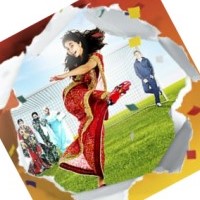 With screen-to-stage adaptations the most common form of new musical, it's not always the most obvious candidates that work best. But while a story about women's football and clashing generations doesn't seem like an obvious candidate, in fact the different cultures coming together in Bend It Like Beckham make for an interesting mix of musical styles. Gurinder Chadha adapts (with Paul Mayeda Berges) and directs her own film, with songs by Howard Goodall and Charles Hart. Jess (Natalie Dew) is a teenage tomboy who enjoys playing football in the park, where her talent is spotted by Jules (Lauren Samuels,) who asks her to try out for the local women's team. The two girls become friends and teammates, although the fact that they're both interested in their coach Joe (Jamie Campbell Bower) could put a wedge between them. But just as Jess discovers that football doesn't have to be a dead end for her, her family decide otherwise.

With her older sister Pinky (Preeya Kalidas) about to get married, Jess' parents are hoping she'll start looking at a traditional Indian future as well. Her father (Tony Jayawardena) in particular doesn't want her to get her hopes up too high, worried her race will prove an obstacle like it did for him. 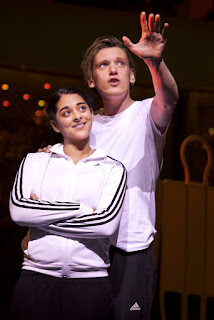 So Bend It Like Beckham follows Jess as she spends her time sneaking around behind her parents' back - a few too many times really, at nearly three hours the show is too long and has a couple of dull patches, especially at the top of the second act. But there's lots of good setpieces, and if Goodall's songs aren't always instantly memorable they're fun. Ironically for a show where most of the leading roles are female, it's Joe who gets the most memorable solo, although the title song is also a fun number for Jess and her best friend Tony (Jamal Andréas.) 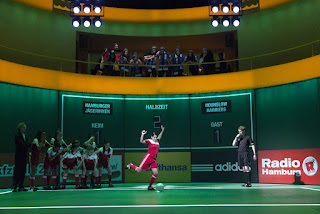 The choreography's a bit of a mixed bag, with the opening few numbers feeling a bit wooden; and the various ways balls are shown getting kicked about the stage (with actual balls on wires or projections around the auditorium) are pretty naff. As is generally true of the show though, it's the musical numbers that mix traditional musical theatre style with Indian influences that are the most successful. 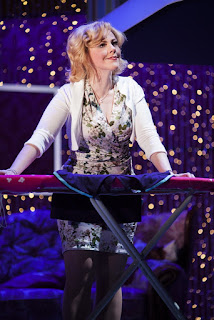 I would have liked to have seen more of Sophie-Louise Dann as Jules' mother, but she's inevitably a scene-stealer when she does appear, and got the second-biggest curtain call cheer after Dew. Miriam Buether's design makes effective use of a simple row of revolving walls to take the stadium-like set from Southall market to a German football pitch and an airport departure lounge. But as is only right for a story largely built around an Indian wedding, the design's real stars are often Katrina Lindsay's costumes. (We do seem to be moving more towards the Broadway tradition of having separate set and costume designers, don't we?) 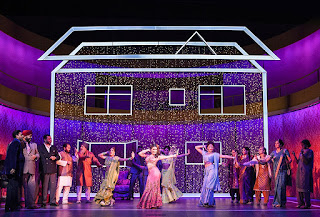 Although at times Bend It Like Beckham outstays its welcome it's full of energy, and a cast who look like they're genuinely having fun, which is always a good sign. Judging by the higher percentage of South Asians in attendance than at most shows - the show's in-jokes about Indian culture got a lot of big laughs - it's also attracting that new audience theatres are always talking about, so maybe it'll stick around for a while; it deserves to.

Bend It Like Beckham by Howard Goodall, Charles Hart, Paul Mayeda Berges and Gurinder Chadha is booking until the 24th of October at the Phoenix Theatre.