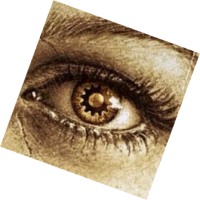 Even with huge commercial musicals there's not always a guarantee you'll get a cast recording, so the odds are stacked against one turning up for a fringe show, no matter how ambitious. This unlikelihood is one that I was already feeling sad about within a few songs of The Clockmaker's Daughter, as among the many things right with Michael Webborn and Daniel Finn's new musical are songs I'd happily stick on my iPod. Set in the fictional Irish town of Spindlewood, it's an original story but with echoes of everything from traditional fairytales to more modern ones like Edward Scissorhands, as clockmaker Abraham (Lawrence Carmichael) mourns the death of his wife and decides to deal with the grief by building a replacement: Constance (Jennifer Harding) is a clockwork girl who magically comes to life, but although she does love her creator, as the title suggests it's as a father figure, not a lover. Frustrated, he forbids her from ever leaving the house.

Of course the moment his back is turned she escapes, making an impression on the townspeople when she accidentally ruins Amelia's (Alyssa Martyn) wedding dress, and makes up for it by knocking up a far superior one for her in a matter of hours. She also catches the eye of Will (Alan McHale,) son of the town's existing dressmaker (Jo Wickham.) 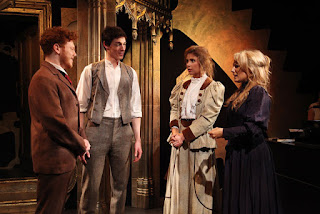 Webborn also serves as musical director, a job he's done for a number of shows at the Landor so he knows how things work there; as a result the orchestrations are perfectly suited to the space, the four-strong band sounding like a lot more, and the common problem of sound balance doesn't exist here - neither musicians nor singers are miked, and the lyrics come across perfectly clear. Similarly, Robert McWhir has directed so many classic musicals in the small space over the years, that he makes this feel like an established favourite as well. The clichés about musical theatre always say it's all about rewriting, but in this case all the rewriting must have been done long before it made it to the stage because unlike most fringe premieres The Clockmaker's Daughter feels impressively finished and slick. 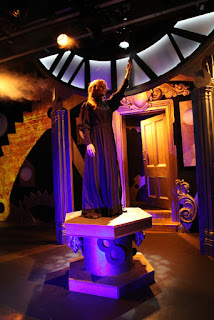 Although a British show the musical style is most reminiscent of modern Broadway musicals like Wicked - a comparison that's also inevitable with the fairytale theme. In fact you wouldn't be too far off in calling this a very British answer to Wicked, although for my money this actually has a higher rate of foot-tapping numbers that stick in the head from the first listen. What it doesn't have in budget it can offer in intimacy, and as usual the Landor doesn't skimp on the set - David Shields' design of clocks and cogs also features a pair of bookcases in Abraham's workshop that get turned into quite a variety of different locations around the town. 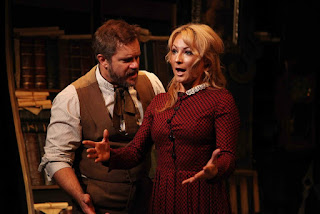 Apart from the very occasional moment when the ambitious songs defeat their voices, the cast are also excellent: Harding has nailed the combination of awkward robotic movement with real emotion underneath it that she's given Constance, and shows a strong voice in the show's big belter "A Story of My Own." But there's lots of enthusiasm and energy on show from everyone, and the moments where the whole cast of 20 join in with the chorus are hair-raising in the intimate space. Sweet without being cheesy, almost frighteningly slick without losing any heart, the opening number "Turning of the Key" wasn't over before I knew I was going to love this show, and it didn't disappoint.

The Clockmaker's Daughter by Michael Webborn and Daniel Finn is booking until the 4th of July at the Landor Theatre.