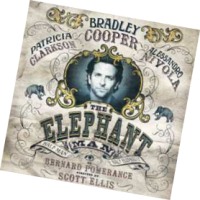 A Broadway transfer that, unusually, comes to the West End with its entire original cast, The Elephant Man has of course had a lot of attention because if features that bloke who played Dr Chilton in The Silence of the Lambs, giving it his best Dick Van Dyke. But it turns out it also has Bradley Cooper from off of Alias in the title role of Joseph "John" Merrick, whose numerous physical deformities made him the star of a freak show. Once he's served his purpose there and is left to die, he's "rescued" by Dr Frederick Treves (Alessandro Nivola) who finds a home for him in his hospital, hoping to be able to study him and discover exactly what combination of illnesses caused Merrick's condition. This also, though, brings out the ordinary human in the carnival freak, and eventually Merrick becomes the fashionable star of Victorian high society.

Fortunately Cooper didn't get nominated for any awards today so he actually turned up to tonight's performance, which is handy as my sister would have been very disappointed if he hadn't. As the script apparently demands, he plays Merrick without prosthetics, contorting his body to suggest the various deformities. 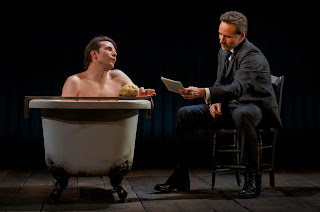 It's a physically impressive performance but one that draws too much attention to its own cleverness - not least of all because it starts with Cooper standing straight, then gradually putting on each deformity as Treves describes it. It's the kind of award-bait performance that's there to be admired, but doesn't engage. Treves' story possibly provides an alternative focus but even from the front row of the Upper Circle Nivola wasn't always audible, so his efforts didn't yield the results they might have been aiming for. 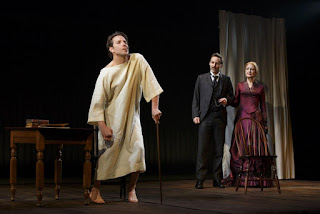 It doesn't help that Bernard Pomerance's play feels dated and quite simply not very good: Lords and princes may be flocking to Merrick because the man previously thought demonic and monstrous has been revealed to have depths of religion and thoughts on literature (to be fair he's right about Romeo and Juliet's love not being real) but it's still only a different kind of freak show to the one he started out in. It's rather a basic point to spend two hours making and even Penny, who was thrilled just to see Cooper on stage, admitted to being bored by the second act. 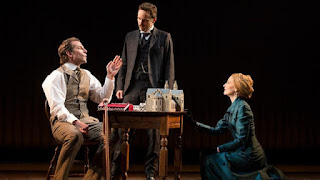 There's also an unpleasant feeling that the play itself is a third level of freak show, the audience watching a much lusted-after Hollywood star contort himself into an ugly figure. At least in Treves' freak show Merrick himself got some benefit out of it, rather than the list of 20+ producers who are the real winners here. But there's a saving grace in Patricia Clarkson as Mrs Kendal, an actress who befriends Merrick. Whether it's in her brilliantly funny arrogance or in her deeply-felt emotional connection to the Elephant Man, Clarkson's appearances lift Scott Ellis' otherwise oddly flat, emotionally distant production.

The Elephant Man by Bernard Pomerance is booking until the 8th of August at the Theatre Royal Haymarket.