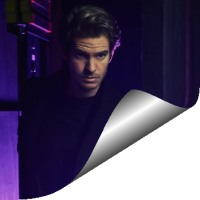 For the second year in a row London's hottest theatre ticket, with reviews to match the level of anticipation, is an epic play in two parts with a supernatural element. But far from the obvious appeal of Harry Potter, this year it's a 25-year-old American play about the AIDS crisis in the 1980s that was the instant sell-out. Tony Kushner's Angels in America comes in at well over seven hours, the first three acts of which are haunted by a sense of dread at something apocalyptic on the way - hence its subtitle, Millennium Approaches. Prior Walter (Andrew Garfield) is a flaboyant gay man who's just found out he's got the virus. His boyfriend of a few years, Louis Ironson (James McArdle,) is still deeply in love with him but very quickly realises a fact he hates himself for: He can't handle staying with Prior to watch him get sick and die.

In his central quintet Kushner includes a real-life character: Nathan Lane plays Roy M Cohn, a controversial right-wing lawyer and confidante of Ronald Reagan, who was also a closeted homosexual and ended up dying of AIDS. 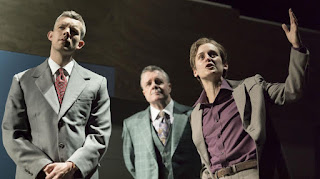 The play is set in 1985, as Kohn receives his diagnosis but aggressively fights against it, and the implication of how he contracted it, becoming public knowledge. His protégé is Joe Pitt (Russell Tovey,) a Mormon who's also in the closet, even to himself - to the point of having a wife, the Valium-addicted Harper (Denise Gough.) As the lies behind their marriage become harder to ignore her mental state deteriorates, and Harper and Prior, who've never met or even heard of each other in real life, start to meet in their hallucinations. 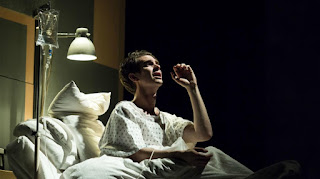 These five characters meet and find various connections over the course of the first play, in an intense and atmospheric production from Marianne Elliott, her swan-song at the NT before she launches her own company. The Lyttelton stage is huge, and in designer Ian MacNeil's set she finds a way to mirror the way the play is both epic and intimate: Three donwstage revolves move us around New York to follow the characters' various stories, while a jagged metal structure hangs over everything, and eventually the whole size of the stage can be revealed as the magic realism kicks in and we're freed up into their imaginations and, perhaps, an actual supernatural revelation. 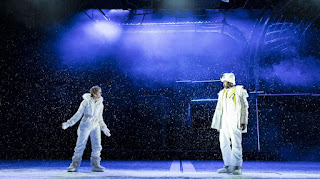 There's big names and award-winners in this cast but what made them exciting wasn't just star wattage - although Garfield's return to the stage after a long absence can't have hurt with those ticket sales. It was that this is real luxury casting in terms of talent, any one of the central five can hold a stage like this in their own right. Garfield has the eye-catching role both as the bitchiest queen and in his character's physical and mental deterioration, and is a natural at holding the stage. McArdle is playing against type, less of the twinkle-eyed charmer and more of the self-destructive guilt. 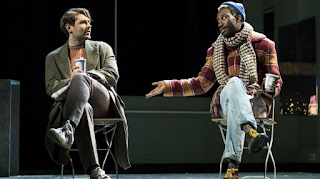 I've always rated Tovey as being more than a pretty face (yes and other parts but shush that's not the point I'm making now) and actually being a really strong actor, and he proves that here with the most self-loathing and repressed of all the characters, raised to believe himself a standard of impossible goodness and raging at his failure to match it. He even manages to overcome what has always been a weakness of his as an actor, and sustains a decent American accent (Charmian Hoare herself in on vocal duties, along with Hazel Holder and Jeannette Nelson.) It's great to see him paired with Gough who gives a performance of real vulnerability undercut with relentless determination. 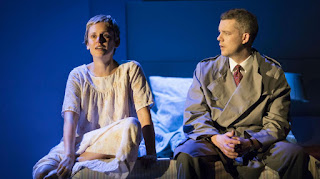 Lane meanwhile gets to chew the scenery as the monstrous, but somehow sympathetic in his own self-destructiveness, Cohn. As well as various non-speaking roles, there's a recurring supporting cast of three: Nathan Stewart-Jarrett is ex-drag queen Belize, the link between Prior and Louis once the latter can't handle it any more; Susan Brown is Joe's mother as well as various roles in male drag; and Amanda Lawrence's roles include, eventually and leaving a cliffhanger for the second part, The Angel. 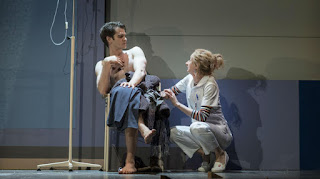 But all the cast are required to double up in ways that seem thematically significant: Gough also plays male as Martin Heller, who has a job offer that would take Joe away from Harper, while in turn Tovey becomes the impossible Eskimo who signifies Harper seizing control over her own hallucinations. Tovey and Lane plays ancestors of Prior's in a couple of the many scenes that undercut the play's serious themes with genuine humour, and Stewart-Jarrett doubles as Mr Lies, the guide to Harper's other world. 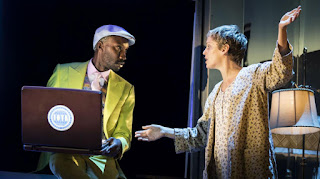 I still have a little over half of the play to go - I'll be back at the Lyttelton next week for that - so I'll hold off making any conclusions until then, but so far the ambition of both writing and production is working for me, and giving me plenty to think over until it's time for Perestroika.

Angels in America, a Gay Fantasia on National Themes Part 1: Millennium Approaches by Tony Kushner is booking in repertory until the 19th of August at the National Theatre's Lyttelton (returns, day seats and ballot tickets only.)