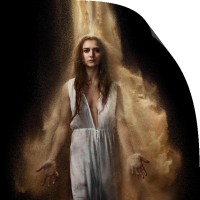 It's looking as if the successful Les Blancs was a fluke, and Yaël Farber really does believe that people walking around a stage incredibly slowly is the very essence of Dame Theatre. Her Salomé, which she writes as well as directing, has the tagline "the tale retold," but it's arguable whether it does even that - if you were raised in a non-Christian society and had never heard of Salomé, would you be any the wiser after this? I wouldn't put money on it. She's the niece and adopted daughter of King Herod, who lusts after her and demands an erotic dance from her in return for anything she desires; she asks for the head of the prophet Iokanaan, also known as John the Baptist. On stage the story is best known in the sole tragedy written by Oscar Wilde - which the RSC are, coincidentally, about to stage - in which her motives are those of a vengeful woman spurned, but Farber has a different interpretation of why she was so bloodthirsty.

This play is a two-hour exploration by Pilate (Lloyd Hutchinson) of the mystery of why she did it, made redundant by the fact that we've been given the answer in the first five minutes. 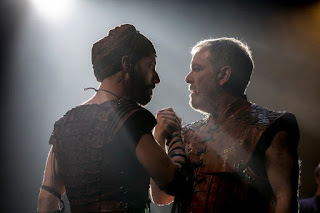 Farber has fixated on the fact that the Bible doesn't give the dancing woman a name, "Salomé" only having been adopted at some later point. As such, the older version of the character who narrates the play is called Nameless (Olwen Fouéré,) telling us her secrets as she knows she's close to death. In flashback she's played by Isabella Nefar, referred to as "Salomé-so-called" to really ram the point home. Iokanaan is essentially a political dissident on hunger strike, but the Romans are force-feeding him. Salomé-so-called is a sympathiser who demands his head to give him the martyrdom he wants, and to spur his followers to a violent uprising. 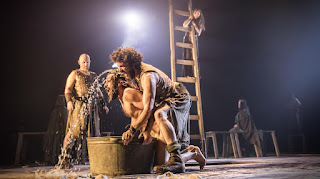 The production opens with a huge circular lighting rig, which has been hanging just above the stage, getting raised up into the flies, making it look like E.T. was going home. And that wasn't the only sci-fi that came to mind, as Pilate, Herod (Paul Chahidi) and the high priest Caiaphus' (Philip Arditti) half-hour chat about aqueducts reminded me of the trade negotiations that everyone remembers with such fondness from the Star Wars prequels. To a constant soundtrack of two women wailing, everyone wanders around ponderously, trying to make sense of humourless, portentous lines that sound profound until you think about them for two seconds and realise they don't actually mean anything: "Colonisers move in concentric circles." "Your saliva is the secret sauce of my life." "I tend the vineyard, but it is not my vineyard I tend." 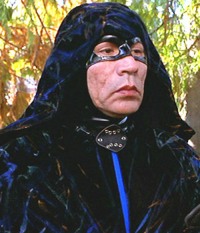 It reminded me of nothing so much as a teenager's overly-earnest poetry - The Secret Diary of Yaëldrian Mole, Aged 13 3/4. 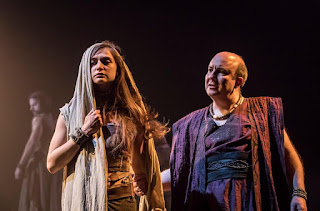 Of all the actors left stranded on the stage I felt sorriest for Chahidi, who's got to skulk around Salomé-so-called leering like a particularly misjudged pantomime dame for two hours. This being a Salomé story there is of course a
SEVERE VADGE WARNING!
although not in the dance as you'd expect, she just takes her frock off in Iokanaan's cell, possibly to show him that the Brazilian wax is misnamed and it was actually invented in ancient Judæa. As for the dance itself I can't tell you anything about it because Farber's plonked her actors downstage for it, blocking the view of the front half of the stalls. I know there's only about three professional directors who give a shit about blocking any more, but managing to screw up the sightlines on the Olivier stage is quite the feat, and extends to Iokanaan's entire dialogue: Ramzi Choukair speaks all his lines in Arabic, which is translated on a screen, but there's usually actors milling around in front of it, or props, or at one point a ladder raised right through the middle of it, so you can't actually see more than a third of the surtitles. 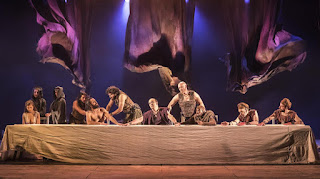 So it's an effort to find out what he's even saying, and as the production's sucked the audience's energy out by this point, nobody's willing to make the effort. And if it's Iokanaan's words that move Salomé-so-called this leaves a great big hole in the middle of the play where, presumably, the audience caring about any of it should have gone. But it seems unlikely that the audience was ever really considered much in putting this together, and between this and The Crucible it becomes apparent that Farber (who apparently had originally planned to direct Wilde's version but decided she could do better) believes herself entitled to vast swathes of people's time. Looking around at the audience plenty of people seemed to be nodding off; I didn't myself, though not from lack of trying as it would very obviously have been a better use of my time. Inept, inarticulate, incomprehensible and interminable, this is the sort of disaster that ends careers, hopefully not those of the innocent actors stuck in the middle of it.

Salomé by Yaël Farber is booking in repertory until the 15th of July at the National Theatre's Olivier.