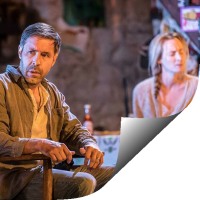 The last time Jez Butterworth wrote a 3-and-a-half hour rural epic for the Royal Court Downstairs it was the mega-hit Jerusalem, and his latest looks to replicate at least some of that success: It sold out at the Royal Court and had already announced a West End transfer months before opening. But where Jerusalem was a very particular vision of England, The Ferryman takes us to 1980s Northern Ireland and the issue that's dominated centuries of its history. The Troubles are both distant and ever-present in a remote farm in County Armagh where IRA man-turned-farmer Quinn Carney (Paddy Considine) now lives with his extended family. As well as his wife Mary (Genevieve O'Reilly) and their seven children, this includes several elderly aunts and uncles plus his sister-in-law Caitlin (Laura Donnelly) and her teenage son Oisin (Rob Malone,) who've lived there ever since Quinn's brother vanished ten years earlier.

It's the day of the harvest on the farm but it's also going to be a significant day for the family as the body has finally been discovered, preserved in a bog with a bullet to the back of the head, and finally putting an end to Caitlin's hopes that her husband might still be alive. 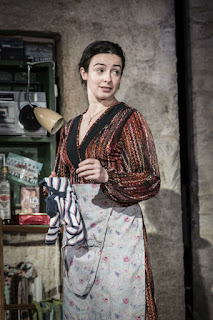 To a background of news stories about Margaret Thatcher refusing to treat the hunger strikers as political prisoners, this forms the core of the play's story, as a feared IRA Lieutenant (Stuart Graham) tries to ensure Quinn doesn't implicate them in any inquiry into his brother's death, which it's heavily suggested was in retaliation for Quinn leaving. But Butterworth really is looking at creating a family epic, despite the single set and a story that takes place over 24 hours. In the farmhouse (designed by Rob Howell) there's a seemingly endless array of characters coming down the stairs and as well as Quinn's generation - his unspoken, reciprocated love of Caitlin is the other theme running through the story - we also get perspectives of those before and after him. 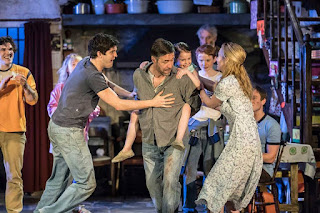 So the older generation is mainly represented by Aunt Pat (Dearbhla Molloy,) who was at the Easter Rising and has been left angry and bitter for the rest of her life. The first half of the third act is largely concerned with Quinn's oldest sons getting drunk with their cousins, the Corcorans: Shane Corcoran (Tom Glynn-Carney) is fired up about fighting the English and his actions are very likely to get him into trouble; although equally patriotic, Quinn's sons JJ (Niall Wright) and Michael (Fra Fee) are much more skeptical of the IRA, having grown up around an aunt in a state of limbo due to not knowing whether she's a widow or not, and Oisin who's clearly growing up with some psychological damage. 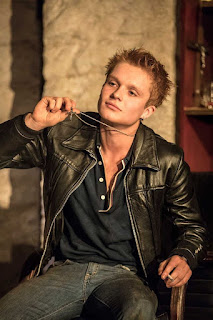 There's also a constant air of concern due to the presence of Tom Kettle (John Hodgkinson,) an Englishman with learning disabilities who helps around the farm, but who the more militant members of the family view as the enemy, and if drunk enough they might turn on him. On the other end of the scale there's an air of whimsy provided by Aunt Maggie Far Away (Brid Brennan,) who spends most of the time in a world of her own or convinced she's back in her childhood, but occasionally flashes out of her dementia to provide stories of the family's past without the taint of sectarian anger. 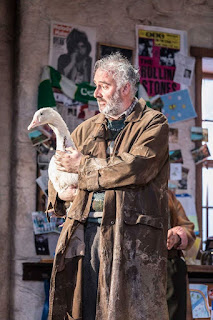 In other words Butterworth is throwing everything at the stage, also including live rabbits, geese, babies, hilariously sweary little girls ("Shit the bed, it's Ian Paisley!") and Chekhov's razor blade, and director Sam Mendes is successful in turning this into a fantastically well-textured, three-dimensional portrait of both the family and the times they live in. It could have been a mess and everyone pulls together to make it something special, although with it joining the ranks of high-profile super-long plays it's worth questioning whether it justifies the amount of time it demands. 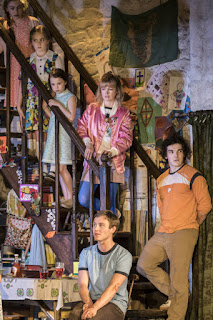 For me it does, for the most part, as that layering of stories and characters is what makes the evening, although that's not to say individual scenes couldn't have been trimmed a bit. Almost every character-establishing scene could have said what it does with a couple of lines fewer, and if it could have kept down to the three-hour mark the explosive finale might not have come through a haze of tiredness. But ultimately if a show demands this much of your time it has to be for the right reasons, and The Ferryman does that, taking its time not out of self-indulgence but to immerse the audience in a frightening but at the same time funny and welcoming world.

The Ferryman by Jez Butterworth is booking until the 20th of May at the Royal Court's Jerwood Theatre Downstairs (returns and day seats only,) then from the 20th of June to the 7th of October at the Gielgud Theatre.

Running time: 3 hours 20 minutes including one interval and one 5-minute pause.