Previously, on Angels in America... 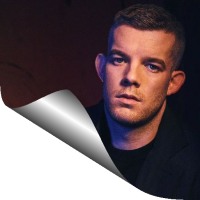 I can joke but while I may have seen the two parts of Angels in America a week apart, Phill, who could only get tickets two months apart, wondered if he'd need a "Previously..." at the start of Part 2 to refresh his memory. And it turns out the National have thought of people in that predicament, as my reminder email about Perestroika included a short YouTube video summarising the major events of Millennium Approaches. These included the brief appearance by Ethel Rosenberg (Susan Brown,) a woman convicted of treason decades earlier, whose execution Roy Cohn ensured by dubious means. Her ghost continues to appear to Cohn (Nathan Lane) as a patient, ominous harbinger of his own much slower death from AIDS. There's also a bigger role now for Belize (Nathan Stewart-Jarrett,) who's got the unenviable job of being Cohn's nurse, and whose acidic put-downs make him the right man to stand up to the notorious lawyer's vitriol.

Where the first part's subtitle reflected a sense of dread, Perestroika suggests a new start, but just like the real fall of the Communist bloc the rebirth won't come without some pain. 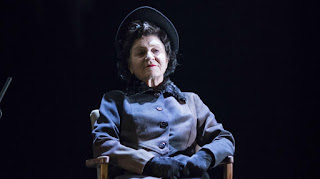 Joe Pitt (Russell Tovey) has left his wife and moved in with Louis Ironson (understudy John Hastings, good but a bit low-key compared to the explosive performances surrounding him.) We see both of these characters in a starker light this time, Louis doesn't have as many moments of rambling comic relief, which leaves him quite simply as the man who ditched his lover as soon as he got ill, who can't get forgiveness as easily as he hopes. Joe's coming out has given him a euphoric sense of freedom - including a scene where he strips completely naked. (Only rear nudity, but Tovey's arse is hardly a consolation prize, and Hastings must have been getting quite the view*, as from what I could see dangling† there was no modesty pouch.) 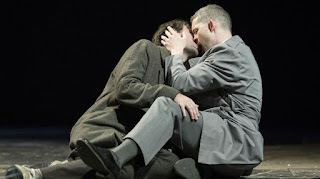 But just as Louis is forced to confront the details he hasn't wanted to know about his new lover, the audience learns them too, including the way Joe's self-loathing has had a real damaging effect on other gay people - particularly how, in his role as Cohn's protégé, he's drafted a number of deeply homophobic court rulings. Joe possibly ends up the play's most tragic figure, as everyone else at least finds a way forwards with their lives (except for Cohn, who moves forwards into an afterlife,) but once Louis and eventually even Harper find they don't need Joe any more, he's left adrift. 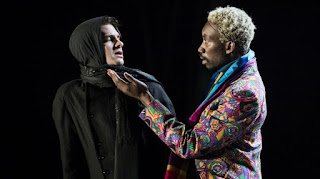 Louis' Jewishness and Joe's Mormonism are regularly brought up, so it's ironic that the character who least defines himself by religion is the one to get an angelic visitation: At the end of Millennium Approaches, after numerous prophecies and portents, Prior Walter (Andrew Garfield) was finally visited by the Angel (Amanda Lawrence.) But the message he receives from her is a disappointing and disturbing one, as the angels turn out to be a reactionary force who want things to stay as they are or, ideally, go backwards. Prior rejecting their chosen destiny for him is the major arc of the play, in a second part that ramps up the magic realism but also the philosophising, which starts to border on lecturing. The famous anecdote about the original production of Perestroika is that Tony Kushner was eventually banned from the rehearsal room as, instead of re-writes on the script as it stood, he kept delivering additional scenes. Original director Declan Donnellan put a stop to this before the play became unperformable, but at four hours long it still feels bloated in a way that Part 1 never did, the characters' stories moving on but not as fluidly as they did before. 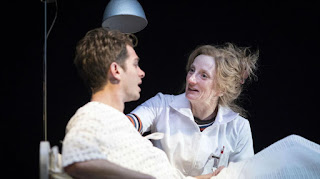 Marianne Elliott could perhaps have done a bit of editing of her own to counter this, but what she has done is really take advantage of the technical possibilities of the Lyttelton to bring the play's flights of fancy to life. She and designer Ian MacNeil have come up with a change of styles that gives each part its own visual identity - where Millennium Approaches' scene changes were done very precisely on three revolves tight to the front of the stage, Perestroika's signature move is much more organic, as the whole stage has been opened up and the "Angel Shadows," puppeteers who also operate Lawrence's wings, scuttle like crabs around the stage to bring props on and off. Where Part 1 saw everyone claustrophobically boxed off into their own little worlds, Part 2 has their scenes look tiny and helpless in a wider context. 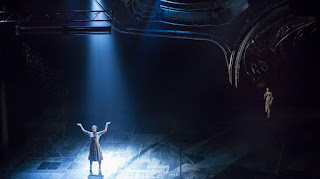 The increased supernatural element also allows more visual flair, most obviously from Lawrence's grotesque Angel, whose wings are ragged and who's particularly birdlike, stopping talking every so often to make a regurgitating sound. Prior eventually ascends to a kind of Heaven, which like all the other supernatural elements has some disappointments in store for him. While everywhere else the fantastical starts to appear to everyone, Harper Pitt finally finds a way to ground herself, Denise Gough really injecting some anger into her character as she sees the ways in which she's been mistreated, and finds ways other than Valium to deal with them. 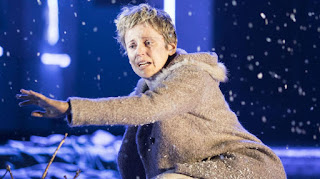 Garfield continues to have a likeably grounded, baffled response to the madness he's confronted with, although by the end I was tired of how often he resorts to going very camply high-pitched for comic effect at the end of a line. It's not like it's needed, when in a famously quotable script Kushner's given him most of the best lines (with Belize a close second.) The humour keeps showing up to lighten the portentous tone, including the running joke about how the arrival of the angels is portended by a raging erection, much like the arrival of Russell Tovey is, and references to Heaven being suspiciously like San Francisco. Although not everyone gets a happy ending this is a more optimistic part than the first one, with even Cohn getting a moving send-off. 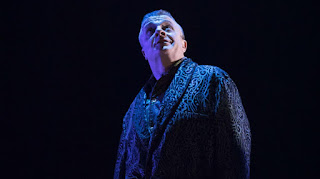 The fact that I've disliked the other Kushner plays I've seen made me wary even in the face of all the general enthusiasm for these shows, and hints of what I didn't get on with - the overwriting, the self-satisfied intellectualism and the sheer time he demands of you - creep up a little bit too much in Perestroika for the script itself it to be an unequivocal success. But its ambition has to be admired, an ambition matched by the production and the gutsy performances, which ultimately justify the hype and build this up to the level of event theatre.

Angels in America, a Gay Fantasia on National Themes Part 2: Perestroika by Tony Kushner is booking in repertory until the 19th of August at the National Theatre's Lyttelton (returns, day seats and ballot tickets only.)

*this is shortly after Tovey nibbled his nipple, so it's fair to say Hastings is Living the Dream. It's just that, given I don't know anything about the understudy's real-life sexuality, there's a good chance it isn't actually his dream.

†I say dangling, from the brief glimpse I got it looked much more the "tightly-packed" than "low-hangers" variety. YES I KNOW, but if I didn't I would be well off-brand and besides, one person's Too Much Information is another's Not Nearly Enough, and I know that my readership (both of them) would tend towards the latter, so I'm between a rock and a hard‡ place here. Anyway, in the grand tradition of M&S, these aren't just any old bollocks, these are Tovey bollocks and forgive me if I want to preserve the moment. Tovey bollocks and a quick bit of Tovey foreskin. From this, and the side view once he covered up with his clothes※ and turned round, I would also hazard a guess he has a personal grooming regime that's a bit more thorough than I usually go for, but it's Russell Tovey, that's hardly going to be a deal-breaker.

※again, not that I'm complaining at the sights we did get, but given that scene is first about him throwing caution to the wind and later being emotionally devastated, I don't think covering up would have been his priority, BUT WHAT DO I KNOW?
Posted by nick730 at 23:58