Theatre review: The Fear of Breathing

PREVIEW DISCLAIMER: The Fear of Breathing doesn't open to official reviewers until tomorrow. 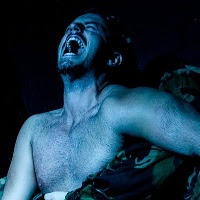 Last night on the way back from the theatre Richard asked me what I was seeing next; I said it was something about the Syrian revolution. Richard thought I must have got it wrong because that's still happening, but that's the thing about Dame Theatre, in many ways it can be one of the most up-to-the-minute ways of responding to a situation. The Fear of Breathing is a verbatim piece by Zoe Lafferty based on interviews she conducted along with Ruth Sherlock and Paul Wood, probably putting themselves in some danger in the process as there was a ban on journalists, as well as restrictions of the movements of foreign nationals within Syria. What the play, which Lafferty also directs, achieves is to give a vivid picture of revolution from the inside, as activists ranging from those making symbolic (but still potentially dangerous) gestures all the way to members of the revolutionary Free Army, tell and relive their stories.

Philip Lindley's pretty impressive set of volcanic cracks in ancient stone is bedecked with monitors, on which sometimes harrowing footage from within the conflict is screened (multimedia designed by Dan Shorten.) There's a bit of the feel of a TV news studio, appropriately enough in a play that keeps coming back to the wildly different stories being told depending on which news outlet you're watching. 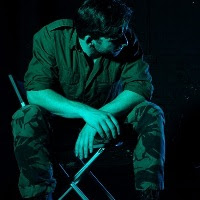 The play has collected some pretty distressing stories of a regime arbitrarily massacring its own people, while the West appears to stand back and let it happen (although the final, accusatory turn on the audience is a bit heavy-handed.) But perhaps the play's biggest strength is that in among the horrors of the torture and machine gun fire into crowds of children, we also have the activists' genuine, often gleeful enthusiasm for what they're doing: The atmosphere is not just one of an evil regime that must be grimly defeated, but also of a battle worth fighting, and revolutionaries who know they may not survive to see the fruits of their labours, celebrating them in advance. The other recurring theme the interviewees are keen to make clear is that despite what the official government story might say, this isn't a religious conflict and all faiths and sects are represented among the rebels. 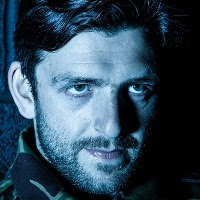 The emotional impact of the true events being described is heightened by some strong performances; Nicholas Karimi, fast becoming a Big Favourite Round These Parts, is an intense presence as Omar, a relentless activist; Sirine Saba gives a quietly heartbreaking performance as a grieving mother and a very different, likeable turn as a chipper DJ. And the Finborough seems to be where actors go to make up for past sins - after Tom Byam Shaw self-flagellating last year in atonement for Cirque de SolAriel, here Adam Youssefbeygi as student protester Quataba gets tortured as punishment for his part in The Oresteia (and gives a more focused performance in the process.) The play's not perfect, with some heavy-handedness at times and a single-minded point of view: The closest thing to a dissenting opinion is the lovable hotelier Peter (David Broughton-Davies) who's done quite well under Assad and is mainly concerned by the lack of income the uprising has resulted in; but even he starts to express concerns about the official story he's being fed by the government. Still, a powerful and never boring piece of political theatre.

The Fear of Breathing by Zoe Lafferty, edited from interviews and material collected by Ruth Sherlock, Paul Wood and Zoe Lafferty, is booking until the 11th of August at the Finborough Theatre.