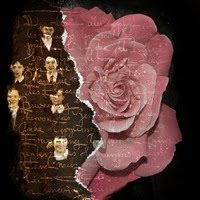 Although I've heard of Frank Wedekind's Spring Awakening and knew roughly what it was about, I'd never seen the original play on stage before. So I now come to it from the unusual position of being very familiar with the much-loved (but not by enough people to keep it open) musical adaptation. Would I be able to see it as anything other than the show I liked with the best bits taken out? The story revolves around three teenagers: Wendla (Ana Luderowski) is 14, and keeps asking her mother for the facts of life, but gets only evasive answers. Moritz (Joe Sowerbutts) isn't that bright, his life mainly consisting of studying for exams he has no chance of passing; having had it drummed into him that academic success is everything, the prospect of failing is enough to turn his thoughts to suicide. Meanwhile the central figure of Melchior (David Palmstrom) is a bit too clever for his own good: Seeing himself as an atheist and iconoclast, he's taught himself about sex from books, and his attempts to share his knowledge with his classmates will backfire horribly.

There's some rather good performances throughout, and Palmstrom is kind of adorable, but the production does settle after a while into a lugubrious pace with little variation. This did mean I got distracted at times by things like the slightly sloppy sound design, and Gina Rose Lee's anachronistic costume designs (I think it was meant to have been relocated to the 1960s but I couldn't swear to it.) It seems the musical did stick very closely to the original storyline, as much of what happens is familiar - there are a few small differences but as director John Fricker is also credited with an adaptation of Francis J. Ziegler's translation, I don't know how many of these are Wedekind's and how many specific to this staging: Melchior raping Wendla for example; apart from affecting how we see Melchior, it also rather lets Frau Bergmann off the hook if Wendla didn't consent to the sex, not knowing the consequences doesn't make much difference one way or the other. Overall, much as I was trying not to see this as the musical without the songs, this generally competent production lacked the spark of invention to give it an identity of its own.

Spring Awakening by Frank Wedekind, in a translation by Francis J. Ziegler adapted by John Fricker, is booking until the 14th of July at Brockley Jack Theatre.