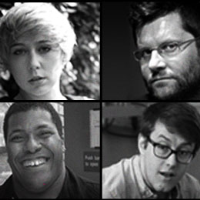 Word of mouth must have got out for the Royal Court's Playwright's Playwrights season of Friday afternoon readings at the Duke of York's, as its final installment was reasonably well-attended despite having probably the least starry cast of all the plays featured. The play itself might have been expected to keep people away as well, since David Eldridge is the last playwright asked to choose and direct one of the works that inspired him, and somewhat inevitably he's plumped for Robert Holman, whose Making Noise Quietly baffled, bored and irritated audiences in equal measure when it was revived at the Donmar a couple of months ago. The play Eldridge has chosen is another 1980s piece with themes of war at its heart, Across Oka, Holman's quietly tragic culture clash between East and West during the (by now thawing) Cold War.

It's 1986 and shortly before his death Jolyon (Paul Copley) tells 16-year-old grandson Matty (Matthew Tennyson, who was also in Making Noise Quietly) the story of how, as a boy, he was given the eggs of the rare Siberian White Crane by a Russian friend. Boys collecting their eggs can't have helped the fact that the birds are now almost extinct, and Jolyon has tried to contact Pavel (George Irving,) a relation of the Russian boy, now making a last-ditch attempt to breed new crane chicks. But by the time Pavel finds the family Jolyon is dead, and he bonds instead with Matty.

Across Oka seems to me both to embody the aspects of Holman's work that I and others disliked about the last revival, as well as later displaying the subtle, lyrical qualities that Eldridge was inspired by. The first act, that deals largely with the grieving process of an English family who don't actually like each other much, did make me wonder what (other than a sense of completing the set) had brought me here, as I found it so understated as to be outright dull, buried in obscure metaphor and its characters hard to get any kind of grip on. It's also an awkward fit for a rehearsed reading as the subdued nature of the characters' emotions translates into flat readings with no visual stimulus to make up for it (it's also a play heavy on stage directions.) Things are livened up by the arrival of a Russian ornithologist (aren't they always!) but it's the second act where the play soars: Matty and his grandmother Eileen (Margot Leicester) visit the USSR to stay with Pavel, his British wife Margaret and 14-year-old son Nikolai (Rupert Simonian.) The focus shifts to the relationship between the two teenagers and their cultural differences: Matty is more independent but also spoilt and selfish with a vicious streak; Nikolai can't understand how Western children could possibly go on holiday together without choosing a leader. Tasked with putting the incubated eggs back into nature the boys' relationship gets frosty, the unspoken suggestion being that Matty gets angry whenever Nikolai asks about his friends, because he doesn't have any.

Eldridge's cast (completed by Abigail Cruttenden and Marion Bailey as the boys' mothers) actually get a prop to use - as it's a shoebox with a couple of eggs in it, that the cast handle quite gingerly as if they might be, you know, raw and therefore fragile, the play's climax isn't too hard to guess, but it did draw gasps from this afternoon's audience when it came anyway. The deathly first act casts a shadow that makes this probably the reading I least enjoyed overall, but I found the second to be a piece of quiet genius.

Overall this quartet of readings has been an interesting little collection. Roy Williams made, for me, the best choice for the format of 24 hours between the cast first meeting and the audience arriving, as a one-act play with only three characters meant director and cast visibly having had the chance to at least do a little bit of work on the piece. But as the project was always meant to involve the current playwrights choosing with their hearts not their heads, it's not surprising if they didn't all take this into consideration when making their selection; so Polly Stenham picked an acknowledged masterpiece, but one that despite a good cast needed a bit more subtlety than almost zero rehearsal could provide. Nick Payne's choice was probably my second favourite of the quartet, as despite also choosing a long play, he went for one with a lot of story, that meant it could keep the interest even in a pared-down staging.

Across Oka by Robert Holman concluded Playwright's Playwrights at the Duke of York's Theatre.