Re-review: The Woman in Black

I had the chance to revisit West End long-runner (23 years now) The Woman in Black for free, and as I quite enjoyed it the first time I was happy to give it another look. With the film version having come out this year the story is more familiar than ever (though there are a few differences between stage and screen story) but Stephen Mallatratt's adaptation of Susan Hill's novel gets its scares in a strictly theatrical way that means it keeps its own identity. The current cast is Ken Drury as Kipps, the man with a story he's finally decided to tell after decades of silence; and Adam Best as the young actor he hires to help him present his reminiscences to an audience. The relationship between the two forms the backbone of the play, a surprising amount of the running time dedicated to the older man going from painfully awkward performer to enthusiastic thespian, throwing himself into all the supporting roles. The actor meanwhile plays Kipps' younger self when, as a junior lawyer, he was dispatched to the remote home of a recently-deceased client to sort out her papers, only to discover things that go bump in the night.

On a second viewing the play's maybe not as scary, since you go in knowing what techniques they'll use to make you jump. A different audience may have made a difference too, an inevitably more touristy one tonight not screaming quite as loud or as often as the largely school-party crowd the first time I saw the play. But it's still a lot of fun, and I think has more scares than the film - although in recent years shows like Ghost Stories and the annual Terror portmanteaus have tried to redress the balance, scary plays are a lot rarer than scary movies, and so the visual grammar of the latter is more familiar and will always have to do more to take us by surprise. 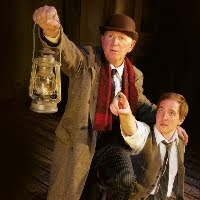 The other reason I think Mallatratt and director Robin Herford's approach has the edge is the focus on humour, which means the spooky moments can catch the audience a tad more unawares and makes for a more varied evening: One thing I didn't like about the Hammer version was the middle act's one-note attempt to sustain tension over half an hour that inevitably had diminishing returns. I also prefer the play's ending - though the body count's lower, it's somewhat crueller and pulls the rug out from under the characters and audience, which seems more appropriate to this kind of story. On a second viewing I thought the stage version of The Woman in Black had a couple of "cheat" scares where the sound effects give you a jolt at a time when the onstage action hasn't earned it. The interval probably shouldn't be there either, the show's short enough to play straight through and it would only keep the tension up to do so. But as far as West End juggernauts go, the fact that The Woman in Black is such a purely theatrical experience, relying on performance, sound, light and shadow rather than big names or bigger budgets, makes it a show I'm rather glad we've still got around.

The Woman in Black by Stephen Mallatratt, based on the book by Susan Hill, is booking until the 14th of December 2013 at the Fortune Theatre.