Although the BBC's Hollow Crown series was an original commission rather than adaptations of previous stage productions, I'm going to count it as "stage-to-screen" and review it here as the directors and many of the actors are best known for their stage work, and the intention seems to have been to bring theatrical experience to bear on putting Shakespeare on TV. 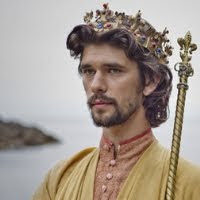 The Hollow Crown, the BBC's adaptation of Shakespeare's second (in order of writing) history cycle was broadcast in June and July, but I've held off on watching them as there's a comparatively theatre-light month ahead. So I'm going to spread them out across August (actually Henry V might wait a bit longer, since it's not like there's any shortage of that play at the moment.) But first up Rupert Goold directs Richard II, and brings the title character's most famous speech ("For God's sake, let us sit upon the ground" etc) right to the start as a voiceover which makes for a nice opening not just to this play, but to the quartet of plays as a whole: The line about kings "haunted by the ghosts they have deposed" will prove particularly pertinent to his successor. Utterly convinced of his divine right to rule England, Richard II deals capriciously with the lives of his subjects, but one abuse of power too many leads to a coup that his circle of flatterers is powerless to stop. But a deposed king can still be a figurehead to rebels, and the new king Henry IV won't rest easy as long as Richard's alive.

The director is of course famous for his high-concept approach, and although this isn't too much in evidence as he's working within the confines of a series, there are little glimpses still apparent. Goold has said that, of an original concept to base the portrayal of Richard on Michael Jackson, only the pet monkey remains in the final film. I actually think a bit more than that has made it on screen. Ben Whishaw's Richard is a high-pitched, detached, otherworldly figure of ambiguous sexuality: He has, of course, a queen (Clémence "doesn't know which hole you're supposed to put the Haribo in" Poésy) who when he eventually sees he seems genuinely attached to; but for the most part he's convinced to stay away from her by a coterie of pretty boys he fawns over. There's also something about the messianic imagery he piles onto himself with a trowel once he realises he's on the ropes, that brings to mind Jackson's infamous Brits performance. (The St Sebastian imagery that Goold lays on him is another nod towards his sexuality, although in the circumstances I could have done without it as it gets confused with the Christ imagery and all comes off a bit messy.) 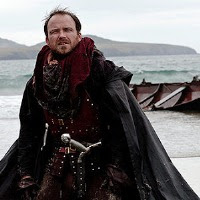 The role of his nemesis goes to another former Hamlet, and with such a fey Richard Rory Kinnear makes a suitably gruff contrast as the usurping Bolingbroke. Whishaw plays the abdication scene very much as a performance, with most of the court (especially David Morrissey's cold-blooded Northumberland) impatient at the theatrics, but the guilty Bolingbroke, now Henry IV, visibly uncomfortable. As well as Goold regulars like Patrick Stewart (as John of Gaunt) and Tom Goodman-Hill (as Scroop) the production has access not only to big names but respected actors who might not be as well-known on screen but help bring quality to the smallest of roles. 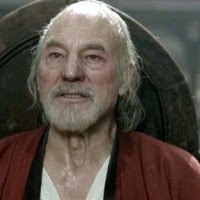 Stewart of course gets the play's other most quoted speech, Gaunt's dying "This England" lament. But David Suchet lends a gentle gravitas to the Duke of York that forms the backbone of the production, and makes us a lot more interested in his family story near the end of the play than I usually find. It doesn't hurt that Lindsay Duncan is there in essentially a cameo as the Duchess, while their son Aumerle is played as permanently confused. But this might not be intentional as he's played by Tom Hughes, and "confused" is the face he can do. Highlights would basically require listing most of the cast but the likes of James Purefoy, Harry Hadden-Paton, Adrian Schiller, Lucian Msamati, Finbar Lynch and Peter De Jersey all crop up, and we even get David Bradley as the gardener who accidentally lets slip to Queen Isabella the news of her husband's impending abdication. 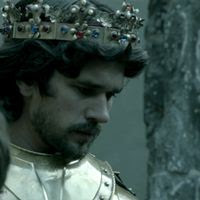 If not overflowing with the Gooldian touches that have you picking out ideas from a production long after seeing it, this Richard II does boast a lot of the storytelling clarity that the director's also so good at. The screenplay, which the director adapted with regular collaborator Ben Power, rockets through the opening acts as the king banishes Bolingbroke then steals his inheritance, briskly giving us a picture of who these characters are: Richard's chilling dismissal of Gaunt's death is immediately followed by him appraising his late uncle's possessions as if he's on a daytime TV antiquing show. Whishaw's isn't the most sympathetic Richard II you'll ever see, and it's questionable whether, even at the end, he truly gains any insight into what it means to be human, as most portrayals of the king do. It is a pretty iconic, sometimes odd, rounded if not relatable interpretation of the part though.