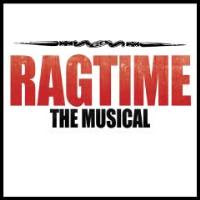 This year the Open Air Theatre in Regent's Park have opted to run just two shows in repertory over the summer, rather than their usual season of four. Ragtime, the 1996 musical adaptation of E.L. Doctorow's novel with book by Terrence McNally, music by Stephen Flaherty and lyrics by Lynn Ahrens, is a story of formative years in modern American culture, following three families from different backgrounds, whose stories will intertwine over the early years of the 20th Century: A well-off white family whose Father (David Birrell) goes off on a Polar expedition only to find some surprising changes at home when he returns; an unmarried black couple with a newborn baby; and a widowed Jewish immigrant (John Marquez) and his daughter. Through them we see an America that's still in the grip of institutional prejudice, but in which the voices calling for civil rights are getting louder. 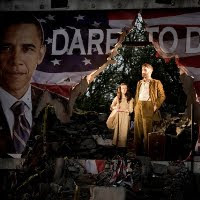 There's a bit of a sense of déjà vu as you arrive at the Open Air Theatre; Jon Bausor designed the RSC's recent Shipwreck Trilogy, and for his set design here he's reconfigured the stage into a thrust that looks a lot like the RST's diving board. There's even a crane to carry pieces of set and the odd cast member on stage, just like in The Comedy of Errors. The set here has a very distressed look, of a junkyard filled with rubble and modern rubbish, and a cast dressed in modern-day clothes (costume design by Laura Hopkins) gradually change into looks more suited to 1906 as the show goes on. It's a striking visual conceit although some of the modern-day references make more sense than others: The tattered Obama election poster that forms the backdrop seems a suitable image to overlook a story tracing the earliest days of black Americans demanding the same rights and respect as whites; the iPad someone deposits onstage mid-song at the end of the first act is a bit more baffling.

The show itself boasts some strong songs and a lot of powerful emotional moments. The slightly odd framing device did mean it took me a while to really get into the story but once its various threads started to become clear I found myself really involved and enjoying it. Given the changes made to the stage (even some of the seating has been rejigged to accommodate the new thrust) it's a shame director Timothy Sheader and especially choreographer Javier de Frutos have largely blocked the action straight out to the front, but regardless there's still plenty of spectacle wherever you end up sitting. 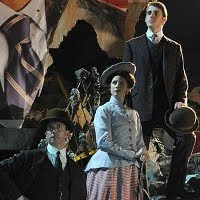 This theatre has a good track record with musicals and Sheader's found another strong cast here: This is a particularly good show for the women, with Rosalie Craig as The Mother outstanding, while Claudia Kariuki can't half belt out a tune - as Sarah she's also gifted with two of the show's strongest numbers, "Your Daddy's Son" and "Wheels of a Dream," the latter with Rolan Bell who also gets some showstopping moments of his own as the much-abused Coalhouse. Elsewhere Harry Hepple, the star of last year's most shitmazingly insane show Pippin, plays Craig's idealistic Younger Brother, whose tendency to get entranced by charismatic figures can land him in trouble. The whole thing is peppered with appearances by real-life figures of the times, like Harry Houdini (Stephane Anelli) who has a tendency to make surprise appearances out of locked parts of the set. It took a while for me to warm to (and the fact that it sets my hayfever off like crazy means I can never really love this theatre and am often distracted) but by the end I found Ragtime moving and impressive.

Ragtime by Terrence McNally, Stephen Flaherty and Lynn Ahrens, based on the novel by E.L. Doctorow, is booking in repertory until the 8th of September at the Open Air Theatre, Regent's Park.