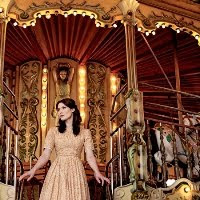 I'm going to take a wild stab in the dark and say Rodgers & Hammerstein weren't feminists. After a rather unfortunate experience with South Pacific I'm not sure what took me back to the Barbican a year later for more of their back catalogue, this time Carousel in a production by Opera North. This is one of Rodgers & Hammerstein's more regularly revived musicals, and the production has had some glowing reviews, but it won't be getting one from me. Julie Jordan (Gillene Herbert or Katherine Manley - multiple performers are listed on the website and the Barbican had no notice board up to say who was performing tonight) is a female lead (I'd tell you more about her character if she had one) who falls for Billy Bigelow (Eric Greene or Michael Todd Simpson.) He's just been fired from his job at a carnival carousel but they get married regardless, and within weeks he's smacking her about - in what I'm sure is meant as some kind of running joke, Billy keeps complaining that people have got him wrong: "I didn't beat her, I hit her."

Carousel is apparently admired for its score, and I'll agree that out of context the music on its own is very good. The songs are less interesting though - it's a musical remembered for one song ("You'll Never Walk Alone") and the rest were, for me, just dull and largely tuneless, not R&H's finest hour. Ian and I weren't too impressed by the interval ("will the cipher and the wife-beater have a happy ending?" is a difficult story to give a shit about) but opening the second act with a song about a clam bake and how the food was quite nice, wasn't it? borders on parody. So the music wasn't enough to distract from how horrible the gender politics is, and it just gets worse as the show goes on. I actually facepalmed once we got to the bit where Julie sings a whole song informing the other women that marriage is miserable but they just have to put up with it. 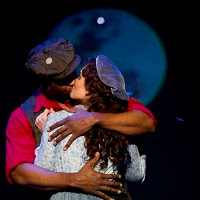 In the second act, a bungled robbery sees Billy die and a big climactic goodbye, only for the show to go in a completely different direction as he ends up outside the gates of Heaven trying to be judged fit to go in (NB not even in these circumstances does he regret "hitting-not-beating-LOL" his wife.) Obviously more than two hours in is the right time to reveal that it's a completely different kind of story than it first appeared. The Star Keeper (John Woodvine) sends him back to earth 15 years later to see if he can help his chances by doing something good for his daughter. He kinda doesn't really bother to do this, although on arrival he does get to watch an endless ballet section whose overall story seems to be "his daughter's a bit of a skank but Billy doesn't really have a problem with this." And finally we see Julie imparting a piece of wisdom to her teenage daughter, which is that "sometimes when someone hits you really hard it feels like a kiss." Presumably because what with all the "I didn't beat her, I hit her" LOLARITY earlier on it might seem like the show wasn't taking domestic violence seriously, so R&H wanted to make it clear that they do take it seriously, and are basically in favour of it. 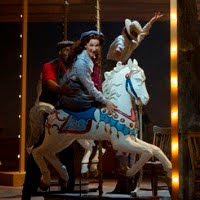 You can't expect a musical from 1945 to have 2012 values, and I don't, but I do kind of expect a 2012 production to look at the work in a different way, and Jo Davies' production resolutely doesn't. The characters, attitudes and situations are presented as is, without any suggestion that from a modern perspective this ought to be treated as a hugely dark story. I felt as if we were meant to get behind this horribly damaged couple, and that's just not something myself or Ian, who was my theatre companion again tonight, can happily do. Loads of people in the audience tonight seemed quite able to though, which is frankly a bit worrying. Elsewhere, the look of the show is something of a mixed bag - Anthony Ward's sets come up with a nicely lo-tech way to create the titular carousel (which only appears during the overture) but at other times the sets look cheap on the huge Barbican stage. Oh well. The singing's pretty good.

Carousel by Richard Rodgers and Oscar Hammerstein II is booking until the 15th of September at the Barbican Theatre.