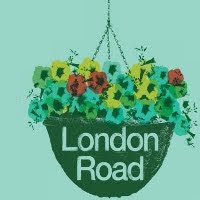 London Road topped my list of favourite theatre of 2011, and I was far from a lone voice: So popular was Alecky Blythe and Adam Cork's verbatim musical that the National Theatre has brought it back, moving it from the smallest auditorium to the largest as one of this year's Travelex £12 shows. Despite seeing it twice in the Cottesloe I couldn't resist one more visit in its new home, and this time brought my mum along for the ride. In 2006, in the run-up to Christmas, five prostitutes were murdered in Ipswich. Alecky Blythe, who creates her plays by editing together real-life audio interviews, went to Ipswich to speak to the residents as the events were unfolding, and then again in the subsequent couple of years to find out how they were coping with the fallout both from the killings themselves, and the media circus that came to town.

Anyone who, like me, was already familiar with the show, would be pleased to enter the Olivier and see a few hanging baskets of flowers suspended from the ceiling, as Blythe's focus was on the residents of the road where the prostitutes plied their trade, and where killer Steve Wright lived. Their determination to build a real community out of the tragedy is centred on an annual gardening competition that changed the whole feel of London Road: From red light district (a term the residents object to strongly - in reality it was a residential road the prostitutes moved to when work on a nearby football stadium stopped them using their usual streets) to "gardens galore." 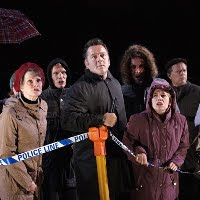 The competition acts as a framing device for the play and I was surprised by my own reaction, by how tearful I got as soon as the show's signature tune "London Road in Bloom" kicked in, with its now-famous refrain of "Begonias, and... Petunias, and... Um. Impatiens and things." I think it might be the way it encapsulates how Blythe's editing and Cork's setting it to music have turned regular people's most banal everyday pronouncements into something beautiful, finding art in the simplest things. Of course, London Road also turns the banal into something very ugly, not just because the subject matter is a serial killer, but also in the way the murders bring people's fear, prejudice and anger to the surface. Kate Fleetwood returns as Julie, the lovable driving force behind the London Road in Bloom contest, who's got nearly seventeen hanging baskets in this back garden, believe it or not. Her likeability is one of the reasons Julie's casual declaration that she'd like to shake Wright's hand for ridding the street of the prostitutes remains perhaps the show's most shocking moment. In fact almost all of the original cast have returned, including the memorably gravel-voiced Nicola Sloan, Nick Holder in a more understated role than he usually ends up in as her husband, Duncan Wisbey frequently displaying a dry comic delivery, and Michael Shaeffer as the news reporter stumped by not being allowed to say "semen" on TV before the watershed. Linzi Hateley and James Doherty are the new cast members fitting in perfectly. 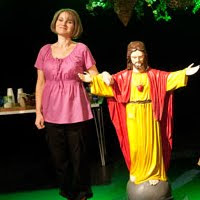 Faced with a very different, much bigger theatre, director Rufus Norris has resisted the temptation to change too much - Katrina Lindsay's set is pretty much a larger version of the original, with a few metal silhouettes creating background characters, and more use of projection and video. Norris has taken advantage of the revolve, but only very occasionally to make for smoother scene transitions. It was never going to be as easy to fill this space with flowers as it was in the Cottesloe but they do their best, and lighting designer James Farncombe (original lighting was by Bruno Poet) has helped create a bit of beauty out of the hanging baskets. There's perhaps something a bit broader about the comedy when expanded into such a large space, and the lightness of the flower contest at either end of the show seems to be the overwhelming impression left rather than the oppressiveness of the story in a smaller theatre. But ultimately I don't think London Road's strange magic has been majorly compromised by the move. It's not quite as intense an experience as it was when it first burst onto the scene but judging from the excitement not just of my mum at seeing something genuinely new that works so well, but also from the rapturous applause at both the interval and the end, this is still something special.

London Road by Alecky Blythe and Adam Cork is booking in repertory until the 6th of September at the National Theatre's Olivier.