Theatre review: The Curious Incident of the Dog in the Night-Time 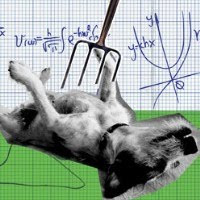 Mark Haddon's novel The Curious Incident of the Dog in the Night-Time was a huge hit a few years back and clearly remains beloved: Simon Stephens' stage adaptation for the National Theatre sold out its entire run long before it even started previewing. 15-year-old Christopher Boone has behavioural problems on the autistic spectrum (contrary to what the book's original blurb stated, Haddon doesn't like his character's condition labelled as Asperger Syndrome.) He dislikes strangers and human contact in general, screaming in panic if even one of his parents touches him. He does like animals though, as well as maths and the colour red (but definitely not yellow or brown.) At the start of the play Christopher lives alone with his father in Swindon, his mother, as far as he knows, having died two years earlier. When he finds his neighbour's dog violently killed and is falsely accused of the crime, he sets out to discover who really did it - only to find a lot more secrets than he was expecting.

I was among those who really loved Haddon's book so was really hoping Marianne Elliott's production could at least come close to doing it justice, and Stephens and Elliott have passed with flying colours: The first act follows the book's structure pretty closely, with Christopher's teacher Siobhan (Niamh Cusack) reading out chapters from the book he's writing about his "investigation." Bunny Christie has designed an in-the-round set which turns the Cottesloe's pit into a huge sheet of graph paper, transformed through everything from sophisticated video projections (by Finn Ross) and lighting design (Paule Constable) to trapdoors and simple chalk drawings on the floor, into both the real landscape and the one inside Christopher's head. 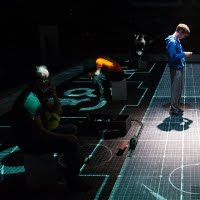 In fact Elliott and her creative team use every theatrical technique available to them, possibly because this is what Christopher himself would do, as he tells us in the Appendix (yes, like the book, the play has an Appendix - let's just say don't hurry out of your seats too quickly after the curtain call, it's joyous.) In with all the technology we also get physical work choreographed by Frantic Assembly's Scott Graham and Steven Hoggett, which provides among other moments a scene of Christopher imagining his future as an astronaut, with the ensemble lifting Luke Treadaway on their shoulders among the stars - the first, but not only moment to have me tearing up a bit. This use of every available resource extends out into the auditorium - the story is after all told entirely from the boy's point of view so we're brought right into his world. Seats that happen to be prime numbers (Christopher's favourite thing) are marked out in white with a little card telling the person sitting in them that they're special. And without giving away the childlike glee of the first act's ending, I'll just say "trains." 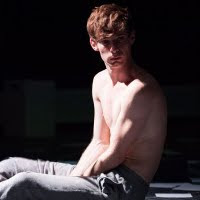 Treadaway will surely be high on all next year's awards shortlists for his role as Christopher, managing to replicate the book's extraordinary feat of having us empathise with a character so removed from the very concept of empathy, and whose idea of what is fascinating often differs quite a lot from most people's. This is an absolutely stellar cast overall though, with Cusack striking the perfect sympathetic note as the teacher who can only do so much to help. Paul Ritter has one of the toughest jobs as his father, whose frustration at dealing with a son almost entirely defined by eccentricities sometimes breaks out into violence, but who clearly has a huge store of love. His attempts to get back his son's trust are heartbreaking, as is Nicola Walker in another pivotal role, she also made me well up. Christopher's fascination with Sherlock Holmes isn't as major a feature in the play as it was in the book (the cumbersome title is meant as a Conan Doyle pastiche) but the cast does include Una Stubbs, whose most recent claim to fame has been in Sherlock, as Mrs Alexander, the neighbour who accidentally lets out that his father's been lying to him about something very important. Meanwhile among a strong ensemble Sophie Duval has a scene-stealing running gag as a monosyllabic headmistress. 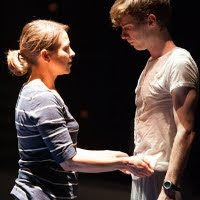 In the second act Stephens changes the storytelling device from Siobhan's narration, to her suggestion that the school turn Christopher's book into a play. I wasn't sure if this jump in styles halfway through the play would be a step too far but in the end I found it worked: The lead's incredibly literal mind can translate into pedantry, which Stephens and Treadaway use to comic effect as Christopher occasionally finds fault with the way his story is being told, disagreeing with some of the casting choices and breaking the fourth wall. Equally heartwarming and heartbreaking, The Curious Incident of the Dog in the Night-Time is an exemplary piece of theatre that succeeds both in translating the book onto the stage very faithfully and in creating a very pure piece of theatre that revels in all the possibilities of the form: From the writing to the physical performance, the simplest tricks to technical excellence and a couple of animal-based coups de théâtre that prove the other half of the "never work with children or animals" adage which, as in A Doll's House, reminds us that any amount of brilliant acting can be upstaged by an injection of cute. With the Cottesloe run sold out this has to be a cert for a transfer of some kind - with the Olivier suddenly finding itself without a Christmas show this year, surely the only question is whether this show's technical elements can be adapted to the larger stage in time to move it there once its current run ends. 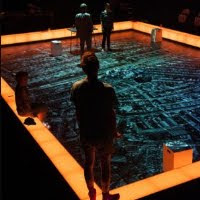 The Curious Incident of the Dog in the Night-Time by Simon Stephens, based on the book by Mark Haddon, is booking in repertory until the 27th of October at the National Theatre's Cottesloe (returns and day seats only) and screening live to cinemas on the 6th of September.