Theatre review: I Am a Camera 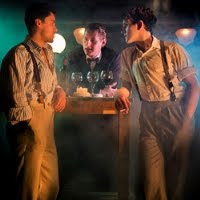 Cabaret returns to London next month but first up we get the play that inspired it, John Van Druten's I Am a Camera, based on Christopher Isherwood's recollections of his time in Berlin. In the suitably dingy space of Southwark Playhouse's Vault, designer James Turner has created a room in Fraulein Schneider's boarding house on a two-sided raised thrust - it doesn't come with any mod cons, but it does come with a three-piece band playing mournfully behind the walls. It's the room that Isherwood (Harry Melling) occupies at the start of the play, but his ailing finances mean he's about to move to an even smaller and cheaper room across the hall. Replacing him in this room will be another English ex-pat, Sally Bowles (Rebecca Humphries,) an aspiring actress with a fondness for all the wrong men. Over the summer and autumn of 1932 we follow their friendship, and the way they and their bohemian circle of friends react to the rise of the Nazis.

This is a story that's become familiar in both a more spectacular form as a stage and film musical, and in a more sexually explicit form in last year's TV film Christopher and His Kind (written in 1951, I Am a Camera skirts around the issue of Isherwood's sexuality, although to modern eyes his and Sally's is recognisable as a fag-and-hag relationship.) In these circumstances it's possible for the original work to pale in comparison, but Anthony Lau's production does an excellent job of showing the play off as a warm, witty and gripping piece of theatre in its own right. 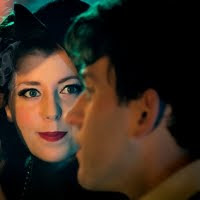 Melling, who's making a career out of rather camp, erudite, foppish characters, is in his element, if anything a bit toned down in his performance here. He may be the central character and narrator but he is, after all, the camera of the title, taking mental snapshots of the dying world he's experiencing, waiting to "expose" his pictures when he eventually sits down to write, and in the meantime letting the larger-than-life characters around him tell their story. And the largest character is of course Sally, of the constantly changing outfits and even more regular mood swings. She's beautifully brought to life by Humphries, who's convincing not just in creating the eternal drama queen whose life is triumph or disaster and nothing in between, but also in making her feel real and vulnerable, her understated victory over her mother at the end bigger than much of the flamboyance that preceded it. 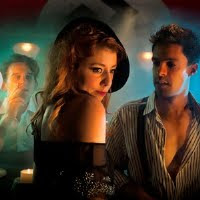 There's not a weak link among the supporting cast either: Big Favourite Round These Parts Oliver Rix turns up with a rather good American accent as the thoughtless playboy Clive Mortimer, breaking hearts and crushing dreams as casually as he throws money around. Freddie Capper as the secretly-Jewish Fritz and Sophie Dickson as the not-so-secretly Jewish girl he's in love with provide an interesting subplot, and Sherry Baines' late arrival to proceedings as Sally's mother is good for some ice-cold one-liners. Some of the characters get caught up in violent anti-Jewish riots but the play's real comment on the gradual rise of the Nazis in the background of their lives comes in the form of Joanne Howarth's Fraulein Schneider - the lovably matronly, matter-of-fact landlady's gradual, increasingly enthusiastic acceptance of antisemitic rhetoric becomes heartbreaking, and a sign that Isherwood and the audience are ready to leave Berlin behind.

With Southwark Playhouse's time in this building almost over they seem to be getting more comfortable with covering up The Vault's visually impressive, but impractical, split tunnel. It helps with the acoustics and even seems to have helped raise the temperature of the damp space a bit - but in this design the raised stage means that stomping or dropping things onto the floor also causes a pleasingly moody echo. Although other than that the excellent set and costume design is rather overshadowed - visually, this production is surely going to be memorable for vast acres of chest hair and teeth (Melling providing the former, Humphries and Rix the latter.) 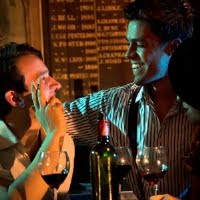 Yes, you could say that I Am a Camera is Cabaret without the songs; and you don't miss them for a second. In fact it's the all-singing, all-dancing version that's going to have a tough act to follow in trying to live up to this.

I Am a Camera by John Van Druten, based on Goodbye to Berlin by Christopher Isherwood, is booking until the 22nd of September at Southwark Playhouse's Vault.