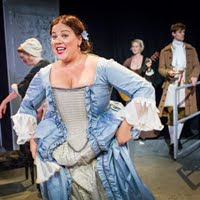 Southwark Playhouse seems to be on an absolute roll for its final season before moving house, a record they can hopefully continue to build on. But if there's one thing I hope comes along to their new venue it's Jessica Swale's annual production of a Restoration Comedy (the programme note that The Busy Body is "part of a series exploring the 'lost' female wits" makes me optimistic about there being more to come.) This year a couple of cast members from The Rivals and The Belle's Stratagem return with the director for a story by another early female playwright, Susanna Centlivre, with a few adaptations by Swale herself: The play's original prologue quickly gets ditched in favour of a new one, in the form of a song celebrating Britain's female playwrights from Aphra Behn to Polly Stenham and - a handy plug for coming attractions at the same venue - Anya Reiss.

Sir Francis Gripe (Gus Brown) is the very model of respectability, which is why so many people choose to make him guardian to their orphaned children and their inheritances. But behind the scenes he reveals his true colours, trying to hang on to as much of his wards' money as possible. Worst-off is Miranda (Alexandra Guelff,) whom Gripe has decided he's going to marry himself, but for all her protestations of love she has other ideas - she's in love with the gormless Sir George Airy (Matthew Spencer.) Gripe's own son Charles (Michael Lindall) loves Isabinda (Ella Smith) but her mother is determined to marry her off to a Spaniard. Charles determines to solve both his and George's romantic problems with a series of intrigues but the biggest problem could be the busybody of the title: Another of Gripe's wards, Marplot (Cerith Flinn,) is determined not only to find out what's going on but to "help" with the plots, invariably landing his friends in hot water instead. 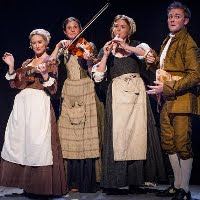 There's a number of signature touches to Swale's approach to this genre, like period costumes that disguise a thoroughly modern approach. The recent pop songs in Georgian arrangements that were a feature of The Rivals and The Belle's Stratagem are gone, but any disappointment that the cast aren't going to break into a Beyoncé track at any time is more than made up for by the songs that, like the new prologue, Swale herself has written and although the occasional lapses into anachronistic language are noticeable, it's always to great comic effect as the chorus of servants come up with ever-so-slightly more blunt descriptions of what the leads are getting up to. While the director has made some textual changes, it's in the attention to detail that she really shows her hand, and this isn't just a funny show: This is one where you just don't know where to look, because whoever you are watching, there's also bound to be someone else doing something funny elsewhere. No comic opportunity, big or small, has been missed.

As well as great performances the cast also excel at another trademark touch, the utterly relaxed and shameless flirting, ad-libbing and interaction with the audience. If you go to The Busy Body (and you really should,) try to get seats in the front row. It's audience interaction of the mildest, and also the silliest kind (if you are in the front row you needn't fear the cast dragging you onstage, but they may well sit on you.) Guelff's Miranda and Smith's Isabinda are great leading ladies, the latter hilariously flirty (sidling up to show the audience her new shoes and purring "sexay...") Frances Marshall and Kate Marlais bring strong support as their respective gentlewomen, and Marshall as Patch even gets her own romantic subplot with Henry Shields' Whisper. Brown's lecherous Gripe turns his own dubious charms on the ladies in the audience, Lindall gets to do a brilliantly inconsistent impersonation of a Spaniard, and there's a memorable scene involving George, Marplot, a lot of soot and an imaginary monkey. 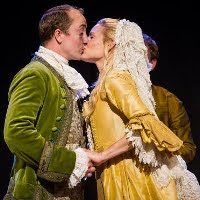 As well as the constant inventiveness the production is also loaded with running gags; like the Spanish stereotypes that surround Gay Soper's Spain-fixated Lady Jealous Traffic, the chorus' songs getting in George's way and always going on longer than expected, Isabinda's not knowing her own strength and regularly walloping Patch, and the female servants simpering every time the classically handsome Lindall crosses their path. For all the inventiveness, Centlivre's own writing still comes out well with a lot of her witticisms standing the test of time. But I think the thing that'll stick with me most is one of the director's additions, a wedding song that sounds beautifully traditional as the rest of the cast demand, in harmony, "How did you get her? She's so much fitter than you." (The final song and dance also has a great little visual gag, this time at the ridiculous Marplot's expense.)

Ironically, about half an hour in I was thinking this was good but the weakest of the three shows I'd seen so far, although the matinee audience being a bit quiet might have contributed to that impression. By the interval it had improved but the second act is just in another league and I think this may be my favourite yet, Swale having finely honed her craft to the point that this is one of those shows where I laughed so much my face hurt. And once again the attention to detail extends to the programme: In the past we've had a newspaper and an auction house catalogue (trying to sell off the cast and crew.) This time it's Marplot's secret diary, and with so many overpriced theatre programmes with nothing of interest in them, £2 for one with tons of extra comic material (including the full text of the new prologue) is a bargain.

Best of all, where I didn't catch the last two years' shows until their final day, I caught The Busy Body with two weeks yet to go in its run, which means I can recommend it, and I do. Go and see it (I'm already wondering if I can squeeze a return visit in.) If this doesn't make you laugh, then we're very, very different people.

The Busy Body by Susanna Centlivre with additional material by Jessica Swale is booking until the 6th of October at Southwark Playhouse.