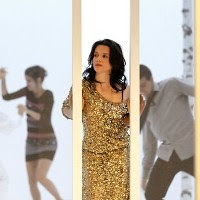 "Hello, is that Substance? Style here. Just calling to let you know your services will not be required this evening."

It seems an adaptation of Strindberg's Miss Julie is only ever a few months away. Earlier this year we had Patrick Marber's 1940s take on the play, and next year it gets a South African makeover. In between is Frédéric Fisbach's French production, Mademoiselle Julie, spending a short run at the Barbican. Juliette Binoche is Miss Julie, the "mad" daughter of a wealthy count. On Midsummer's Eve, most of the servants (played by a "local community cast," or "unpaid extras" as they're otherwise known,) are partying in the garden, seen through glass doors. But cook Kristin (Bénédicte Cerutti) is in the kitchen, left behind by her boyfriend Jean (Nicolas Bouchaud) who's been spirited away by the lady of the house to dance. When the exhausted Kristin nods off, Miss Julie steps up the flirtation a notch into full-on seduction. The morning after, the two fantasize about ignoring their backgrounds and running away together.

Sometimes this blog's title is more accurate than others, and the Barbican isn't usually a place where sightlines are a problem, even in the cheap seats. But Laurent P. Berger's set is a bad match to the auditorium. A modern white letterbox, with two layers of glass doors between which the action takes place. These gradually get removed, but the first half hour is spent with the actors between glass, mic'd up to compensate for it, their mics picking up their breathing and the noise of any moved prop. I reckon everyone in the Stalls and those in the middle of the Circle would have had a good view of the action, but in the Upper Circle the letterbox cuts off most of the garden at the back where Jean and Julie disappear to every so often; and the sides of both Circles will miss anything that happens to one side of the stage. The clinical-looking set (the white garden with bare trees looks more like midwinter than midsummer) only adds to the disconnect, and while it's not the production's fault, the fact that the surtitles tonight were often out of time (the next line would often appear and wait during a couple of minutes' silence for the actor to get round to saying it, and at one point the screen failed completely) didn't help with finding any emotional way into the story either. 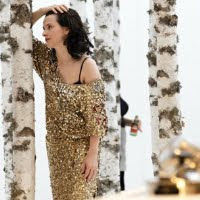 But the biggest problem is in the present-day setting, which completely robs the play of the class conflict at the centre of it. Jean and Kristin are well-dressed, even if Miss Julie is a bit more glamorous - but then it's a party. The gleaming minimalist kitchen has an equally modernist dining area curtained off to the side of it; when Binoche first walks through into the kitchen, there's no hint of there being anything unusual about it, let alone a shocking breach of social convention. And unlike the Young Vic's Three Sisters, the modern setting isn't accompanied by any attempts to modernise the text, so Kristin, as a modern-day employee, saying she needs to believe her boss is genuinely superior to her to be able to stay working there, or Jean saying he'd be refused certain jobs if he were married, seem thunkingly out of place. So if Miss Julie isn't trapped by her class, what is the story about? With a leading lady a bit older than the role usually calls for, Bouchaud is also older as the servant she seduces, and any suggestion that she might have fallen for his balding, hairy-backed charms for physical reasons is treated with tongue firmly in cheek. So without class or passion behind her actions, Binoche's Miss Julie ends up just being the crazy lady the staff think she is.

Fisbach regularly peppers his production with blackouts and pauses; at one point bright lights are repeatedly flashed at the audience like a slow strobe effect. And in the gap between two scenes, two of the servants from the party, one with a rabbit mask on, the other dressed like a white Christmas tree, come to the front and wander about for a bit. This surreal insert may be completely out of character with the rest of the production, or stuff like that might have been going on constantly upstage - I couldn't tell you, I couldn't see that far back. Ironic, really, that in a play about class divisions, the only noticeable one left in this production is that the complete action is only visible to those audience members able to pay top whack.

Mademoiselle Julie by August Strindberg in a version by Terje Sinding is booking until the 29th of September at the Barbican Theatre.