Theatre review: One Day When We Were Young 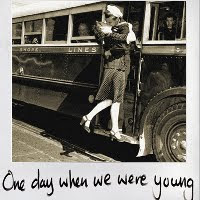 Touring company Paines Plough bring a series of new plays to London in the Roundabout Auditorium, a small wooden pop-up theatre that's reminiscent of the one Mike Bartlett displayed his Cock on. Set up in Shoreditch Town Hall, it's an intimate in-the-round space with three banks of seating with different-coloured cushions on them: At the box office there's jars with pink, blue and yellow buttons in them, and the colour you choose tells you which part of the auditorium to sit in - although, being small and in-the-round, it probably doesn't matter much where you end up. Judging by the spread of audience members, given that choice of colours, most people will go for blue, and pink is very unpopular. Andy and I sat in the yellow area for the first of the three plays, Nick Payne's One Day When We Were Young, directed by Clare Lizzimore.

It's a snowy night in 1942, and Leonard (Andrew Sheridan) and Violet (Maia Alexander) are in a hotel room together. He's about to depart for the War, and this possibly being the last time they'll see each other they're going to have sex. Both are virgins, but Violet's had a look at a book she found in her parents' house that she thinks should tell them all they need to know. And Leonard can't afford a ring, but if they both survive the next few years they'll wait for each other. 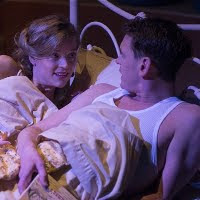 They both do survive, but when we next see them it's the sixties, on another snowy day, and they've agreed to meet and catch up following a chance meeting when Violet was out shopping for a washing machine  - with her husband and children. Leonard is still single, and as this second scene goes on we get to find out why the two never did get back together when the war ended, something he's clearly still hurt and confused by. The third scene makes an even bigger jump in time as we get up to 2002 and the elderly couple meet again when Violet decides to share a huge secret she's been keeping all these years. One Day When We Were Young doesn't have quite the innovation of structure of Constellations, which is probably my favourite of Payne's plays so far. Nor does it make any grand social or political points, but instead it has the smaller and no less worthy ambition of telling a small, simple story well, and bringing to life a couple of characters we get to feel something for. 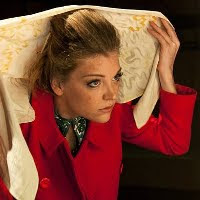 Lizzimore's production is well-cast, not just in terms of talent but in Sheridan and Alexander somehow having faces that wouldn't seem out of place in a wartime black and white photo. The story's jumps in time mean the two have to play a great range of different ages, and I really liked the simplicity with which it was achieved. Not just in terms of appearance (between scenes there's short musical segments where they change clothes and hairstyle but don't go in for any ageing makeup) but in performance, where they add a bit of a stoop and the weight of years without overdoing it. Interesting, in a week when I've had a lot of Twitter discussion with other theatre bloggers about how cross-gender performance can go wrong, to see another kind of performance that actors often overdo, treated with a restraint that makes them all the more effective - I really felt for the old couple of the final scene.

Andy and I weren't quite in agreement about the play, although he liked it he wasn't crazy about the final scene. Personally my last favourite was the middle one - perhaps because, having seen what the structure of the play was, I got impatient to see what the final jump in time would bring. We also disagreed about the recurring theme of the two discussing products of the time, which Andy thought was hammering home the time periods a bit. Personally I found the opening's excitement over Bournville chocolate, middle section's accumulation of electrical goods, and closing scene's mobile phone and discussion of whether Jaffa Cakes are a cake or a biscuit, an unfussy evocation of time passing. And, the more I think of it, quite a canny observation of how both the time period and where someone is in their life can be defined by their little luxuries. 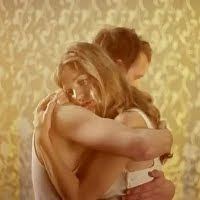 So there's not much that's earth-shattering about One Day When We Were Young but it's a good opportunity to see a simple, funny and moving story in an intimate setting with memorable performances.

One Day When We Were Young by Nick Payne is booking in repertory until the 27th of October at the Roundabout Auditorium, Shoreditch Town Hall.