Not a PREVIEW DISCLAIMER as such, apparently newspaper critics are not being invited to review this production until after its West End transfer, so the whole Globe run is either fair game, or we're to infer that it consists entirely of previews. In any case, one of the papers has already broken that embargo. Mark Rylance was the original Artistic Director of Shakespeare's Globe (ironically enough, since he presumably considers the venue's name to be inaccurate) and, for reasons I won't go into unless anyone is especially interested, an interview of his where he discussed his plans for the venue rather put me off the place, hence my never having visited it until four years ago. Having now seen plenty of enjoyable shows at the Globe though, I didn't feel the need to stay away from the return of Rylance and his Original Practices team, his first since 2006. As well as a new production of Richard III (which I've booked at the very end of its run to leave a decent gap after seeing the RSC's version) director Tim Carroll also brings back perhaps the most famous production of Rylance's tenure, with him as Olivia in Twelfth Night. Unbeknownst to each other, a pair of twins wash up on the Illyrian coast after a shipwreck, where they get confused for each other by the households of the Duke Orsino, and the object of his romantic affections, the grieving lady Olivia.

"Original Practices" means an all-male cast, and Johnny Flynn has done a season with Propeller which would seem a good sign for him taking a matter-of-fact approach to playing a female role, but I was disappointed by his Viola. He puts on a high reedy voice which borders on parody, and keeping it throughout the show doesn't leave much room for subtlety of performance. If the production was so keen on having a high-voiced Viola, surely they would have been better served swapping Flynn with Samuel Barnett, who plays her brother Sebastian, and whose voice has a naturally higher register. Rylance's Olivia is also quite high-pitched but he gets away with it (of course, getting away with performances nobody else could pretty much sums up his career.) As she floats around the stage in black mourning dress and painted white face, this is a rather vulnerable Olivia, eliciting both laughs and sympathy. Though an older Olivia, there's something quite childlike about her, like she's been sheltered by the father and brother she suddenly lost. Going by this and the recent RSC production, 2012 is a year of underwhelming Violas, and strong Olivias and Marias - in fact at times this becomes The Maria Show, Paul Chahidi stealing every scene he's in, especially opposite Colin Hurley's very understated Sir Toby, and mining every bit of comedy in the role, something that sadly can't be said of everyone. 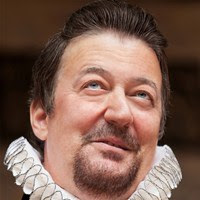 Though Jerusalem has made Rylance a hot ticket, undoubtedly what made this Twelfth Night sell out months in advance was the return of Officially Accredited National Treasure Stephen Fry to the stage for the first time since bad reviews led to a very public bout of depression in 1995. Perhaps unsurprisingly, his Malvolio is not the most vicious take on the puritanical steward you'll ever see, more self-important than mean-spirited. His warmth means his gulling is sad much earlier than it usually is, and although I do like a bit more vitriol in my Malvolios it's a different take that works well enough and, along with Rylance and Chahidi, Fry is the person who seems to "get" the little details in which opportunities for humour can be found, and whose presence livens up proceedings. It's also noticeable that the actor who's been away from theatre for nearly 20 years is one of the few to engage with the groundlings, such a familiar feature of Globe productions that it's notable here for its absence.

And there's lots of little things like this that made this overall a rather under-powered Twelfth Night for me. It's entertaining enough but never raucous, or anything close to it. The programme notes bring out the old standby about Twelfth Night being Shakespeare's bittersweet farewell to all-out silly comedy, and the production seems to be taking this melancholy very much to heart. The first half is particularly leisurely, which contributes to the hefty running time - over 20 minutes longer than the last production of the play I saw. Though the second half picks up energy (the "duel" between Viola and Roger Lloyd Pack's Sir Andrew is well done) it does of course have to suffer the consequences as wondering if you'll make the last train gets in the way of getting lost in the story. There's not much to actively dislike here, but I did feel that if this was the signature production of Rylance's tenure, perhaps I didn't miss much by skipping those years.

Twelfth Night by William Shakespeare is booking in repertory until the 14th of October at Shakespeare's Globe (returns only) before transferring to the Apollo Shaftesbury Avenue.