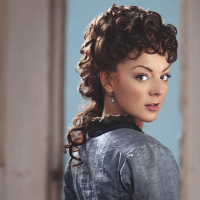 I've seen a fair selection of Ibsen plays in my theatregoing by now, but hadn't managed to see one of his most famous works, and what is considered one of the greatest female roles in all of theatre, Hedda Gabler. I've tried to remain unspoiled about the play, so Sheridan Smith is my first impression of what is apparently a very enigmatic character, interpreted by different people in a variety of different ways. I was perhaps expecting another Nora but Hedda is a much less straightforward figure. The much-admired daughter of a late general, out of a selection of suitors she's chosen to marry the unremarkable academic George (Adrian Scarborough.) On their return from a disastrously boring extended honeymoon, George cheerfully settles into their new life, not noticing Hedda's despondency. Feeling like she lacks control, his wife tries to wrest it back by viciously manipulating the lives of those around her.

After an inventively-staged Doll's House at the Young Vic earlier this summer, its older namesake down the road was inevitably going to offer a more traditional affair. Although, in its own way, Lez Brotherston's lavish set design has some of the same intention as Ian MacNeil's revolving flat, as Hedda and George's sitting room backs on to a number of glass-walled ante-rooms, through which some of the characters' behind-the-scenes lives can be glimpsed, including the violent denouement. 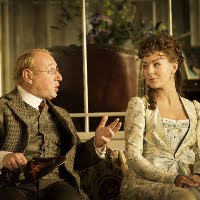 But that aside, Anna Mackmin's production of Brian Friel's translation is a fairly stately affair, centred around a still, steady performance from Smith. As Anne Reid's Auntie JuJu and Buffy Davis' harassed housekeeper Bertha seem to have cottoned on to from the start, but the dazzled George seems oblivious to, Hedda has an extraordinary sense of entitlement and ability for cruelty. When she goes into what she calls her moments of "possession" she can viciously manipulate those around her with sometimes deadly intent. My theatre companion tonight, Jim, whose appetite for Ibsen was whetted by the aforementioned production of A Doll's House, said afterwards that she gets what she deserves in the end. It's hard to sympathise with a woman whose great tragedy is failing to talk someone into killing himself to her precise specifications. But then how to judge that in the context of Ibsen, a playwright whose characters casually advise each other to commit suicide as a matter of course? I would ultimately view Hedda as a portrait of a dangerously mentally ill woman, but much as I like Smith I'm not sure I really got a handle on her performance here. 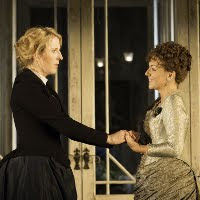 The supporting cast is easier to discuss, and features a lot of strong performances. Fenella Woolgar is excellent as Thea, an old friend  whom Hedda bullied at school and continues to do so, more subtly, now. Scarborough is of course an obvious choice for George, bringing a touch of bumbling comedy with a sense of quiet earnestness underneath it that means we can never dismiss the much-maligned husband. And tonight's audience seemed to particularly enjoy Darrell D'Silva as the Judge, a serial flirt with the capacity to delve into a much more sinister side. I wasn't entirely sold on the use of music in the production: Paul Englishby's come up with a cinematic kind of score that serves to back up significant moments; a few times it's very effective but often music just seems to creep in under a scene to incongruous and distracting effect. 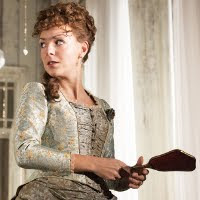 In thinking back over the play on my journey home, and while writing this review, I feel as if I've got a lot more of a handle on what the story is, and what the controversial title character is meant to represent; and indeed on why she's such an iconic figure. But certainly while watching it I really found it hard to know what comment was being made on her and her actions. This was, as I say, my first Hedda Gabler so it's hard to tell how much of my uncertainty over the play is down to Ibsen's original, and how much is Friel's adaptation, Mackmin's production and Smith's performance. I can't say the latter was bad by any means, but must admit I wasn't as blown away by her as I have been in the past, and had hoped to be again.

Hedda Gabler by Henrik Ibsen in a version by Brian Friel is booking until the 10th of November at the Old Vic.