PREVIEW DISCLAIMER: The newspaper critics aren't invited in until next week. 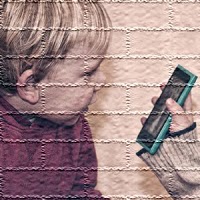 As well as the preview disclaimer, Privacy comes with the audience being sworn to secrecy about certain elements of the show. So I'm going to keep my review vague, but I'm also going to put most of it behind a text cut, and suggest you stop reading now if you have any plans to see the show, as you'll enjoy it more the less you know in advance..

When James Graham was promoting last year's revival of Tory Boys, his play about gay Conservatives, he refused to discuss his own sexual or political leanings, saying that knowledge of either would give the audience preconceptions about the play. This reserve about his private life came to mind a lot during his new play Privacy, which sets an avatar for Graham at the centre of an exploration of the invasions of privacy exposed last year by Edward Snowden. The Writer (Joshua McGuire) is convinced by the Director (Michelle Terry) to break his lifelong aversion to sharing anything personal on the internet, as a starting point of his research for this play. Here is a non-spoilery photo of James Graham with director Josie Rourke. 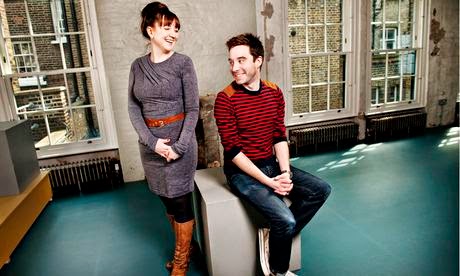 Casting actors of similar physical types to themselves, the characters are barely-disguised versions of Graham and Rourke, or at the very least we're meant to infer that (the real Graham has apparently been a fan of social media a lot longer than his alter ego.) The research takes the Writer to politicians, journalists and judges, as well as to a psychiatrist (Paul Chahidi) who helps him look into finding out who he is, and how that relates to the person he exposes on the internet. Chahidi, Gunnar Cauthery, Jonathan Coy and Nina Sosanya play multiple roles, their identities projected onto the back wall. The acting's uniformly excellent (Cauthery does a mean William Hague impression.) The audience are invited to keep their phones on but on silent, to take part in certain demonstrations of how much our own phones know about us that we might not know about ourselves. There's a glorious retelling of Romeo and Juliet, and a pair of young teenagers sitting near us gasped in horror at some of the surveillance software available to their parents. The show's good, but too long, and makes some of its points too many times. And that's as much as I can tell you, because some men in suits and dark glasses are banging quite loudly on my front door. They look suspiciously like James Graham and Josie Rourke in false moustaches.

Privacy by James Graham is booking until the 31st of May at the Donmar Warehouse.