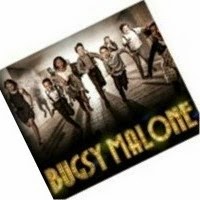 Somewhere in the first act of Bugsy Malone it strikes you that, before the idea became familiar through the film, Alan Parker had not only to come up with this idea, but also pitch it: A musical version of a 1930s gangster movie, but with a cast of children, and pie fights instead of gunfights. It's ridiculous but it works, and does so very well in Sean Holmes' production, the rather unlikely choice to inaugurate the officially reopened Lyric Hammersmith. Three rotating casts of children play the main seven roles, while an ensemble of adults and older teenagers back them up. Bugsy Malone (Sasha Gray, Michael Matias or Daniel Purves) is just trying to get somewhere with Blousey Brown (Zoe Brough, Thea Lamb or Eleanor Worthington-Cox) but he gets caught up in a turf war between Fat Sam (Max Gill, James Okulaja or Jenson Steele) and Dandy Dan (Oliver Emery or Tahj Miles.)

The game-changer has been the splurge-guns Dandy Dan and his gang have acquired, and which raise the technology of throwing a custard pie into someone's face to a new level. As Fat Sam's gang get picked off one by one, he asks Bugsy to help him get some splurge guns of his own. Backed up by the slick professionalism of the older chorus of dancers, the kids Holmes has assembled are an impressive bunch. As for Paul Williams' songs, it's not just Tallulah's (Samantha Allison, Sophia Decaro or Asanda Jezile) big number that gets stuck in your head afterwards, there's a lot more good tunes than I'd remembered. There's the odd moment that shows up the kids' inexperience, but it's the sort of thing that time and practice will iron out - I wouldn't be surprised if there's a few future big West End belters among tonight's cast. And frankly, the children's American accents show up many an adult professional actor. It's funny, sweet and performed with an undeniable sense of fun: You'd have to be pretty mean-spirited not to enjoy this Bugsy Malone, which for straightforward joy doesn't really put a foot wrong.

Bugsy Malone by Alan Parker and Paul Williams is booking until the 1st of August at the Lyric Hammersmith.