Theatre review: I Love You, You're Perfect, Now Change 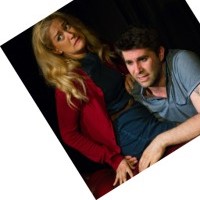 The Arts Theatre's new studio space Upstairs has only been open a few months but already seems to have become one of the most disliked venues in London. Fortunately the weather's cooled down a bit so I didn't have to deal with the sweltering heat people were complaining about last week, but it's still a far from ideal experience: After having to queue in a busy street, blocking the entrance to a comics shop, the audience gets to fight for a front-row seat as, between the lack of a raised stage or seating rake, and the pillar in the middle of the room, the views from any other row don't look too promising. I did snag the last front-row seat, but even then the wide, shallow stage makes anything other than upstage centre hard to see. At least what's actually on that stage is worth the trip: I Love You, You're Perfect, Now Change seems to get revived quite often on the fringe, but reuniting original West End Avenue Q cast members Julie Atherton and Simon Lipkin was what finally got me along to the show.

Atherton and Lipkin are joined by Gina Beck and Samuel Holmes for this musical revue composed by Jimmy Roberts with book and lyrics by Joe DiPietro, whose sketches and songs follow love and relationships from start to finish. 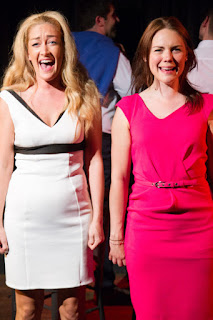 So the opening scenes mainly look at dating, with Lipkin and Beck going on a first date and deciding that, since they're both in a hurry, they should run through the whole relationship over the course of one evening to save time. DiPietro's sketches largely follow familiar clichés about dating, but he gives them all some funny twists - Atherton and Lipkin's unsatisfactory sex life is livened up by a firm of ambulance-chasing lawyers drawing up contracts that guarantee they'll do what each other likes. The best sketch sees singletons go to prison to be given dating advice by a lifer, Lipkin hilariously accompanying his speech with a makeshift sign language. 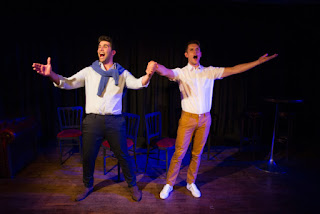 With the first act culminating in a wedding, the second has a lightly more bitter tone as it looks at how finding someone doesn't mean your problems are over. Some couples have to fit their relationship around their kids; Atherton delivers some great comic moments and has a nice line in pinched passive-aggression, but she also gets a quietly sweet scene as a divorcée re-entering the dating scene by recording a lonely-hearts video (something which dates the show a bit - it was first produced in 1996.) 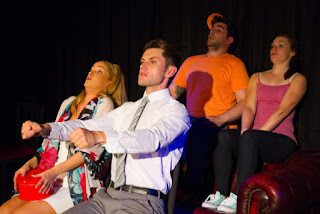 Eventually Holmes and Beck are a widowed old Jewish pair who meet and hook up at a wake, the loss of their spouses not meaning they've given up on love altogether. With DiPietro being the author of Fucking Men I was slightly surprised that we only get to see heterosexual pair-ups in the show (but again... 1996,) but the cast still give a fair bit of variety to their different roles. This is a funny show, although gently so, and if it continues to be regularly revived I don't think I'll be seeking it out again too soon, but Kirk Jameson's slick and inventive production has a cast that's got to be hard to beat.

I Love You, You're Perfect, Now Change by Jimmy Roberts and Joe DiPietro is booking until the 18th of July Upstairs at the Arts Theatre.