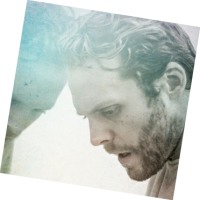 Caryl Churchill's A Number seems to be a popular choice for real-life father/son acting teams to take on; a few years ago I saw Timothy and Samuel West play opposite each other at the Menier, and for the latest revival at the Young Vic John and Lex Shrapnel are the father/son team-up. Although it provides strong roles, especially for the son, it still feels to me a bit of an eccentric choice to show off the family dynamic, as it portrays an especially twisted relationship. (And if you're planning on seeing it I recommend not reading the rest of my review until afterwards, as discovering the nature of the relationship is one of the play's strengths.) As the play begins Salter (John) is confronted by his son Bernard (Lex,) who's just discovered the truth about himself: He is actually Bernard 2, a clone of the first son Salter lost in a car crash. In fact as it turns out he's only one of a number of clones, the scientists having made more than requested, so they could follow their lives and discover more about nature vs nurture. But there's a lesson in that much closer to home.

Because Salter spends most of the play lying, and the biggest lie is that his first son is dead. In fact, he gave up the child at the age of 4, deciding he hadn't raised him right and was sending him down the wrong path. He sent Bernard 1 into care and created a new version so he could start again, convinced he could do a better job next time. 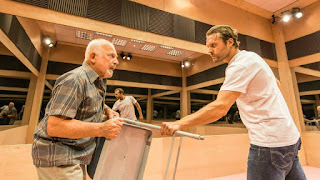 So the next time we see Lex he's playing Bernard 1, whose abandonment and childhood in care has left him an aggressive and possibly dangerous adult. He too has discovered the truth and has returned to confront his father, and he seems to have murderous intent towards his clone. The play's scenes alternate between Bernards 1 and 2, Shrapnel, L differentiating between the nervy 2 and explosive 1 without overplaying it. We also get to see another clone, Michael, who's never met Salter before and has grown up without his twisted influence. 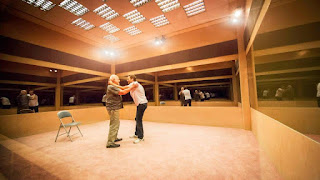 Michael Longhurst's production, which originated in Southampton, comes with a high-concept set from Tom Scutt, which reminded me of the setup for Game, as once again the audience is split into four groups, and led to different areas on all sides of the playing area, to watch through two-way mirrors. But this time the stage is a bare box, the mirrors themselves the point as they reflect Lex into infinite clones (and reflect the audience back to themselves between scenes.) Apparently the Shrapnels at no point before, during or after the show can actually see the audience, although presumably they can hear them as reaction from the other three sides was audible from ours. 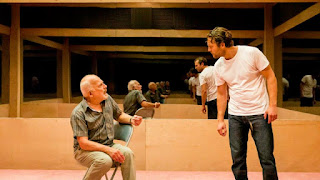 I'm not sure if this distancing from the action is entirely in the show's favour, as I didn't connect to the story as much as I remember doing before; although if you include the TV adaptation with Tom Wilkinson and Rhys Ifans this is the third time I've seen the play in a decade, and the unfolding of not just the story but the extent of Salter's sociopathic nature is part of its power. Certainly I advised Christopher to come to it knowing as little as possible, and being a Pinter fan he did say he preferred the Pinteresque mystery of the opening scenes to actually finding out what's going on. Churchill's high-concept look at identity may not be as effective when seen A Number of times, but it's certainly one of her best works and Longhurst's production has chilling performances - not just from Lex's three very different outcomes of the same DNA, but also from John's chilling revelation of how Salter never ceases to believe that humans, even those closest to us, can be replaceable.

A Number by Caryl Churchill is booking until the 15th of August at the Young Vic's Maria.