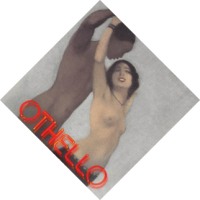 Iqbal Khan's production of Othello opens with a coup de théâtre courtesy of Ciaran Bagnall's set: The initial setting is Venice, and as Iago (Lucian Msamati) and Roderigo (James Corrigan) plot to reveal the secret of Othello's recent marriage, water bubbles up through grills in the floor, flooding part of the stage and creating the canal their boat floats in. It's an understated and effective start to a production that stays strong on visuals and atmosphere throughout. Hugh Quarshie plays Othello, the black general whose military skill makes him the go-to man when the Duke of Venice (Nadia Albina) needs someone to deal with a conflict in Cyprus. He takes with him his young lieutenant Cassio (Jacob Fortune-Lloyd,) newly promoted over Iago, who hasn't forgiven his general for overlooking him. He plots revenge on both men, and Othello's new wife is the tool he plans to use against them: If he can convince Othello that Desdemona is cheating on him with Cassio, his jealousy might destroy them all.

In a play inextricably associated with the title character's race, the publicity around the latest revival has centred on the fact that, for the first time at the RSC, Khan has also cast a black actor as Iago. 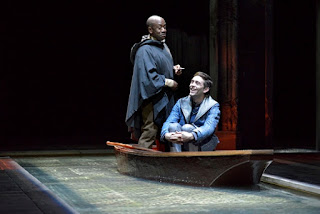 It's a different dynamic the production acknowledges from the start, in that scene on the canal as Roderigo, forgetting who he's with, refers to Othello as "the thick-lips." There's a touch of the Joe Pesci to Iago's reaction, a tense moment where it's not clear if he's joking along or about to break out in violence. This unpredictability is a recurring feature of Msamati's performance: Because of his confidence and comic rapport with the audience, there's a misconception of Iago as a Machiavellian genius who's got everything planned out, but Msamati's take focuses on how he's spinning a number of plates in the air and making it up as he goes along. When complete fluke brings the crucial handkerchief into his hands, he doesn't know how to deal with his good fortune at first, nervously cleaning the floor with it and knocking around boxes. 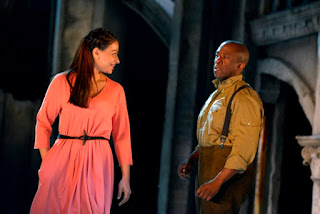 Although in modern dress, there's a sense of the Gothic to the design, even when the action moves to Cyprus - the suggestion is of a ruined cathedral where the soldiers have set up camp. The contrast is also there in Fotini Dimou's costumes, modern military wear replaced, during their downtime, with velvet suits for the men and elaborate dresses and tiaras for the women. It reflects the contradictions in the lead, making sense of how violently his personality changes: Quarshie's Othello is a dapper and suave one, but on-duty he's also the kind of military leader to sit back and let his troops torture captives. All Iago needs to do is bring the two sides of his personality together for Othello to start getting his own hands dirty 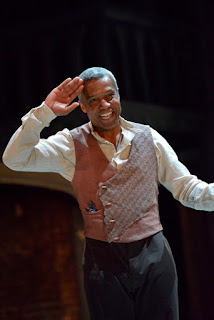 .
With only a couple of professional credits to her name Joanna Vanderham is a find as Desdemona, a character who can easily be bland. Despite the elaborate frocks she has a tomboyishness and steely pragmatism - her entreaties for Cassio to get his job back are more of a polite gesture on behalf of a family friend, than heartfelt begging that could realistically be misconstrued. Making her less of a wet blanket only increases the tragedy of her fate. 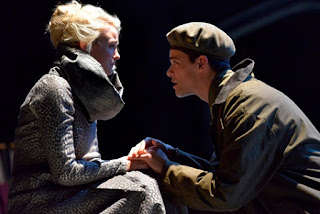 This is a long production but one of those that justifies its running time, its energy rarely flagging, and Khan coming up with plenty of nice little touches: I liked the fact that Scarlett Brookes' Bianca, a character who turns up out of nowhere late on, is introduced earlier in the scene where Cassio gets drunk (here including a rap battle against the Cypriot locals.) She has distinctive costume and make-up, and shows an early interest in Cassio, so her later reappearance doesn't come quite so much out of the blue. The stage's hidden pools of water also offer great visuals to Desdemona's final scene with Emilia (Ayesha Dharker,) adding haunting effect to the sad song they sing together. Any decent production of Othello reveals it to be a play about a lot more than race, and even though the casting of Msamati opens up new avenues to explore this side of the play it remains more complex and interesting in the strongest production of the current RSC summer season.

Othello by William Shakespeare is booking in repertory until the 28th of August at the Royal Shakespeare Theatre, Stratford-upon-Avon.