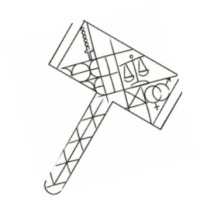 Of the three major productions of Measure for Measure in London this year, Shakespeare's Globe was always going to offer the least high-concept approach. I'm not sure I expected its opening to be quite so literal though: About 10 minutes before it starts, the Globe fills with actors, running around the groundlings and climbing up ladders to the higher galleries. Some offer the services of whores, others are preaching against all the debauchery around them. Meanwhile Dominic Rowan sits quietly onstage with his back to both the sexual freedoms enjoyed in Vienna, and to those offended by them. Because Rowan is the Duke, literally turning his back on behaviour that, in theory, carries the harshest penalties in his state. But he's let these laws lapse for decades, and doesn't know how to enforce them again. So instead he's going to take a leave of absence, leaving the city in the hands of the severe Angelo (Kurt Egyiawan,) who he thinks will bring back the morality laws.

He's right about this, Angelo quickly choosing who to make a public example of: Claudio (Joel MacCormack) is engaged to Juliet (Naana Agyei-Ampadu,) and has got her pregnant before marriage. The ancient laws demand Claudio's death, and that's precisely the sentence he's been given. 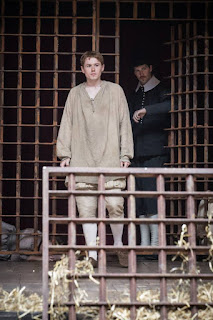 Dominic Dromgoole is a director whose work I seem to love or hate with no middle ground, and sadly this was the latter for me. This is his final production in the main house, and perhaps he plans to go out with a bang in the Swanamaker season because he certainly doesn't stamp any overall directorial identity onto this play - one which needs it more than most if the problem play isn't to seem more problematic than ever. Measure for Measure is listed under the Comedies in the First Folio, and Dromgoole's idea seems to be to reclaim it under that banner. But there's good reason that description has proven controversial over the centuries, and what's apparent here is that the bawdy dealings of Pompey (Trevor Fox) and Mistress Overdone (Petra Massey) haven't stood the test of time as well as other Shakespeare comedies. So there's lots of gurning, pratfalls and jiggling about, which admittedly got laughs tonight; but for me it was all too obvious that none of the physical comedy had any connection to the script. Only Lucio's constant slanders to the disguised Duke remain funny, but again Brendan O'Hea plays him as broadly as possible, just in case. 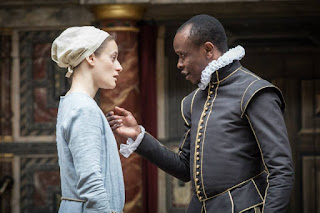 Of course the bigger reason for the "problem play" tag is its sexual politics and constant air of impending tragedy. Mariah Gale has a slightly otherworldly quality that makes her a good match for Isabella, Claudio's sister and a novice nun, sent to Angelo to plead for her brother's life. Eqyiawan's Angelo comes across as quite genuinely pious and uptight, but there's little to explain why his sudden lust for Isabella turns him monstrous. Dromgoole's production seems to be mostly focused on the other Dominic - this becomes much more the story of the Duke returning in disguise to observe how the city gets along without him in charge. 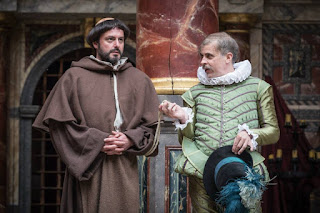 This, too, is played for laughs, with Rowan juggling the various plots he's put in place to try and save Claudio and expose Angelo. This is always one of the Shakespeare plots that most challenges suspension of disbelief - the Duke jumping through hoops having apparently forgotten he literally has power of life and death over ever other character in the play - and here he seems even more of an idiot than usual. The final bit of dubious sexual politics, in which he saves the novice nun from a man's clutches only to demand her for his own, is conveniently brushed away with the jig. I've long felt that the worst thing you can do with a problem play is act as if there are no problems, and this production, each of  whose scenes seems to be out for itself with no overarching theme to try and tie its disparities together, only confirms it for me.

Measure for Measure by William Shakespeare is booking in repertory until the 17th of October at Shakespeare's Globe.