PREVIEW DISCLAIMER: This was the first public performance of Tonight with Donny Stixx, which is previewing in London and Oxford before officially premiering at the Edinburgh Festival. 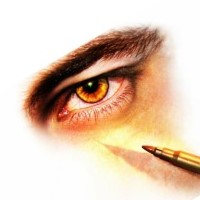 Philip Ridley's second new play this year is a monologue described as a companion to 2013's Dark Vanilla Jungle. That starred Gemma Whelan, so there's a nice symmetry to the fact that Tonight with Donny Stixx is performed by Whelan's Radiant Vermin co-star, Sean Michael Verey. Both monologues take the form of a confession of sorts, although whether Verey's character quite realises that's the crux of his story is another matter: Donny Stixx is a teenager who lost his mother when he was a child, and whose father is now also seriously ill; he's also a deluded amateur magician; and a notorious mass-murderer. He's gathered an audience tonight to entertain them with the story of his life, which he's going to tell very much on his own terms, even though people keep annoyingly interrupting him to ask about all those dead people.

I said at the time of Radiant Vermin that I've always found dark humour in Ridley's work, but he's certainly been hitting a rich seam of black comedy lately. Because there's no question that Tonight with Donny Stixx is very funny, with the signature twisted one-liners Ridley's got down to a fine art. Although not quite told in chronological order Donny's story is more linear and literal than most of the playwright's early work, while still feeling like something nobody else could have written. Donny is a dark creation and one with a tenuous grip on reality and responsibility, but he's also surprisingly sympathetic: In a story that takes in everything from suppressed emotion to online bullying, Donny, who seems to be slightly autistic, has had heartbreak early in his life, and family who've tried to help him through it by supporting his delusions, with eventually tragic consequences.

Veteran Ridley director David Mercatali directs Verey in a performance that includes moments of his comically juggling multiple characters like in Radiant Vermin, but most impressive is how multi-layered the actor makes Donny. Giving a good performance in the role of a terrible performer is hard enough, and there's a lovely awkwardness to the pre-prepared jokes and anecdotes Donny delivers, contrasting with the relaxed, natural way he speaks when he tells stories from his life. And then there's the third layer of violent unpredictability that suggests the darker side we know from the start will eventually take over. Even on a first preview this was impressive stuff and is bound to get even more so by the time it reaches Edinburgh. Funny, horrific and really quite moving by the end, Tonight with Donny Stixx shows all its creatives on top form. And actors really should be queuing round the block to work with Ridley, if these are the sorts of roles he writes for them.

Tonight with Donny Stixx by Philip Ridley is booking until the 28th of July at Soho Theatre Upstairs, then continuing to Oxford Playhouse and Pleasance Courtyard Beneath, Edinburgh.