In an RSC summer season that's focusing on often dark issues of prejudice and outcasts, it falls to Ben Jonson to provide the madcap comic relief, as Trevor Nunn returns to Stratford-upon-Avon to revive one of Jonson's classic con-men in Volpone. Henry Goodman plays the immensely rich Volpone who - as the stock tickers dominating Stephen Brimson Lewis' design suggest - made his fortune on the markets. But he's hungry for more riches and wants to have some fun acquiring them, so he turns other people's greed against them: Pretending to be on his death bed, he lets it be known that he has no heir, and soon there's a queue of people at his door bearing gifts, all in the hope of being named in his will. As his pile of gold gets ever-bigger, he also sets his eye on Celia (Rhiannon Handy,) wife of one of his victims, Corvino (Matthew Kelly.)

But his plot to seduce her, together with his attempts to steal Bonario's (Andy Apollo) own inheritance, prove too complicated a scheme for him to keep on top of, and the whole house of cards is soon crashing down on Volpone and his accomplices. 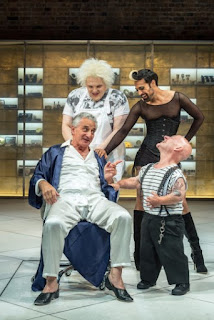 This balancing act of scams and schemes that has to crash eventually may be what suggested the modern-dress production, and the equating of Volpone's plots with the 2008 crash. It's not just a cosmetic updating, Ranjit Bolt's revisions to the text to include a lot of topical gags are actually pretty extensive, although never heavy-handed, and they provide one of the funniest elements of the production. Another is in the lead: The return of star casting to the RSC hasn't always been successful but Goodman justifies his top billing, throwing himself into Volpone's numerous tricks and disguises with a twinkle in his eye, but managing to make sense of the nastier places the character takes him as well. 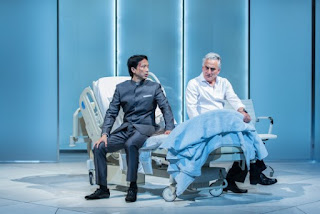 And the production does dip into these darker elements, particularly in Volpone's "wooing" of Celia - here an Eastern European arranged bride - which is unambiguously shown as attempted sexual assault. That season-long theme of prejudice is also subtly referenced, casting Volpone's assistant (Orion Lee) as a Chinese servant in a Mao suit: His success at tricking people including, eventually, his master, largely comes down to their underestimating him as all they see in him is the unquestioning subservience they expect. 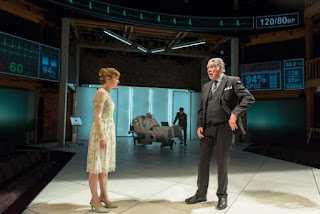 For the most part this is a frantic and very funny production, but anything with Trevor Nunn's name on it is unlikely to be the speediest show, and its running time in excess of three hours definitely feels bloated. Particularly problematic is the sub-plot of the self-important Sir Politic Would-Be (Steven Pacey) attempting to impress foreign visitor Peregrine, here an American back-packer (Colin Ryan.) Its connection to the main plot is negligible, it rarely raises a smile and serves mostly to slow down the main action, and I struggled to see why it wouldn't have best been cut. 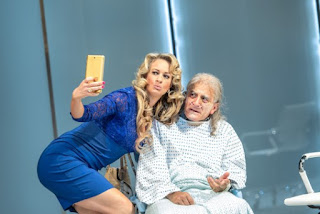 But there's a lot of witty touches in the modernisation, including Lady Politic Would-Be (Annette McLaughlin) as a gold-digging reality show star; while there's plenty in Jonson's own plot that still works, like Volpone's insistence that he be accompanied everywhere by a hermaphrodite (Ankhur Bahl,) a eunuch (Julian Hoult) and a dwarf (Jon Key,) which in this modern setting has a particularly surreal feel. The show does outstay its welcome on the Swan's unforgiving hard seats, but it has plenty to offer along the way.

Volpone by Ben Jonson is booking in repertory until the 12th of September at the Swan Theatre, Stratford-upon-Avon.