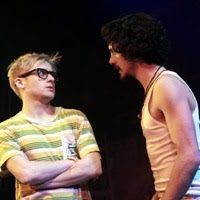 You can read my original review of Philip Ridley's latest play Shivered here; at the end of it I said I could have gone straight back to the theatre and watched it again. That, of course, wasn't possible (apparently even actors have homes to go to) but as the end of the run neared I increasingly wanted to catch the show again before it ended, and a few days ago booked for its final performance last night.

It's no secret that as far as I'm concerned, Shivered is the show to beat this year, and a second visit did nothing to dampen my enthusiasm. The scenes are shown out of chronological order, which means on a first viewing one of the pleasures is in putting the story together in your head and realising how seemingly innocuous events seen early on have a greater significance. But even without this element of surprise, there's satisfaction to be found in the dramatic ironies that pepper early scenes (Gordy's bullshit "story of Baby G" features an event that closely mirrors how Mikey's story will end, as well as links to Alec's experiences in the Middle East.)

There's also the opportunity to look at the excellent performances in Russell Bolam's production again: Andrew Hawley's Gordy (the play's twisted saviour figure) is such a scene-stealer in the first act he can be all you remember about it, but this time around I also appreciated Joseph Drake's adorably comic work as young Ryan, as well as his heartbreakingly intense end to the act (a scene which the person sitting next to me admitted sent him into the interval shaking.) In fact Ridley gives all his talented cast a chance to show range: If Robbie Jarvis' shellshocked Alec (jumping abruptly from loving older brother, to screams of rage, to hisses of suspicion) is the most obvious example, the out-of-sequence storytelling means everyone has to turn on a sixpence. Amanda Daniels' Evie goes from obese fake medium to confident new woman, having lost weight through a miracle a lot less supernatural than the ones she sells. Olivia Poulet underscores the whole thing with her restrained performance as Lyn. And if Simon Lenagan's Mikey doesn't appear in as many scenes as the others, he makes up for it with his devastating climactic speech (which Rob has quoted here - spoilers, obviously) and which features the most characteristically Ridley-esque violent poetry of an otherwise comparatively naturalistic play.

Devastating but with real heart and a surprising amount of laughs to cushion the shocks, my second visit to Shivered didn't disappoint.
Posted by nick730 at 20:38