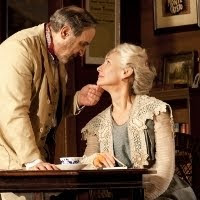 If an actor gets too closely associated with a single role, he can end up trapped in it, and be seen as nothing more than that one part. So says Poirot, and he should know what with the little grey cells. In fact David Suchet has made sure to avoid the fate of his character James Tyrone, and his latest foray into stretching different acting muscles on stage is Anthony Page's new production of Long Day's Journey Into Night. Eugene O'Neill's play is hard work, but rewarding with it. The title gives away the structure as we join the Tyrone family in their summer house by the sea, and rejoin them several times during a day and night when a lot of harsh realities come out.

Youngest son Edmund (Big Favourite Round These Parts Kyle Soller) suffers from the onset from an ominous case of Period Drama Cough, and with a phone-call due from the doctor, the family will have to stop pretending they don't know he has Consumption. There's also vague allusions to an illness Edmund's mother Mary (Laurie Metcalf) recently recovered from, but again this is a harsh truth to be faced in the long day: Ever since taking morphine after Edmund's birth, Mary has been addicted. She's been particularly good at hiding her latest relapse but her behaviour is now staring to give her away.

O'Neill's play is full of recriminations: Older son Jamie (Trevor White,) the black sheep of the family, is blamed for giving Edmund ideas that saw him travel the world and get sick. Edmund himself lives with the knowledge that his birth started his mother's addiction. As for successful actor James, he's notorious for being a miser about the tiniest thing, then mortgaging himself to the hilt for questionable land deals. Are his penny-pinching ways, as his sons argue, responsible for many of the family's ills? It's an intense play, and one which I find uncomfortable at times because of a couple of personal things that resonate. But for all its darkness this production sucks you in, largely through the power of the performances. 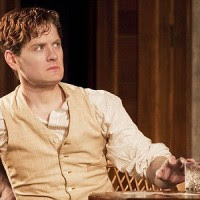 The four main actors are well-cast and take their characters through a believable journey, not easy when they have to go through so many emotional states. As the house gets enveloped in fog (occasionally seeping through the French windows of Lez Brotherston's set) so too do the characters get fogged, Mary by drugs, the three men by drink. Soller and Suchet carry much of the second act with an intense two-hander scene spanning from recriminations to father-son bonding, while Metcalf is downright brilliant as the mercurial mother, a completely different person depending on where in her cycle of highs and lows she is, but always astonishingly in-the-moment. In the supporting role of housemaid Cathleen, Rosie Sansom also provides some necessary light relief. Long Day's Journey Into Night is one to steel yourself for before going in but the performances make it worth the visit to the Apollo. (Once again I can't report back on the view from my £23 Balcony seat. According to the website, the front row Upper Circle seat I was upgraded to should normally cost between about £40-£50. About a third of the stage was obscured, but fortunately there was nobody sitting behind me so I was able to lean forwards and get a full view. I don't normally take the name of this blog so literally, but when it's the theatre that more or less single-handedly gave me the idea, I kinda feel like I should.)

Long Day's Journey Into Night by Eugene O'Neill is booking until the 18th of August at the Apollo Shaftesbury Avenue.