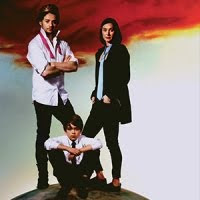 When you go to as much theatre as I do, certain Shakespeare plays do keep cropping up. Two Lears in a year wouldn't be that unusual but two King Johns? I was excited when the RSC's new one at the Swan was announced last year, and booked straight away, even paying a bit extra for a front row seat since it's such a rarity (at the time I'd last seen it a decade ago.) Since booking, a smaller-scale production appeared much closer to home, so this is now my second King John of 2012. But even if the play's not quite Hamlet it still rewards getting to know it better, and this turns out to be a show well worth making the trip to Stratford-upon-Avon for.

Especially considering it's a History, King John is rather a silly play. In fact Maria Aberg's production is possibly the least silly I've seen, scenes like the stroppy citizens of Angers defying two kings can be positively Pythonesque, but not so much here. Instead of letting the plot's constant back-and-forths determine the whole tone, Aberg goes fairly high-concept, and takes us to a party. Naomi Dawson's set is the kind of exclusive club where celebrities like Alex Waldmann's tattooed, designer-outfitted King John hang out. This party's celebrating his coronation (well, his first - he somehow manages to rack up three without even getting deposed between them) but John's older brother Geoffrey, now dead, has a surviving son, Prince Arthur (Jacob Mauchlen in today's matinee.) Backed by King Philip of France (a disconcertingly beardless John Stahl,) Arthur's mother Constance is determined to get her son onto the English throne.

King John is (comparatively) rich in decent female roles but Aberg has added another, by turning the late Richard the Lionheart's illegitimate son into a daughter. She's also conflated the role with that of Hubert (the man charged with killing the abducted Arthur, but unable to go through with it.) As well as the extra lines, the more complicated character arc this gives her means that Pippa Nixon's charismatic Bastard ends up as much the lead role as John. The gender swap also makes for an incestuous sexual frisson between the king and his illegitimate niece. (This King John is a bit incesty in general, as he also seems a teeny bit too fond of his mother; although since Dawson's costume design doesn't exactly underplay Siobhan Redmond's ample rack, it's probably not entirely Waldmann's fault if he keeps staring at it.)

I was less convinced by another gender swap, the shit-stirring Cardinal Pandulph (Paola Dionisotti) turned into an Anna Wintour clone. I can see the reasoning behind it - in a modern-dress production it's hard to buy the Church's terrifying hold on otherwise all-powerful monarchs. But we would have needed to believe both courts were pathologically fixated with fashion for such a figure to have this hold on them, and the vibe is much more of the rich and famous than of the fashionable and desperate.

The party theme continues (even though this isn't Jacobean Tragedy, there's a wedding disco to make up for the lack of one in The Duchess of Malfi; complete with karaoke and Dirty Dancing parody.) But after the interval it's the day after the party, the stage littered with confetti and balloons, which the cast have to fight their way through. If Waldmann's King doesn't quite command the first half he comes into his own in the second, railing and bargaining to try and keep hold of his kingdom. There's one last party as the poisoned, hallucinating John, assailed from all sides by news of his approaching end, dances alone, frantically in the spotlight. Incidentally, in the scene where John makes penance to Pandulph, Waldmann had to come right in front of my seat to take his shirt off - it's nice of Aberg to block the play entirely with a view to my interests. (With Waldmann constantly puling his sleeves up, or wearing vests, or in the penance scene actually keeping hold of the crown by tensing his forearms, this production would basically be porn to anyone who's uncontrollably aroused by actors' forearms. But of course no such people exist so it's not an issue.)

In supporting roles Susie Trayling as Constance and Oscar Pearce as a rather middle class Dauphin are memorable, while Joshua Jenkins's Essex doesn't actually have much to do, but does tend to pull focus in his scenes by standing around looking improbably handsome.

It's good to see that Rupert Goold isn't the only director the RSC allows to show a bit of directorial flourish. Not all of Aberg's ideas work but the overall hit rate is good, and she stamps her own identity on the play. It may not be the funniest King John ever but there's a lightness of touch all the same, and a bit more emotional kick than such a frantic story usually achieves.

King John by William Shakespeare is booking in repertory until the 15th of September at the Swan Theatre, Stratford-upon-Avon.