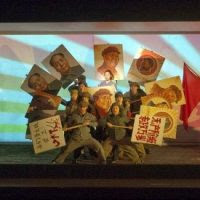 Jung Chang's memoir of three generations of women in Maoist China, Wild Swans has been a blockbuster book for 21 years. It now gets its first stage adaptation by Alexandra Wood, directed by Sacha Wares. The book is by all accounts a bit of an epic, but instead of trying to recreate that the creative team has opted to pare it down to 90 minutes, creating an explosion of colour that looks like a carnival but actually reveals the fear, hunger and crushed idealism underneath it. Yu-Fang (Julyana Soelistyo) had her feet bound as a child, and in her teens was forced to become the concubine of a warlord. When the Communists take over, this "privileged" past is still held against her and her family.

Her daughter De-Hong (Ka-Ling Cheung, whose performance I found rather overwrought) is a loyal party member, and marries the similarly idealistic Shou-Yu (Orion Lee.) As the years pass they see how from the highest level down, anyone with power will happily abuse it in the name of the people, but Shou-Yu's refusal to let go of his idealism has catastrophic consequences for all. The third generation, Er-Hong (Katie Leung) who represents the author, is able to break out of the cycle but only through leaving China altogether. 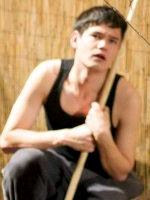 I wonder if fans of the book (I haven't read it myself) will be expecting a more detailed, reverential adaptation. Personally I think cutting down three decades to what amounts to a snapshot has been a successful choice, the show rather effectively gives a flavour of the appalling conditions people had to put up with in the name of the common good without resorting to melodrama. With Miriam Buether designing the visuals were always likely to be strong, and her shallow, wide stage starts as a busy market as the audience enter, then gets transformed in a number of simple but effective ways - one scene change in particular drew gasps at how incredibly simple but clever its conceit was. (There were different kinds of gasps when a stage manager had to run on stage when a special effect of books being burned ended up a bit more realistic than planned, but that's live theatre for you.) And if the sets, costumes and simple but heartfelt story don't do the trick, Oliver Biles (pictured,) who plays a number of supporting roles, is not unpleasant to look at either. (Oh shush, he's 22, I checked.)

Wild Swans by Jung Chang, adapted by Alexandra Wood, is booking until the 13th of May at the Young Vic.