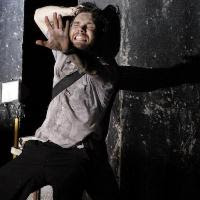 The original production of Disco Pigs helped make the names of both Enda Walsh and Cillian Murphy. The two have now teamed up again, Walsh (who also directs) writing solo show Misterman especially for Murphy. Thomas Magill is a disturbed young man, living with his disabled mother in a small Irish town. Since his father's death, they lost the shop that was their livelihood, and Mammy subsists on Jammie Dodgers while Thomas wanders around Inishfree, recording every conversation he has with the locals.

Misterman could easily be performed in a bare room but designer Jamie Vartan has gone all-out and filled the Lyttelton stage with an enormous, deserted warehouse, where Thomas has set up a number of tape players to play back his recordings. Apart from the occasional voice from these tapes it's a monologue, Murphy taking on every character in the town as Thomas relives a fateful day. Filled with a religious mania, he sees himself as a kind of evangelist, preaching to the townsfolk while judging them, noting down their sins and misdemeanours in his many little notebooks.

The wild-eyed actor more than lives up to the confidence placed in him, inhabiting the numerous characters, giving them all individuality while still showing them through the prism of Thomas' judgement. The monologue itself, Murphy's performance and Vartan's dangerous-looking set all help create an almost apocalyptic sense of menace, but in the earlier scenes especially there's still room for some appealing comic moments. As Thomas is compelled to reenact the dark conclusion to the day, the warehouse itself seems to act against him, the tapes going out of control and the building starting to fall apart, apparently in response to the story being told within its walls.

There's the odd moment that flags but Misterman is worth seeing for the performance and the odd, sinister poetry of the text. Jan had a very specific metaphysical interpretation of what was going on - he thought Thomas was dead, the apparently living warehouse his purgatory. Perhaps because I've seen other Enda Walsh plays before I was loath to pin down its more surreal elements that much. But however literally you view what happens onstage, Misterman is like a vision of one man's personal apocalypse.

Misterman by Enda Walsh is booking in repertory until the 28th of May at the National Theatre's Lyttelton.