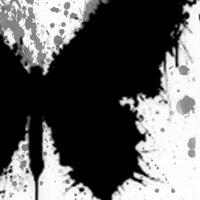 The Philip Ridley-fest continues with a revival of Mercury Fur at the Old Red Lion. The country is in chaos, the young people caught up in world of riots, looting and indiscriminate violence. While the poor underclass turn on themselves, bankers seem to remain a wealthy elite, untouched by the anarchy and holding a certain amount of control over it through their money. The pre-publicity for this show quite gleefully dug up the original reviews from the play's 2005 debut, dismissing it as far-fetched; and compared them to news images from last August. This being Ridley though there's a fantastical touch to his apocalyptic dystopia: Some time in the past, a freak storm rained sand and brought with it numerous new species of butterfly. When eaten, the butterflies have a narcotic effect, creating hyper-realistic hallucinations, usually of a violent nature. Addicted to their effect, people start to seek it out in reality as well.

Elliot (Ciarán Owens) is the "butterfly man," who deals the new drug from his ice cream van but doesn't take it himself. His younger brother Darren (Frank C. Keogh) however is addled by the stuff. At the start of the play we meet the siblings as they break into an already-destroyed flat, to prepare it for a party later in the day. When the Party Piece (Ronak Raj) is introduced, a dazed abducted schoolboy who's been kept in a cupboard for a few days, the picture starts to form of exactly what kind of party this might be.

A downside of the sheer volume of Ridley plays in London at the moment is that the author's favourite recurring memes become very obvious when they crop up again, and you could almost tick off a checklist: As well as the insect-eating there's injured legs, ritual storytelling, and descriptions of both sex and love couched in ultra-violent language. Still, the familiar themes don't ultimately detract from the intensity of the play in Ned Bennett's gory production.

Elliot and Darren form an interesting pair with a believable dynamic, and as the play goes on it gradually populates itself with new characters, all just as well-acted. There's Elliot's girlfriend, the gender-ambiguous Lola (James Fynan,) and her brother Spinx (Ben Dilloway,) the gangster behind these parties. A Sound of Music theme that pervades the play finds its apotheosis in the blind, epileptic Duchess (Katie Scarfe,) and near the end we eventually meet the Party Guest (Henry Lewis,) in many ways part of a very different world than the other characters inhabit. But most memorable, and the beating heart of what might seem on the surface a brutal play, is the frail but always hopeful butterfly addict Naz, Olly Alexander marking himself out again as one to watch.

If some of Ridley's themes are familiar they reach a crescendo of sorts in Mercury Fur, and if it's the playwright's most nightmarish work that makes it even more impressive that another of his trademarks also remains intact, and there's some small sense of redemption to be found in this bleak world. It's not my favourite of the playwright's works, but it's still definitely recommended.

Mercury Fur by Philip Ridley is booking until the 14th of April at the Old Red Lion Theatre.