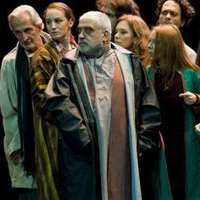 The Globe's main contribution to the 2012 World Shakespeare Festival is Globe to Globe, in which all of Shakespeare's plays are performed by international companies, each in a different language. (So, remind me, who's doing The Two Noble Kinsmen? *cough*) Most of the shows are getting just two performances each, a handful of the more popular ones will get three. The Globe is encouraging audiences to collect the full set with a £100 deal for Yard tickets to all shows but I'm being a bit more selective and only going to shows I have a particular reason to want to see. So being half-Greek my first visit, accompanied by my mum and sister, was to the National Theatre of Greece's offering. The heavy rain that's been a feature all week took a break for tonight's performance, although if it had persisted it wouldn't have been too inappropriate for Shakespeare and Wilkins' story of storms, shipwreck and the high seas, Pericles.

Performed in a fairly colloquial Demotic Greek translation by Dionisis Kapsalis (except for the occasional lapse back into English for comic effect) Giannis Houvardas' production is well suited to the Globe, being pretty simple and frantic, and except for Christos Loulis' Pericles, the cast do a lot of multitasking. Penny, who's lived in Greece more recently than me, was excited to see a number of familiar faces from Greek TV, especially Dimitris Piatas (pictured, at the front) whose warm, cuddly old Gower narrates the action and who, more than anyone, looks simply thrilled to be performing on this stage. In fact everyone seems to slot very comfortably into the unique spirit of the Globe, and the more the play goes on, the more the venue's trademark combination of both scripted and ad-libbed interaction with the groundlings starts to appear in their performances.

The publicity for Globe to Globe has been pretty silent about whether the plays would be surtitled or not. As it happens there's a compromise: Screens on either side of the stage don't actually show the English dialogue, but flash up summaries of what's happening in the current scene. Though be aware, if you're in one of the four bays nearest the stage on either side, the onstage pillars obstruct the view of these screens. This wasn't a problem for us since we all speak Greek but at the interval my mum spoke to some people who don't speak a word of it, but who were still following and enjoying the show; largely perhaps because the actors have pitched their performances big enough to help any non-speakers along.

Houvardas has opted for a fairly silly approach to this largely unloved part of the canon, which pays dividends. I don't know how the other companies in the season will approach their task but in this case at least it's great to see a guest company not just transferring an existing production but enjoying the challenge of adapting it to a very particular kind of performance space.

Pericles by William Shakespeare and George Wilkins in a translation by Dionisis Kapsalis is part of Globe to Globe, which continues until the 9th of June at Shakespeare's Globe.