Theatre review: The Book of Mormon

PREVIEW DISCLAIMER: The Book of Mormon invites London critics in next week. 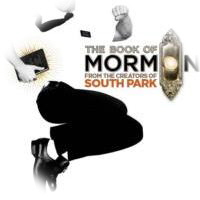 The Book of Mormon has had a lot to live up to. Avenue Q is one of my all-time favourite shows, so its co-creator Robert Lopez teaming up with South Park's Matt Stone and Trey Parker for a new musical was an exciting prospect even before the rave reviews and Tony awards started flooding in. Add to that the fact that when I went to New York in 2011 I tried a number of times, unsuccessfully, to get a ticket to the Broadway production via its daily lottery (which is being replicated for the West End run) and this has been a long time coming. I went along with much of the same group of people I made several trips to Avenue Q with (bar Vanessa, who realised she'd get disowned if she saw it before her daughter) and the good news is it wasn't long before Evil Alex's loud, rather hysterical laugh started up.

Elder Price (Gavin Creel) is the very model of the blond, blue-eyed Mormon missionary, and great things are expected of him. But his dreams of converting the unbelieving of Orlando, Florida are scuppered when he's not only posted to Uganda for two years, but given the chubby, nerdy fantasist Elder Cunningham (Jared Gertner) as a partner. When faced with a village full of desperate people terrorised by a vicious General (Chris Jarman) it's actually Cunningham who finds himself better equipped for the situation. 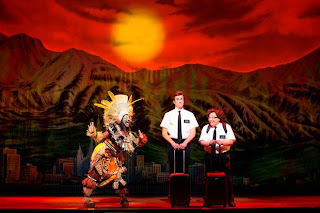 With Parker and Stone behind the show it was always going have a lot of shock tactics behind it, and there are indeed many moments to make you gasp. Their film Team America: World Police features a notorious Rent-parodying song called "Everyone Has AIDS" and it's a casually stated fact that so does almost everyone in the Ugandan village. And it's not every mainstream musical that features female circumcision as a major plot point. But as with the digs at the Mormon faith itself and, by extension, all religion, the team somehow manage never to cross the line into offensiveness. It's partly because the show picks its targets so precisely - there's plenty of digs at The Lion King's saccharine vision of Africa, but for the real place the criticism is firmly aimed at the warlords who make everyone else's life a misery. The show gets a lot of mileage out of fact that the Mormon religion is based on mythical golden gospels nobody's allowed to see, but this is extended out to cover the blind faith that all religions demand. 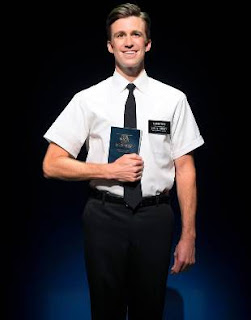 It's also the fact that, like Lopez's previous show, a genuine sweetness balances out the near-the-knuckle humour, swearing and even violence, without ever being allowed to become cheesy. So Cunningham is smitten by young local girl Nabulungi (Alexia Khadime) but that doesn't mean he can get her name right (a further Avenue Q connection is Giles Terera, the original West End Gary Coleman, who plays Nabulungi's father.) And religion actually gets let off the hook for the ability of stories to help people, even as it's made clear that throwing together different plot points of Star Wars and Lord of the Rings is roughly as effective as any book of scripture.

The writers have come up with a collection of catchy songs that couch their more controversial lines in a poppy sweetness, and if anything the second act is better than the first, including songs like Cunningham and Nabulunghi's duet "Baptize Me," in which everyone but them can see the subtext a mile off, and the big number "Spooky Mormon Hell Dream," which best typifies the difficult tightrope act the show as a whole pulls off so well, of skewering the traditional glitzy Broadway musical while actually being a perfect example of it. Led by the visiting American duo, the whole cast throws themselves into the fun and Casey Nicholaw's (also co-directing, with Parker,) energetic choreography.

Even before the reviews come in The Book of Mormon has been selling like hot cakes, so if you want a ticket that won't break the bank you'll have to book well in advance (or brave the elements for the lottery.) Having waited 18 months for it myself, I can say it's worth the wait.

The Book of Mormon by Trey Parker, Robert Lopez and Matt Stone is booking until the 24th of August at the Prince of Wales Theatre.